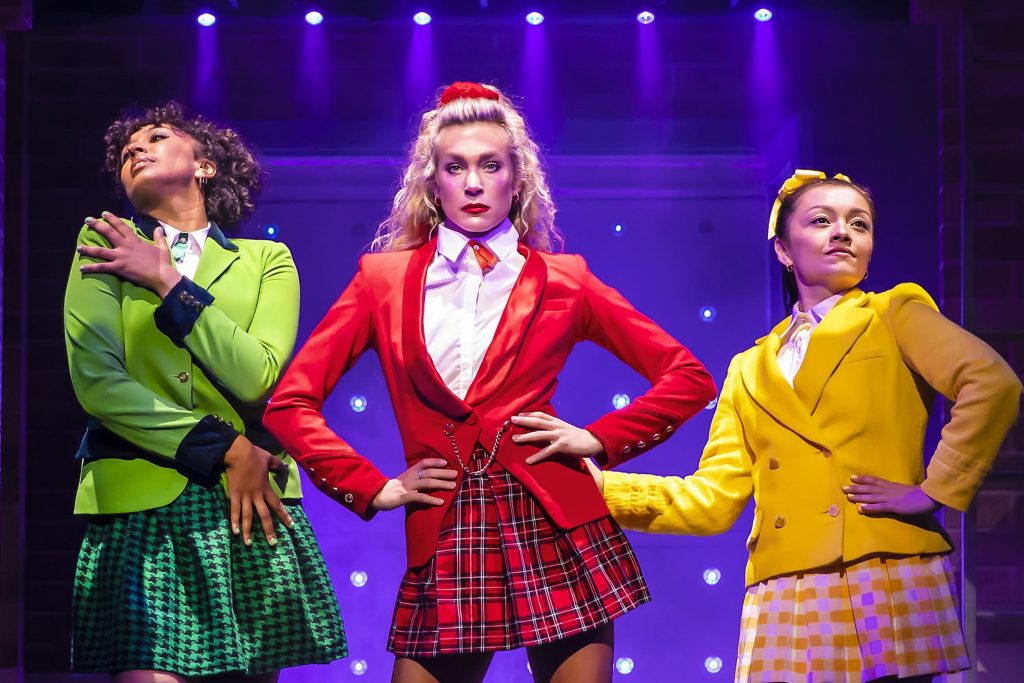 Greetings and salutations welcome to Westerberg High, a school run by the popular kids where social hierarchy is taken to the extreme. Indeed, “College will be paradise if I’m not dead by June” is the ominous foreboding Veronica Sawyer sings in Beautiful, the opening number of Heathers the Musical.

Black comedy at its finest, Heathers by Laurence O’Keefe and Kevin Murphy, ran at The Other Palace Theatre, between June, and August 2018. Thanks to a hugely popular sold-out run, the show transferred to Theatre Royal Haymarket in September 2018. Back by popular demand, the show takes up a second (limited) residence, with a separate UK Tour set to kick off in Leeds on 28 July 2021.

O’Keefe’s previous work includes Legally Blonde the Musical, but don’t be lulled into thinking there will be any of that comfortable saccharine here. The musical, based on the 1989 movie Heathers, starring Winona Ryder, Christian Slater, and Shannen Doherty, was a box office bomb resurrected only through high rentals, subsequently propelling it to cult classic status. The musical also has a huge cult following and picks up exactly where it left off in 2018 with a refreshed cast, and a socially distanced audience (hopefully not for much longer).

Veronica Sawyer, played by vocal powerhouse Christina Bennington, sits within the dregs of high school society. Invisible, she is unashamedly mocked and jeered at by her peers whilst fighting her aspirations to be popular. Her gift for forging handwriting is soon discovered by the most popular Westerberg clique, a girl gang in the form of the ferocious, colour coordinated, croquet bat-wielding Heathers.

Seduced by the prospect of popularity, acceptance, and an easy life, Veronica dives headfirst into the security and exclusivity of the Heathers. The fly in the ointment appears in the form of mysterious new kid JD (played by the hugely talented Jordan Luke Gage) who captures Veronica’s attention.

Heathers boasts an incredibly accomplished cast. Christina Bennington is outstanding in her portrayal of Veronica. Bennington evokes a palpable vulnerability and does justice to Veronica’s challenging journey. She snuffs out any risk of campiness in the material and her delivery of the musical numbers is next level.

Jordan Luke Gage plays JD with menacing darkness combined with a boy-next-door charm, a combination that is cleverly unsettling. His painted-on smile and icy stare serve to further cultivate his manipulative character. He uses his trench coat like a cloak, which only serves to enhance his creepiness. Gage has a beautiful voice and delivers a performance during Freeze your Brain with charm and a boyish innocence, hinting at his own inner pain. But it is where Gage and Bennington share the stage that Heathers excels, their duet Seventeen is touching and spine-tingling powerful almost serving to provide JD with some form of redemption.

Bennington’s morally compromised Veronica is complimented in droves by Jodie Steele’s stand-out portrayal of the heinous Heather Chandler. Steele is an incredibly dynamic and versatile performer and belts out the catchy number Candy Store with such authority that she utterly commands the stage. Steele is revisiting this role, having portrayed Heather Chandler in the previous two runs. Her performance is bitchier, sharper, and meaner than ever before. Steele has clearly been sharpening her claws and polishing her croquet bat in anticipation for this return.

Frances Mayli McCann and Madison Swan (as the downtrodden Martha) shine in their solos, Lifeboat, and Kindergarten Boyfriend, both delivering startlingly strong vocal performances. Cheerleader Heather McNamara is arguably the most conflicted Heather and Lifeboat serves to provide some serious character development. Ross Harmon and Joaquin Pedro Valdes put in strong performances as the intellectually challenged and predatory jocks Kurt and Ram.

The talent of the wider cast and ensemble is staggering. Lauren Ward performs a dual role, but it is in the guise of self-serving teacher Ms. Fleming that she delivers an animated performance during Shine a Light. Steven Serlin and Simon Bailey pull out all the stops in their raucous number, My Dead Gay Son.

Heathers delves into some incredibly dark territory, eating disorders, bullying, body shaming, suicide, and the strength of peer pressure are all covered with an uncomfortable level of satire. At times the subject matter is very close to the bone. The darkness of the comedy is unapologetic, and those unfamiliar with the story may find it difficult to stomach.

A fine production, with a huge cult following, Heathers is an unsettling, albeit, extreme journey into the intense bubble of high school. The comedy is dark, and the performances are big. The new cast elevates the show to new heights, making Heathers deserving of a second visit. The movie, fantastical at the time of inception now presses some highly relevant buttons but ultimately comes down to the story of a girl fighting her conflicted moral compass.