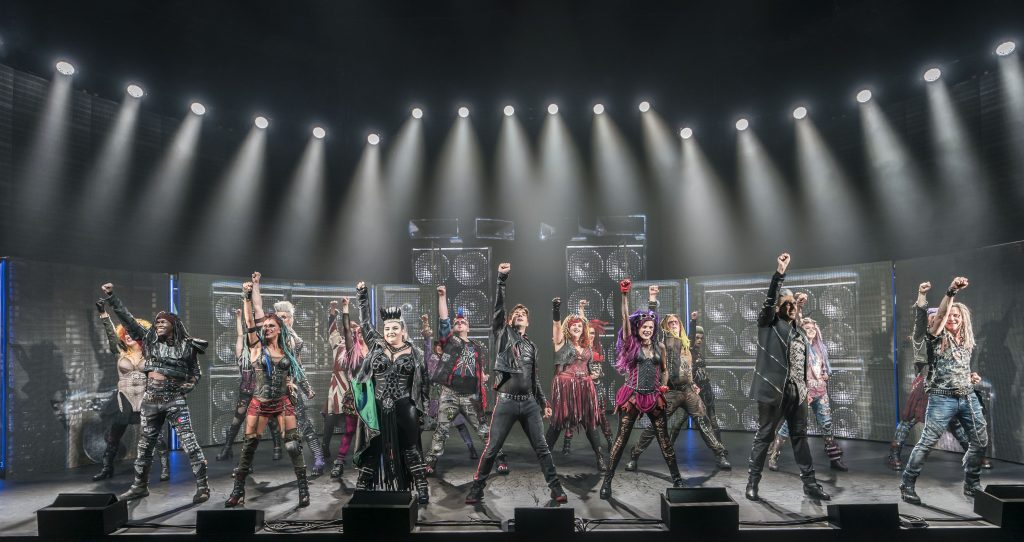 Cast of We Will Rock You UK Tour – Credit: Johan Persson

Back in 2002 even the perceptive Ben Elton surely couldn’t have foreseen just how technology would evolve by the time We Will Rock You would celebrate its 20th anniversary in 2022. Set in a dystopian future where free will has been quashed and everything is programmed, We Will Rock You is a jukebox musical featuring the songs of Queen as a gaggle of rebel Bohemians fight to bring back rock music and individuality.

Ben Elton’s book has thankfully been updated to reflect many of the significant cultural changes that have occurred since the show’s debut at the start of the millennium. Not least the advances in technology. It’s quite scary to think that Elton foresaw the power and influence that technology would have over society. Whilst the hold isn’t quite so extreme as depicted in the musical, phones are unquestionably glued to hands and information is less than a second away at the swish of a finger. This addiction to technology has undoubtedly had a detrimental impact on the creation of personal relationships, and people hide behind screens, creating any kind of persona that takes their fancy.

It’s always a tricky affair writing a solid book for a jukebox musical. Making the numbers of one group or artist fit into a narrative that isn’t based on their life story or rise to fame is no mean feat. In the main, the plot of We Will Rock You works. Earth has been renamed the iPlanet and the young black sheep of his class of clones Galileo, played by Ian McIntosh, is rebelling against conformity. He is haunted by his dreams and the strange words (lyrics) that manifest in his head. McIntosh’s performance of ‘I Want to Break Free’ goes some way to articulate his struggle. Galileo is joined by fellow outcast and rebel, the strong-minded, goth Scaramouche, played sublimely by Elena Skye. Her opening solo of the anthem ‘Somebody to Love’ is beautifully performed and demonstrates immediately that Skye can more than do justice to Queen’s iconic back catalogue.

Their fellow Bohemians are a joyous gaggle of misfits and rebels determined to bring back rock music. David Michael Johnson is enchanting as Brit and is complemented in spades by Kate Leiper as Meat. Their chemistry is particularly palpable, and their performance of ‘I Want It All’ is one of the standouts of the first act. Michael McKell is a dream as Cliff and provides some of the most laugh-out-loud moments of the night.

The iPlanet is controlled by the Globalsoft Corporation led by the villainous Killer Queen, played utterly divinely by vocal powerhouse Jenny O’Leary. On hearing of a prophecy that musical instruments have been hidden somewhere on the iPlanet she orders her lackey Khashoggi (Adam Strong) to round up the Bohemians and crush them. O’Leary and Strong play off each other with such a joyous blend of comedy and vocal ping pong. ‘Don’t Stop Me Now’ is a comedic number bookended by O’Leary’s quite frankly STUNNING vocals.

Unfortunately the ending is a tad disappointing, there is no epic showdown, and it does feel like somewhat of an anti-climax. That said, the closing performance of ‘We Will Rock You’ is truly rather epic, and the music 100% makes up for any weakness in the plot here.

For this 20th anniversary tour, Elton has returned to direct, and Jacob Fearey is behind the choreography and staging. The large video panels are effective but do look somewhat dated. The addition of ‘The Show Must Go On’ as the close to Act 1 is both poignant and cathartic, and a hugely positive tweak.

In fact, the only major gripe with the production is the sound. At times the music is so loud it drowns out the vocals. One imagines that it is challenging enough performing a back catalogue of songs originally performed by Freddie Mercury without being hindered by a self-indulgent sound technician. Aylesbury Waterside Theatre has great acoustics, and they are not afraid of some bass, but this was a definite weak link in an otherwise outstanding production.

There is a very good reason that We Will Rock You stands the test of time and will likely enjoy more revivals over the coming years. That is the epic and legendary music of Queen. It is ageless and inspiring, and the world was undoubtedly robbed too soon of incredible talent. This production has an incredibly talented cast who do the music justice and a wonderful band who do not put a foot wrong.

Pop your smartphone down for three hours and go and immerse yourself in some good old-fashioned live entertainment. You won’t regret it.

Runs Until: Saturday 7 May and on Tour