REVIEW : The Lion, the Witch and the Wardrobe – See the Lion and hear him roar 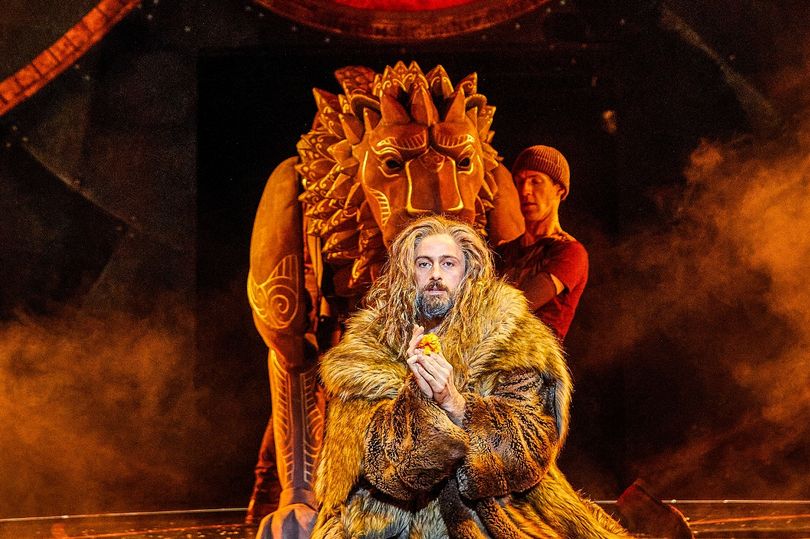 Many may know the story of The Lion, The Witch & The Wardrobe from the best-selling books by C.S Lewis, or by movie trilogy The Chronicles of Narnia. Watching the stage adaptation takes you back to the wonderful world of Narnia in such a mesmerising way, it was like watching the films for the first time all over again.

From beginning to end, the entire audience was transfixed. In fact, there was an audible ‘what?’ as the safety curtain came down, signifying the interval – they were not ready for part one to be over.

The stage itself looked very simple to start, with a clock face-like background and a piano in the centre, but it quickly became apparent this wasn’t the case. Rae Smith and Tom Paris worked together to create an insanely impressive, layered set design that makes ultimate use of all areas of the stage. This clever design also ensures it will fit any stage, which is very important as a touring show.

One striking piece of the set was a keyhole-like gap in the backdrop that revealed key characters at important points. From a mother waving her four young children away to Aslan’s foreboding presence over Narnia, this small stage is used to its full potential throughout the show.

However, I’m not sure how well some of the staging and the actors in the keyholes will have been able to be seen from the seats up in the gods, which lets it down a little.

As for the cast, every single cast member was perfect. Particular kudos must go to Samantha Womack, Christina Tedders, Chris Jared, Karise Yansen, and Shaka Kalokoh.

Karise Yansen and Shaka Kalokoh portray Lucy Pevensie and Edmund Pevensie respectively, and they do so flawlessly. These two create such a palpable tension onstage it is astounding. Kalokoh and Yansen bounce off of each other in such an impressive manner, giving the to and fro that you expect from strained sibling relationships, they could have been siblings offstage with how well they did.

Shaka Kalokoh plays the stubborn, hard-headed Edmund with insane accuracy. He makes you hate him in the beginning, thinking he’s a rude, stubborn, brute of a boy, yet throughout the performance, he warps and transforms into a brave young man, a truly impressive feat to accomplish believably in a two-and-a-half-hour stage show.

Karise Yansen as Lucy is one of the most genius casting decisions ever. With a petite frame, she looks like such a small, sweet little girl, yet she has the attitude and charisma to rival Aslan himself. The fact that this is Yansen’s professional debut is true insanity, expect to see her explode into the industry very soon.

Christina Tedders performs as Mrs. Beaver and perform she does. With unexpected comedic value, she brings such a warm light heartedness to the stage that is needed in a war-torn Narnia.

A surprise to no one is how fantastic Samantha Womack is as The White Witch. As soon as she steps on stage, she has this captivating aura that just pulls you in. She and her Gollum/Dobby hybrid companion are the stars of the entire show. To describe her companion in any other words than a mixture of Gollum and Dobby would be criminal. From the voice to the mannerisms, this actor is a class act in being both menacing yet oddly hilarious. Both he and Womack were teetering on the edge of being underused, they deserved more stage time.

And of course, you can’t spend a night in Narnia without mentioning the phenomenal Aslan, brought to life by Chris Jared. His stage presence is unmatched, with his low bellowing voice to commanding stance, he’s Aslan through and through, with a dishevelled appearance that rivals Sirius Black after he breaks out of Azkaban.

To mention the ‘human’ Aslan and not the puppeteers is a crime, the two men who bring the giant lion to life are Oliver Bingham and Shaun McCourt. The huge structure of Aslan is genuinely stunning, it is extremely detailed with gold accents to transform it from a ‘standard’ lion to the mythical creature Aslan is known as being.
The one thing that is slightly off is the lack of Aslan’s back legs. It is understandable this may be due to ease of transportation or movement on stage, but it did break the magic just a tad.

Throughout the entire performance, this whole company seemed limitless. For example, one moment Edmund (Shaka Kalokoh) was running around the stage, the next he was performing aerial trips and then playing a drum towards the end. Every single cast member either played an instrument, sang, or performed aerial tricks – or all three! This cast’s talent knows no bounds.

For anyone who is hesitant about seeing a full-blown musical or a play, this show has the perfect balance between the two. There is enough music to be catchy and hypnotic, yet there is enough dialogue to tell a coherent storyline. The music acts as more of a movie soundtrack than a performance.

It is the ideal introductory show to get someone into the theatre.

Runs until Saturday 12 March and on Tour

Please note this statement from The Alexandra Theatre:

“We have heard today that due to illness we will not have Samantha Womack in any performances at The Alexandra Theatre, Birmingham for the remainder of the week. The roles of The White Witch and Mrs. Macready will be played by Rachel Dawson, and the roles of Professor Kirk and Father Christmas will be played by Matthew James Hinchliffe.”