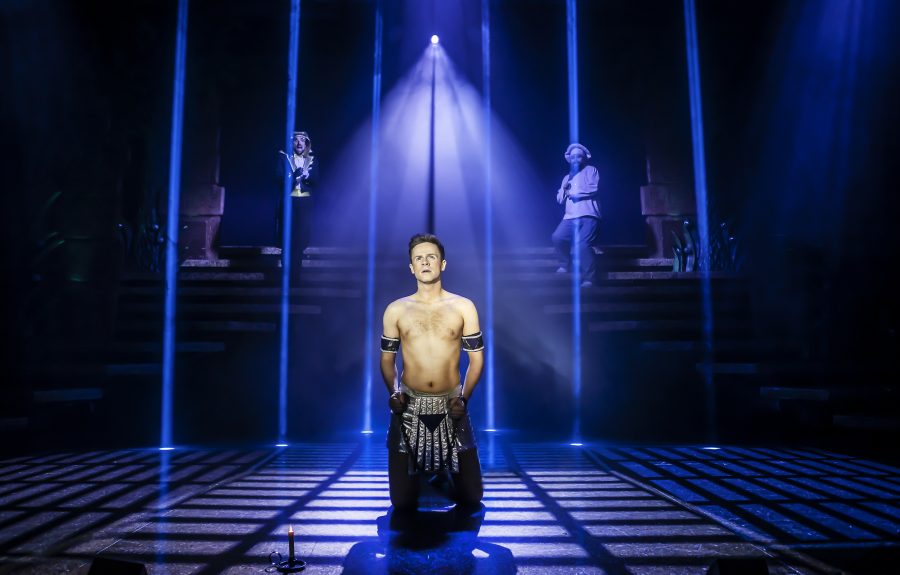 Joseph & The Amazing Technicolor Dreamcoat is a show that sits right in the heart of musical fans everywhere. The earworms come thick and fast, and it’s rare to find even the most casual theatergoers who haven’t caught this Andrew Lloyd Webber and Tim Rice collaboration on stage. Joseph’s dazzling coat of many colours has finally landed at Wolverhampton Grand Theatre.

The familiarity of the show is a struggle for a number of productions as each version must trump the last. It’s easy for directors to lose the vision of what most people want in a production of Joseph – a clear telling of the story with lots of energy.

Alexandra Doar’s professional debut is second to none as the Narrator. Vocally she is phenomenal and unlike narrators in previous incarnations of Joseph, Doar remembers who and where she is. Her entire purpose is to tell us Joseph’s story, not to flit around stage passing comment. And she smashes it.

Equally, the brothers take on a whole new role in this version of Joseph. They are very much at the forefront and not overshadowed by named cast members (often picked to sell seats rather than entertain). Their dance moves are slick thanks to Henry Metcalfe and Gary Lloyd’s stellar choreography makes the show, and it’s a dream to watch. It’s a real shame that so many of the well-loved dance breaks for the brothers are removed from the production.

Bill Kenwright’s objective is obvious, but the new take on an old classic doesn’t always hit the mark. While act one tells the story beautifully, it never gets going. Go, Go, Go Joseph is broken down and never hits the crescendo required before the curtain drop.

By the second act, the story is completely forgotten, and the run time is almost doubled by unnecessary extras such as singing Any Dream Will Do three times. Henry Lawes’ Pharaoh is entertaining, but a carbon copy of every other Pharaoh portrayal. The ‘Elvis’ Pharaoh is such a cliché that a fair few seasoned theatre-goers are completely over it. And despite the addition of King Of My Heart being a nice touch for Lawes, here the show loses all momentum.

Sadly, there are too many additional scenes, including King Of My Heart – in this particular iteration of Joseph which appears to be there for no purpose other than packing out the short run time. Even Mark McMullan’s rendition of Close Every Door, easily the highlight of the show, includes musical interludes which loses the audience’s full attention. Vocally he is far less poppy than previous names in the title role but instead has an operatic soul. His voice melts into the song, and each note packs a punch. It’s just unfortunate that he is regularly interrupted.

Joseph & The Amazing Technicolour Dreamcoat will always be a family favourite, but the push to upgrade the show doesn’t work. It’s too dark, and the extra songs drag rather than add to the essence of this upbeat show. This new production of a classic doesn’t take itself too seriously, but almost at a detriment to the journey, the story takes the audience on.