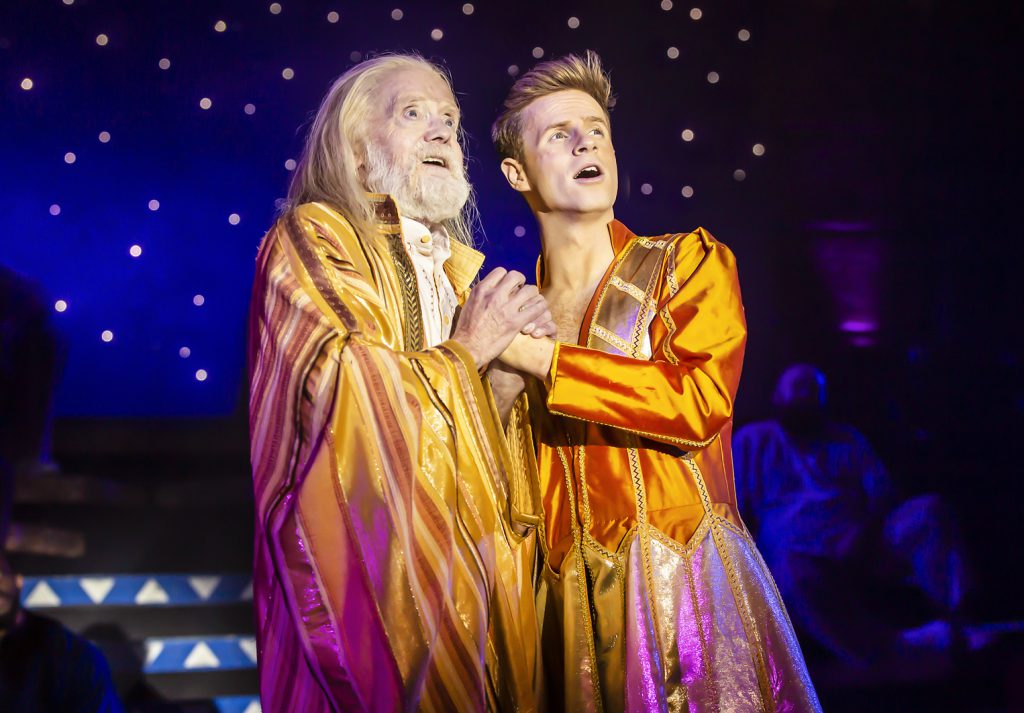 Since its West End premiere in 1973 Joseph and the Amazing Technicolor Dreamcoat has enjoyed unparalleled success. The show is currently in the throes of a resurgence with Bill Kenwright and Really Useful Group’s UK tour delighting audiences across the country. The tour enters 2020 with a refreshed cast led by 2019 Britain’s Got Talent Finalist Mark McMullan. McMullan is perhaps best remembered for his emotional performance of Les Misérables‘ Bring Him Home which earned him a place in the final.

Joseph, a sung-through musical with music and lyrics by creative legends Andrew Lloyd Webber and Tim Rice, is based on the ‘coat of many colours’ story from the Bible’s book of Genesis. Arrogant in the knowledge he is the favourite of his father’s 12 sons, Joseph’s brothers’ jealousy is amplified when Jacob presents his son with the Technicolor Dreamcoat. Livid at the blatant favouritism, the brothers conspire to kill Joseph, before deciding to cash in, selling him into slavery. Eventually, Joseph finds himself in Egypt and right-hand man to the Pharaoh.

Joseph is a classic, family-friendly musical; its familiarity is like an old friend and is partly why the show continues to endure. However, despite Gary Lloyd’s revamped choreography, this production is a carbon copy of those that came before it, which certainly earlier in the tour was largely to its detriment. However, the turn of the refreshed cast has served to elevate the energy and sparkle of the production to new levels.

The original gripes remain and the main issue with this production is the number of fillers used as a ruse to pad out the running time of the show. We begin with a long instrumental overture, which drags despite showcasing the talent of the accomplished orchestra led by Mike Steel. The second act opens with a similar theme with the show then concluding with the Joseph Megamix Reprises. That said, with the energy in the room both on stage and in the auditorium the pounding Megamix truly raises the roof. With the format and formula of Joseph tried, tested and loved by so many it is hard to be critical, yet the instrumental fillers do begin to feel somewhat lengthy and a touch unnecessary.

Mark McMullan was born for the role of Joseph, picking up the mantle from Union J’s Jaymi Hensley, he oozes class and charm from the moment he steps into the iconic coat. He is a wonderfully authoritative yet endearing Joseph, his vocals are like caramel and at times are operatic with his solo of Close Every Door spine-tingly beautiful. Who needs chocolate when you can listen to McMullan’s vocals, he truly is inspired casting. He is complemented in droves by Alexandra Doar as the Narrator who herself has an incredibly rich voice. The Narrator is a challenging role, but Doar confidently and successfully manages to hang the narrative together whilst delivering her numbers with poise and assurance.

Joseph veteran Henry Metcalfe continues in the dual role of Jacob / Potiphar and shines in both. It’s easy to see that this role is a complete joy for him, and this translates to his performance. The collective of brothers is undeniably strong with Bradley Judge particularly standing out as Dan. It’s the numbers where the brothers feature that the slick new choreography comes into its own.

Alfie Parker and Robert Bardsley provide solid turns in their roles of the Baker and the Butler, Parker, in particular, a delight showcasing a hilarious northern accent as he recounts his dream. Henry Lawes elicits some of the biggest cheers of the night thanks to his lively portrayal of the animated Pharaoh struggling to make sense of his confusing dreams. Channeling his inner Elvis, Lawes delivers the Pharaoh’s signature number Song of the King with infectious enthusiasm, incredible energy, and enviable vocals.

Although a familiar format, this production of Joseph, thanks in large to the talented and energetic new cast, still packs a punch with its iconic score and the beautifully bright stage design by Sean Cavanagh, complemented by clever lighting from Nick Richings. The large and expansive stage of the Waterside really suits the production to a tee and what the show lacks in substance it makes up for in fun, frolics, and exuberance. It is also a tremendous opportunity to introduce younger audiences to the theatre.