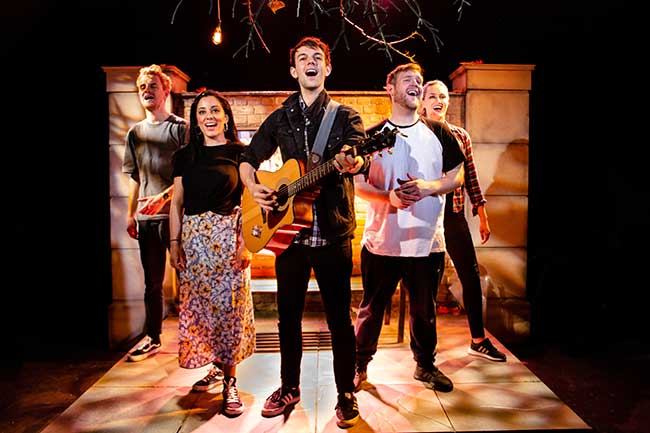 The cast of Fiver – Photo Credit: Danny with a camera

The importance of supporting new British musicals cannot be underestimated; there are precious few of them around. However, in ‘The Little’ of the Southwark Playhouse an astonishingly original and fresh new musical is making its debut. Cleverly innovative with an incredibly catchy score thanks to the vision of writers Alex James Ellison and Tom Lees.

Have you ever looked at the cash in your wallet and wondered where it has been before it came into your possession? Fiver follows the journey of a humble five-pound note as it changes hands and tells the story of the people it comes into contact with. Omnipresent, the fiver bears witness to moments of significance in people’s lives, whether it be the birth of a child, the end of a relationship, a proposal or simply given as part of an act of kindness.

Not only is Fiver refreshingly original, but it also boasts an insanely talented cast of musical theatre professionals. There is absolutely no weak link in this cast and it is a joy to witness such raw talent in such an intimate setting. Alex James Ellison plays a busker, come narrator who cleverly hangs the narrative together as the stories intertwine at pace. He flits in and out of the action, guitar in hand, clearly, an accomplished musician he is also blessed with a beautiful voice. The remaining four cast members Luke Bayer, Dan Buckley, Aofie Clesham and Hiba Elchikhe play multiple characters, some more significant than others.

Dan Buckley, most recently seen in the cult favourite Eugenius! demonstrates exactly why he is becoming known as a comedy genius through his YouTube channel with Scott Paige. His performances are hilarious and his voice soulful, yet he can deliver poignancy and emotion when needed. Hiba Elchikhe balances vulnerability and incredible assurance through her multiple characters, bringing light and shade to each with incredible ease and authority and wonderful vocal placement during her numbers.

Aofie Clesham is nothing short of a revelation. Her comedic timing is a dream, she flits between various accents and her facial expressions are an utter scream. Vocally she is incredibly accomplished and her performance of the penultimate number Press Hash To Rerecord is a particular highlight.

Everybody’s Talking About Jamie alum Luke Bayer, showcases his enviable versatility, with his characters ranging from bereaved friend to broken-hearted single father, to unpleasant schoolboy bully. His vocals as ever are powerful, smooth and suit the numbers implicitly. Bayer’s chemistry with Clesham, in particular is evident as they bounce off each other with incredible ease, never more so during a particularly hilarious scene with a shopping trolley.

Bayer and Buckley also share a beautiful duet of You’ll Be a Man, My Son, providing a brief interlude from the comedy, allowing the actors to showcase their emotional range and striking a real chord with the audience – a few tears were even shed.

The show explores several styles of music from hip hop to rock to power ballads which complements the different moods of the narrative and is book-ended by the incredibly catchy earworm Change is Bringing Me Down. The only slight negative is the sound design. The band, whilst incredibly accomplished, tends to drown out the vocals at key moments making it difficult to distinguish the lyrics.

The set is cleverly designed by Justin Williams and suits the space but it is also easy to envisage this show being scaled up to suit a larger venue where it could certainly hold its own. Quality original British musicals come along so infrequently this show deserves to enjoy a longer life and to reach a larger audience. Southwark Playhouse is committed to supporting and facilitating original work and Fiver is a fine example of the quality that this commitment can yield.  The show is only in residence for another week and will disappear as quickly as the five-pound note in your pocket. It’s also whipping up quite the buzz so don’t miss out – it’s worth every penny.