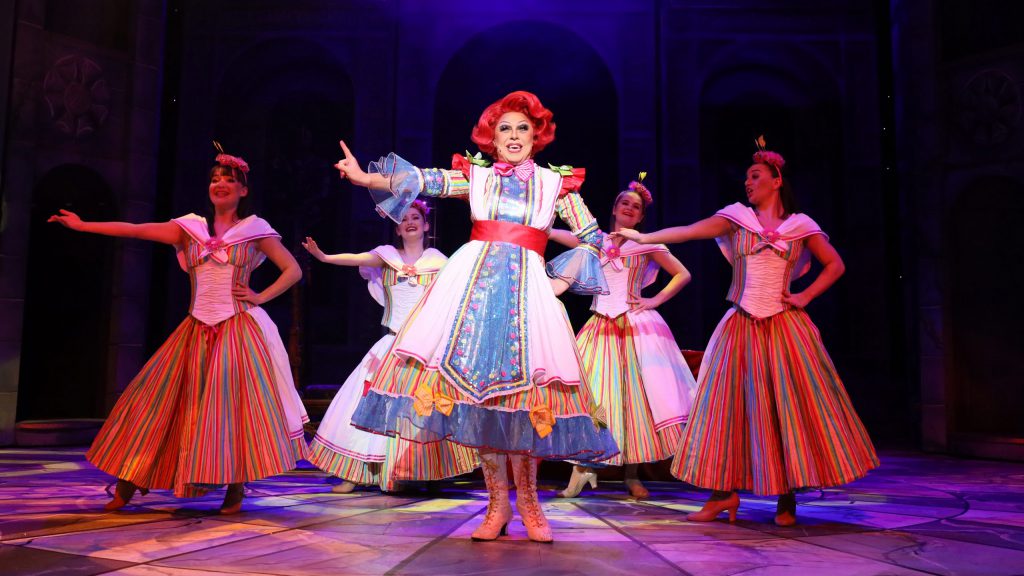 When we think of panto, we think of fabulous costumes, hilarious mishaps and a Kenneth Williams-worthy amount of double entendres. We think of bright lights, cheesy dance moves and toe-curling moments of audience participation. The great British public is ever-so fond of their beloved Christmas pantomimes and this one certainly doesn’t disappoint.

Written in 1740, the story of Beauty & The Beast is a classic of love, judgment, and moral teachings. A bookworm who makes a huge sacrifice for the sake of her family, battling imprisonment and an angry ‘monster’ makes for a story of emotionally charged highs and lows, perfectly fit for a pantomime adaptation.

As the curtains go up at the wonderful venue that is Aylesbury Waterside Theatre, a rendition of Footloose is quickly afoot. Perhaps not off to the best start with, arguably, a contextually strange choice of opener and some concerning vocals and predictable choreography, the rocky start is a bit of a shock to the system.

Thankfully, the initial concerns are quickly dispelled by the sensational La Voix. The internationally renowned and critically acclaimed diva who dazzled and won the hearts of the nation on Britain’s Got Talent in 2014, effortlessly wins over the audience with her fabulous stage presence, charisma, and performing talents. Her comedic timing is a natural gift and she shines throughout.

Act 1 certainly gets us into the panto mood with some comedy corkers. Aside from the opener, the songs are well-chosen, and the choreography is beautifully performed by talented dancers, with a particular nod to American Musical Theatre Academy graduate, Flavio Marullo. Aside from the shock of a distasteful, animal-related joke, backed up by visuals that are on the wrong side of comfortable for a family-friendly show, it doesn’t disappoint in entertaining.

Act 2 is the stronger of the acts. A special guest appearance, fantastic duets and a hilarious slapstick version of the 12 Days of Christmas takes the production to new heights.

Andy Collins, a popular and likable radio presenter, makes for a fantastic ‘partner in crime’ to La Voix. With his cockney charm and friendly, kind way with the audience, he understands the traditional panto cast-audience relationship like a true, seasoned professional. He effortlessly works his way through some sound engineering and stage mishaps, seamlessly dealing with the situation through great comedic entertainment. His rapport with La Voix certainly doesn’t go unnoticed and, between them, they totally own the performance.

Eastenders actor Danny Walters plays the part of Beast, his duets with Amelia Adams-Pearce’s Belle are strong, with the Beast’s highlight being a fantastically arranged Adele and Lewis Capaldi remix. Walters’ vocals go from strength to strength throughout and his acting is skilled and emotive. The fact that he sounds like a somewhat pained Sean Connery is a little distracting (in an inadvertently hilarious way) but only adds to the brilliance.

Another fantastic asset to this production is Michael Quinn, who plays Hugo Pompidou, the arrogant, egocentric muscle man, whose sights are set on Belle. His horrendous (intentionally, one hopes!) French accent only adds to the hilarity of his scenes.

It would be remiss not to mention the strengths of the wardrobe and scenic departments. The multi-faceted sets and smoothness at which these are changed are nothing short of flawless and the costumes, particularly La Voix’s, are stunningly glitter-filled and spectacular and certainly fit for the fabulousness of a panto dame.

Considering this production was rehearsed for only ten days, the quality of the outcome is a testament to a strong cast, with excellent, skilled direction from Guildford School of Acting graduate, Chris Nelson.

Aylesbury Waterside Theatre’s Beauty & The Beast is certainly worth a visit – this panto is a must-see, festive triumph, enjoyable for all.