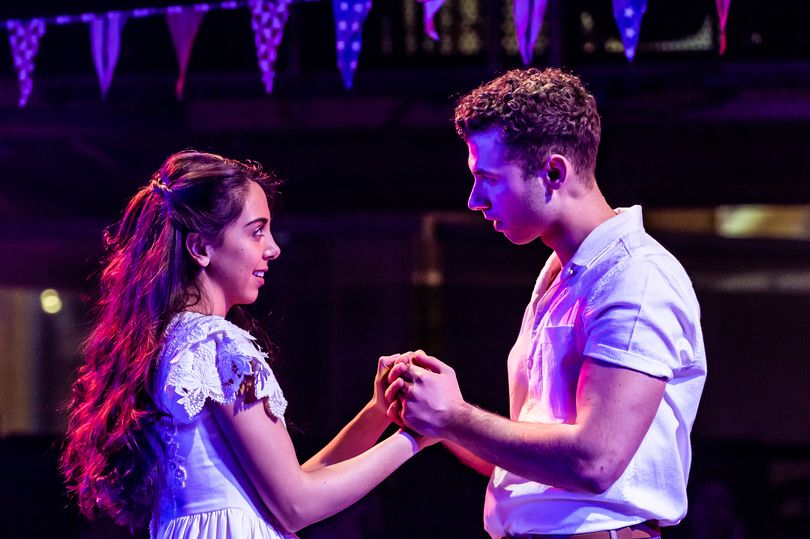 West Side Story at the Royal Exchange Theatre (Image: Richard Davenport: The Other Richard)

For 60 years the format, structure and style of West Side Story have remained constant. Historically, for anyone wishing to produce West Side Story the rights restricted the production to the original choreography. For the first time, those rights have been relaxed and the shackles are off for the Royal Exchange’s outgoing Artistic Director Sarah Frankcom who has re-imagined the show for a modern audience.

Created by Leonard Bernstein, Jerome Robbins and Stephen Sondheim, West Side Story is based on Shakespeare’s most famous tragedy Romeo and Juliet. The musical is set against the backdrop of 1950’s New York of gang violence and charts the tensions between rival gangs the Jets and Puerto Rican Sharks who regularly clash at will. Things become complicated when a founding member of the Jets, Tony, falls in love with Maria, the sister of Sharks leader, Bernado.

West Side Story’s songbook which includes, Maria, America, Somewhere and Tonight combined with stunning choreography has cemented its place as one of the most iconic musicals in history.  A passionate and romantic love story set against the backdrop of arbitrary violence and gang warfare.

This is a superbly dynamic production which looks like it has always belonged on the circular and round space of the Royal Exchange Theatre. The re-imagining of the space affords an incredibly immersive experience for the audience where the intensity, emotion and passion of the cast are palpable. There is nowhere to hide in this incredibly intimate space. Facial expressions and movements are amplified and you feel the breeze of the actors as they run past you. The talented orchestra, led by Musical Director Mark Aspinall is situated in booths around the outer circumference of the theatre with the music piped in through speakers.

Changing a tried and tested formula of a much loved, iconic musical is always going to be a risk but thankfully Frankcom’s changes have paid off in abundance. With demand for tickets such that the run is completely sold out and the theatre announcing a second run in 2020 it’s safe to say this production has been a runaway success.

With the requisite freedom, Frankcom has made some positive tweaks to bring the piece into the present. The Jets, traditionally a gang of Caucasians, have widened their demographic with black and Asian members now forming part of the group. This is a bold move, as West Side Story labours very much on the whites versus Puerto Rican’s – but in making these tweaks Frankcom successfully makes the production about much more than race.

The new choreography created by Aletta Collins has been somewhat pedestrianised and actor led rather than the more ensemble led choreography we are traditionally used to. It scarcely matters though as for a space such as the Exchange, the original choreography just wouldn’t work. The only gripe is the clear imbalance of the Jets versus the Sharks with the former far outnumbering the latter. Jordan Cunningham and Pol Galcera do a fine job as Sharks Pepe and Indigo but the imbalance is noticeable.

The success of any production of West Side Story is dependent on the strength of its leads and it’s safe to say that Andy Coxon (Tony) and Gabriela Garcia (Maria) more than rise to the occasion. Their performances of the star-crossed lovers are emotionally charged and electric. Coxon brings a vulnerability to the conflicted Tony which is palpable; his incredibly rich voice is never more powerful than during his solo of the iconic Maria. Garcia delivers Maria’s character development with a believable authenticity taking the audience through her initial innocence, through falling fast and hard for Tony and her final and heart-wrenching loss. Garcia too is incredibly vocally strong with a pitch perfect and at times operatic range that brings perfect vocal placement to another level.

The leads are complimented in droves by the wider cast. Jocasta Almgill, in particular, stands out as Anita, who suffers a significant loss of her own. Fernando Mariano and Michael Duke bring edginess and aggression to gang leaders Bernardo and Riff making the tensions feel genuine and authentic.

This re-imaging of West Side Story is a fine example of live theatre which boasts a hugely talented cast, innovative, minimalist stage design, stunning choreography and familiar, unforgettable numbers. It’s fast-paced, emotional and immersive having been adapted masterfully for the Royal Exchange, it’s also scarily relevant. For anyone who missed it this time around – beg, borrow or steal a ticket for the 2020 run – you won’t regret it.