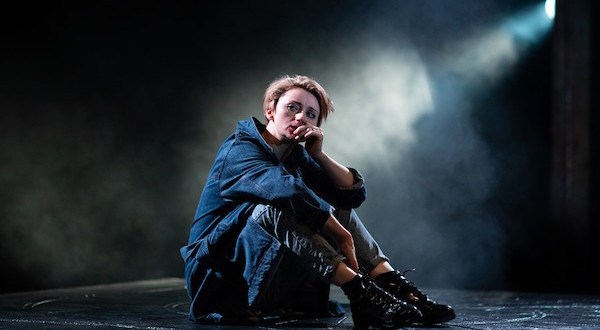 Political unrest, anarchy, rebellion and corruption meet futuristic ‘80’s cyberpunk in this dystopian re-imagining of Thomas Otway’s restoration thriller. First staged in 1682, this tragedy of disillusionment, unfulfilled expectations and distrust of the establishment yields eerie parallels with today’s political climate and the appetite for a change to the status quo.

Set against the backdrop of a moody, dark and sinister Venice, the play revolves around Jaffier, a nobleman who, after saving her from drowning, marries the daughter of powerful Venetian senator Priuli without his blessing. For a time Jaffier and Belvidera live in marital bliss but when Priuli discovers their betrayal he exercises his revenge by having their property seized leaving them destitute. Meanwhile, Jaffier’s close friend and confidante, Pierre, a soldier, has been plotting with a group of mercenary rebels to take down the Senate. Driven by his hatred for corrupt senator Antonio he preys on Jaffier’s vulnerabilities enlisting him in the plot. Conflicted at every turn, Jaffier must weigh up what is more important to him, loyalty to his wife or his oath to his friend, with both options potentially costing him dear.

The light and shade in Venice Preserved are astonishing, Director Prasanna Puwanarajah has drawn inspiration from various media including anime, 80’s sci-fi movies and dark comic book heroes. The minimalist staging is complemented in spades by Jack Knowles’ clever lighting design which plunges the audience into moments of sensory deprivation while the clever use of video and lasers, designed by Nina Dunn, add to the futuristic style. Puwanarajah describes the piece as ‘Restoration Noir’; gone are the picture-perfect images of Venice to be replaced by an underground of discontent. Venice’s geography and close proximity to water are used regularly as a motif within the piece, sinking in its own corruption; the imagery is weaved throughout as the tides of loyalties turn at will as the play progresses.

Venice Preserved is largely centred on the married couple Jaffier (Michael Grady-Hall) and Belvidera (Jodie McNee). Grady-Hall provides a strong turn as the conflicted anti-hero Jaffier; he spends much of the play lamenting his divided loyalties, and his lowest ebb comes when offering Belvidera as collateral to the group of mercenaries putting her in significant and unnecessary danger: so much for the great and passionate love he had been harping on about for much of the first act. Inherently unlikable and largely unredeemable, Grady-Hall cleverly brings a pathetic edge to Jaffier making it just that bit too hard to empathise with him.

McNee is a revelation as Belvidera.  Through her journey, she wonderfully translates Otway’s commitment to giving his female protagonists a voice. McNee’s performance is riveting and emotional and despite her best efforts, Belvidera can only sit back and watch her husband as he makes and remakes the wrong choices.

Les Dennis is assured in his debut season at the RSC. He plays Belvidera’s father Priuli and offers a resigned and embittered take on the wronged senator. Stephen Fewell also makes his RSC debut as the idealistic soldier Pierre, which is astonishing given that he looks so at home on the RSC stage and gives a standout performance.

Resolute and unwavering in his beliefs, Fewell’s stage presence is incomparable and he is mesmerising to watch.

Venice Preserved is an undeniably strong ensemble piece with each actor incredibly strong in their role but it is John Hodgkinson who steals the show as the corrupt Senator Antonio with a penchant for S&M and who quite unexpectedly but hilariously breaks the fourth wall. Hodgkinson offers some much needed and massively surprising light relief in the darkness bringing us back to the incredible contrast of light and shade within the play. He plays off Natalie Dew’s dominatrix Aquilina with absolute aplomb with both actors holding absolutely nothing back during their shared scenes. Dew herself brings a masterful and assured strength to Aquilina who takes absolutely no prisoners in her clear disdain for the seedy Antonio.

Venice Preserved is not a comfortable play; it’s tragic, dark and quite frankly a disaster for pretty much all the characters. It’s also a touch on the long side with the first act significantly stronger than the second. The flow and momentum never quite seem to hit their stride. That said, for a play that was written over 300 years ago it couldn’t be more relevant and offers a stark reminder that throughout history the proletariat will only allow themselves to be pushed so far before action is taken.

The RSC and Prasanna Puwanarajah have created a solid re-imagining of Otway’s bleak tragedy, the depressing and gloomy plot that ultimately centres around compromising your political or personal (or in this case both) loyalties is elevated by the incredibly talented cast who bring undeniable depth to Otway’s words.