REVIEW: The Entertainer – Shane Richie shines in a play of two halves 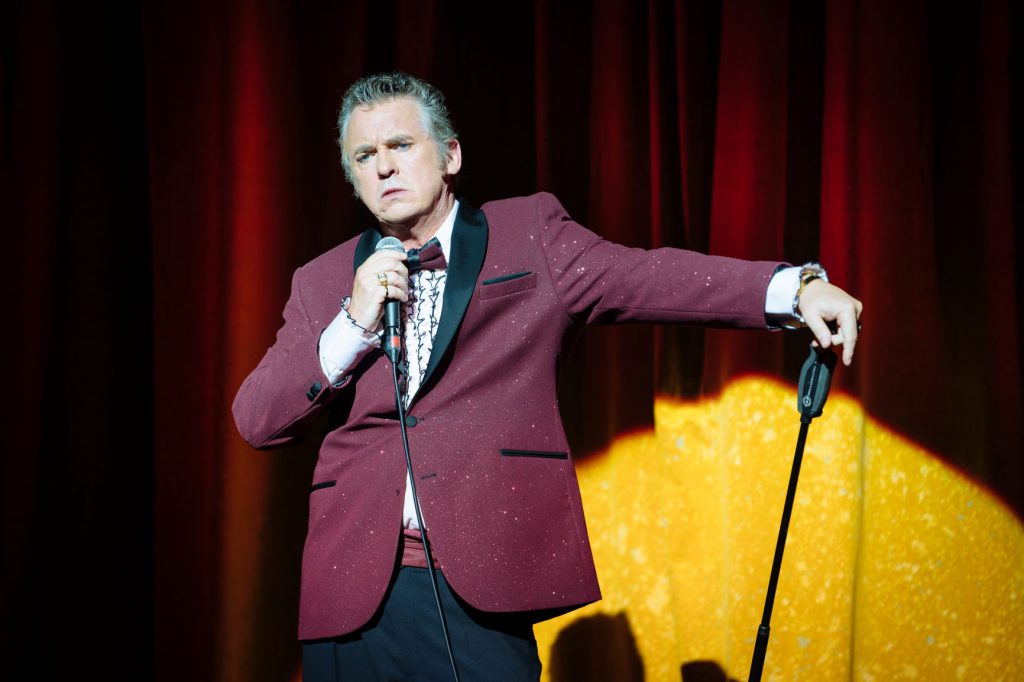 Written and set in 1956 by John Osborne, the original iteration of The Entertainer takes place in Britain during the Suez Crisis. It depicts Archie Rice (Shane Richie), a failing music-hall performer, his family – father Billy (Pip Donaghy), second wife Phoebe (Sara Crowe), daughter from his first marriage Jean (Diana Vickers) and son Frank (Christopher Bonwell), and their lives during Suez – which is particularly pertinent to them as Archie and Phoebe’s other son Mick, is fighting overseas in the Army.

Director Sean O’Connor’s 2019 version has been updated (so-to-speak) and is now set during the Falklands War, a rather similar, albeit more recent, politically driven conflict. It also modernises Archie’s role to make him more of a recognisable 80’s style comic performer, failing to follow in the footsteps of his now-retired dad Billy, who seemingly enjoyed much success as one of the older variety music-hall hosts. The story shows the struggles the family face financially due to Archie’s overwhelming lack of triumph, despite his supposed best efforts, and sees them engaging in frequent arguments and even more regular drinking to excess – something that often heightens their willingness to expose their disdain for and inability (or lack of willing) to support and agree with one another.

The first act is used primarily to build foundations and explain what each of the characters is going through, and it certainly doesn’t rush to do this. The conversations and activities depicted, while accurate and familiar, do little to enthral the audience and even less to prevent the mind from wandering. There are moments that bring titters and some important story points, but the majority seems just to be excessive scene setting, which sadly may explain why the almost full audience at curtain up, had a few more gaps once seats were re-filled after the interval.

The second act however is a stark contrast, as the pace is upped considerably and content is a lot more interesting, which redeems the show a fair amount. There are some shocks, some revelations and an increased opportunity for the characters to show substance and depth and it is a largely more enjoyable watching experience.

The lead role of Archie Rice has been taken on by some of the biggest names in stage and screen history, including: Kenneth Branagh (stage), Bill Nighy (radio), Robert Lindsay (stage), Michael Gambon (film) and of course Laurence Olivier – the originator of the part and for whom it was written; and it is safe to say Richie deserves his place among these revered names.

With his ability to have the audience eating out of his hand in moments, and his casual but perfectly timed delivery, he embraces the dried-up comic image and leaves no doubt in the mind that that is who you are watching. The sections of the show that are set with him on stage performing work brilliantly. This allows the audience to become that of his working venue, while the scenes back in his family home show him in a different light but still more often than not, hiding behind his happy go-lucky facade.

Richie excels at all levels and moods of the character and truly deserves what is a majority standing ovation as he takes his individual curtain call between full cast bows.

The cast all play their roles well, however none of the characters are particularly likeable, with the obvious exception of Archie, who is quite often reminiscent (as mentioned in the programme) of the Del-Boy style down on his luck yet battling head of the family, and as such seems forgivable of some of his foibles. He alone the audience warms towards, where the others with their blunt comments, outspoken opinions and often racist or sexist views, tend to be jarring rather than drawing empathy. There are moments where you feel for the characters, and the emotional scenes with big revelations and affecting plot points do encourage sympathy and admiration, but the majority is not positive.

In conclusion the piece is difficult to watch at times, a combination of uncomfortable familiarity, very slow initial pace and perhaps even the political feelings that may be a little too relevant with recent events. That said Richie’s performance is excellent and enduring the slow first half of the show is rewarded by the much improved second act.

An interesting and hard-hitting revival of a play that has always divided critics, and as such, is not for everyone.