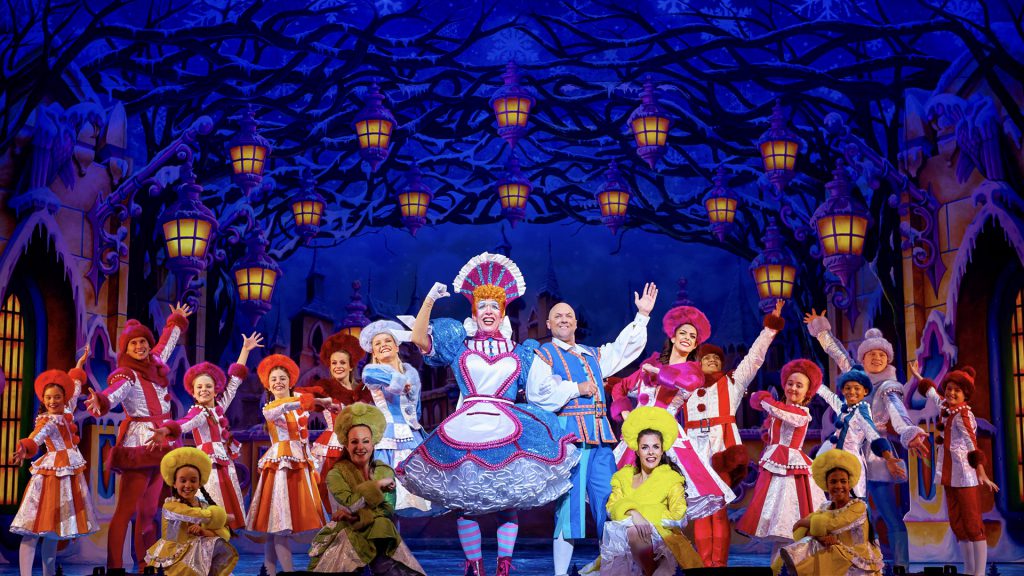 The cast of Snow White and the Seven Dwarfs at Birmingham Hippodrome – Photo credit: Paul Coltas

Most of us may be in the post-Christmas slump but that hasn’t stopped Birmingham Hippodrome’s panto extravaganza from banishing those January blues with their utterly ‘flawless’ production of Snow White and The Seven Dwarfs. With costumes and special effects direct from 2018’s sold-out production at the London Palladium, it’s easy to see why this is one of Qdos Entertainment’s flagship shows.

Vibrant vivacious and slicker than Matt Slack’s head, Snow White is a gift from the panto gods. The production smacks of quality in all areas. It also boasts an incredibly strong cast. Former Coronation Street actress Faye Brookes steps into the titular role and is an endearing Snow White. Brookes is also blessed with an incredible voice with more hardcore theatre-goers perhaps recognising her from her performances in Shrek the Musical and Elle Woods in the 2012 tour of Legally Blonde.

Brooks is matched vocally by her Prince Harry (never more topical than at the time of writing) a charming and spirited Jac Yarrow, fresh from his breakout role last summer as Joseph in the West End. Yarrow is a wonderfully dynamic performer and will be a nailed-on leading man for years to come.

As with all pantomimes, the joy is in the comedy and Snow White brings it in spades. Local legend and all-round lazy cow Doreen Tipton has made the journey from the Black Country to Brum bringing her trademark deadpan humour along with her. She takes on the role of The Lady in Waiting and is complemented beautifully by resident Dame Andrew Ryan as Nanny Annie Aspirin whose costumes are simply out of this world.

However, the night and the production belong to Hippodrome favourite Matt Slack. Performing in his seventh successive pantomime at the venue, somehow his performances get funnier and slicker. Slack has also co-written the production showcasing further, that there are no ends to his talents. He is on golden form as he ruthlessly torments his fellow cast members much to the delight of the excitable audience who lap up his interactions. The production’s (not so scary villain) is television and theatre stalwart Lesley Joseph who is a joy as the jealous and vindictive Queen Dragonella. Joseph is joined by Joe McElderry as the Spirit of the Mirror and once he hits the stage wastes no times in showcasing the vocals that made him a star.

Britain’s Got Talent’s dance troupe Flawless get involved as the Queen’s Guards showcasing the incredible moves that have cemented their place as one of Britain’s most popular dance acts. The wider ensemble and children in the cast are also strong, all contributing to an incredibly tight and professional piece of theatre.

The cast are clearly having a ball and this infectious joy and energy are palpable in the auditorium. Through Michael Harrison’s expert direction (he also produces) and some slick and complex choreography by Alan Harding, Snow White is at times more like watching a musical variety extravaganza than a pantomime.

All of the component parts of this production are seamless and there is absolutely no weak link in this wonderful production. The script is sharp with the cast delivering pantomime mastery. Although Qdos have clearly taken liberties with the plot of the famous fairy-tale, the tweaks bring a new dimension to the story meaning it’s never possible to quite anticipate where it’s going next.

The pantomime formula is tried and tested but somehow Birmingham Hippodrome continues to raise the bar. The jokes and the format may be familiar, but this production makes them feel fresh, new and hilariously funny. Ian Westbrook’s set design is stunningly effective and the vibrancy of the staging against the beautiful costumes is quite astounding.

If you are in a January funk look no further than Snow White to vanquish those post-Christmas blues. You’ve got until 2 Feb to witness genuine panto perfection. A must-see pantomime masterclass.