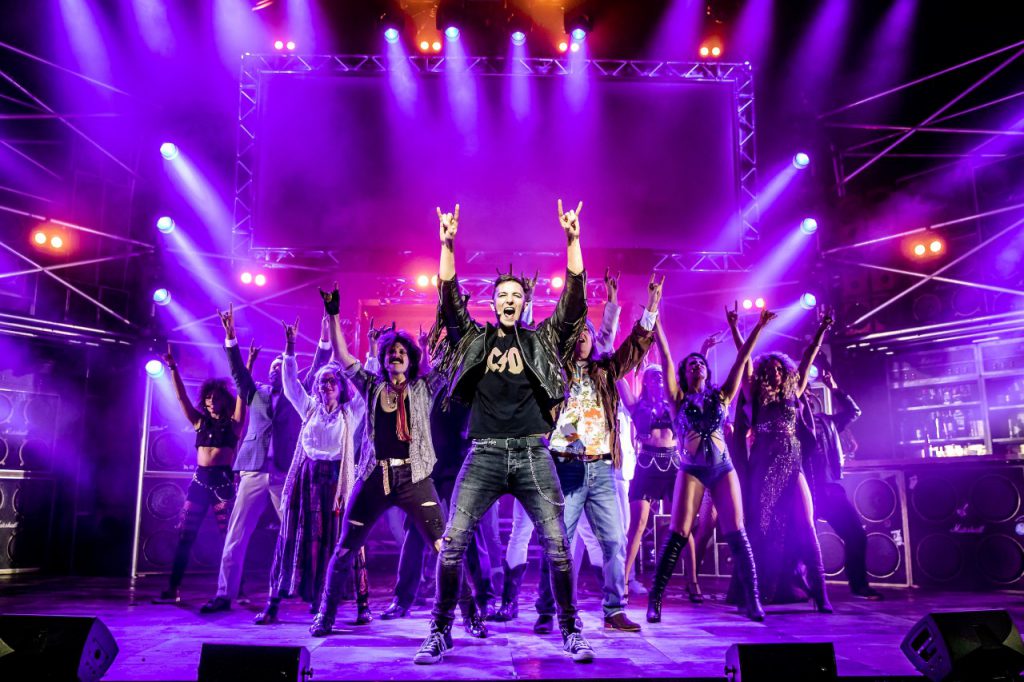 Leave your inhibitions at the door and plant your tongue firmly in your cheek because theatre land’s most salacious jukebox musical is rocking up a storm at Wolverhampton Grand this week. With big hair, big performances and even bigger tunes Rock of Ages is a raucous night of 80’s nostalgia book-ended by a hilarious script and incredible vocals.

Set against a backdrop of glam rock classics from legends including Bon Jovi, Whitesnake, Europe and Journey, Rock of Ages is a story of big dreams and broken hearts. Soon after hopping off a bus from the Midwest, aspiring actress Sherrie (Jodie Steele) finds herself on the notorious LA Sunset Strip. Here she meets Drew (Luke Walsh), a barman at legendary club, The Bourbon Room. With love blossoming, a spanner is thrown in the works in the form of outrageous rock god Stacee Jaxx (Antony Costa). In the meantime, the future of The Bourbon Room is thrown into to doubt thanks to a couple of German real estate developers who have their sights firmly set on demolishing the strip.

With several incarnations behind it including a 2012 motion picture, this production of Rock of Ages kicked off last year and through the direction and choreography of Nick Winston, is perhaps the grittiest version to date.

Chris D’Arienzo’s book is pretty rudimentary, but that scarcely matters here thanks to the commitment of the cast. Rock of Ages is a high octane production where big and consistent performances are needed night after night, the level of energy required to sustain such a tempo cannot be underestimated and the cast meet that challenge with style.

Luke Walsh is the quintessential leading man, his vocals are staggering and he brings an endearing boyish charm to the lovelorn Drew who in inadvertently ‘friend zoning’ Sherrie pushes her in to the arms of lothario Stacee Jaxx. Driven by rejection he sacrifices his dreams to achieve stardom, turning his back on his rock roots.

Jodie Steele does wonderful work with Sherrie’s arc and character development. She takes us authentically through Sherrie’s initial wide-eyed innocence to her grubby encounter with Stacee Jaxx and her subsequent decent into the world of the Venus strip club, where she too abandons her dreams. Steele and Walsh’s chemistry is believable and their vocals complement each other beautifully, particularly during the rock ballads Waiting for a Girl Like You and High Enough.

Antony Costa, playing his final week in the show puts in an energetic performance as the abominable and vulgar rocker. His duet of the classic Foreigner power ballad I Want to Know What Love Is with Steele is a particular highlight. Despite unsavoury nature of the scene that accompanies it, Costa and Steele’s delivery and comic timing make this number one of the standouts of the show thanks to the uncomfortable level of juxtaposition.

Rock of Ages is a true ensemble piece with no weak links and there is some incredible talent on show. Zoe Birkett’s take on Venus Club owner Justice allows her to flex her vocal might, and flex she does. Her larger than life portrayal of Justice adds to the strength of the musical numbers and it is a shame she is not utilised more readily.

However, the stage and the night belongs to Lucas Rush as the impish and mischievous ‘nar-rat-tor’ Lonny. What differentiates Rock of Ages from most musicals is its constant breaking of the fourth wall through Lonny’s character and narratoring (as he puts it). From the first scene Rush has the audience in the palm of his hand as he addresses, teases and pokes fun. His comic timing is off the charts and he is laugh out loud hilarious. His energy never wanes and he bounces off all the characters with an infectious charm. It is clear he relishes the role of Lonny and the show is all the richer for him.

Kevin Kennedy brings wonderful warmth to the character of Bourbon Room owner Dennis Dupree. Kennedy and Rush play off each other delightfully and their duet of I Can’t Fight This Feeling is both riotous and incredibly sweet.  The band, led by Musical Director Liam Holmes is on the stage which adds to the authenticity of the piece, immersing the audience into the strip and The Bourbon Room/Venus Club.

Rock of Ages is heavy on stereotypes, never more so than when German’s Hertz (Vas Constanti) and Franz (Andrew Carthy) are on stage. The goose-stepping and over the top accents are somewhat excessive but thanks to Carthy’s performance in particular, they can just about be over-looked. The show also taps into more serious themes such as female exploitation, sex and drugs which are delivered with an inappropriate level of humour and if you are easily offended then this is not the show for you.

That said Rock of Ages is unapologetic, lascivious and the ultimate in theatrical escapism. As it continues to rock its way across the UK, it will no doubt bring delight to swathes of audiences if the reaction of the Grand Theatre is anything to go by.