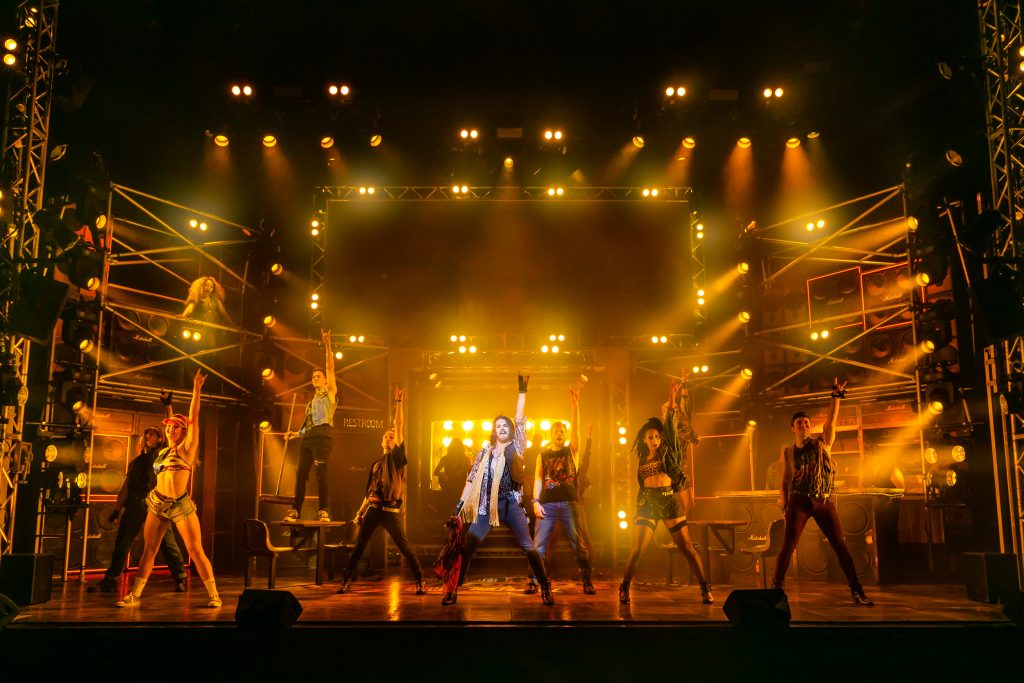 Who can forget the big hair and the even bigger power ballads of the 1980s?  Songs with stonking guitar riffs and hefty dollops of emotional angst delivered by leather-clad bands such as Whitesnake, Poison and Europe.  Glam rock was completely over-the-top and at times absurd.  How could a musical possibly deliver that?  Well, Rock of Ages certainly does.

This gloriously bonkers jukebox musical never takes itself too seriously.  Full of ridiculous humour and self-parody, it is very funny.

The story centres around the love story of two young dreamers, country girl Sherrie who has travelled to the Sunset Strip in LA to become a Hollywood actress, and Drew, who wants to be a rock star.  They meet in The Bourbon Room, a much-loved rock venue that is under threat from an evil property developer.  They are crazy about each other, but due to a misunderstanding, their relationship stalls.  Enter Stacee Jaxx, an arrogant rockstar who makes a move on Sherrie and pushes the young couple further apart.

Moving along with high energy, the show is narrated and held together by Lonny, The Bourbon Room’s irreverent sound guy, who doesn’t just break the fourth wall but attacks it with a wrecking ball.  He picks on a member of the audience (well done Greta), refers to an Acting for Dummies book, and calls on the ensemble for jazz hands.  Joe Gash plays the part of Lonny and, with his perfect comic timing, likeability and charismatic stage presence, he really is the star of the show.  There is a lot of innuendo in his role that, if played by a lesser actor, could be cringeworthy, but he performs it brilliantly.

Some of the biggest hits from the 80s feature in the show, including We Built This City, Here I Go Again, The Final Countdown and Don’t Stop Believing, which delivers a fantastic finale and gets everyone up on their feet.  The storyline and songs are interwoven effectively, and at times to great comic effect.  Andrew Carthy and Vicki Manser as mismatched duo, Franz Klineman and Regina, give a brilliant performance to Pat Benatar’s, Hit Me With Your Best Shot, although it will be hard to listen to the song in the same way again.  REO Speedwagon’s, I Can’t Fight This Feeling is another highlight that earns lengthy applause.

Sam Turrell and Gabriella Williams give strong performances as Drew and Sherrie. Gabriella has a beautiful tone, particularly in the slower songs, and Sam delivers the power needed for the rock numbers.   X Factor champion, Matt Terry gives a strong vocal performance as Stacee Jaxx but at times his comedic timing and acting is weaker than the rest of the high calibre cast.  Jenny Fitzpatrick gives an amazing vocal performance as Justice, and it is no surprise to see that she played Tina Turner in the West End. Coronation Street’s Kevin Kennedy as ageing rocker Dennis Dupree is a revelation.  Curly Watts, who knew?  The whole cast delivers a great performance and apart from a slight lull a short way into the second act, there is high energy throughout.

Steel scaffolding and speakers fill the sides of the stage, as if the audience is at a rock concert, and immediately sets the mood.  The Bourbon Room has its own stage and the talented musicians perform on this throughout the show.  A screen is used to create a sense of time and place and also includes cultural 80s references such as ET and Ronald Reagan. The props and costumes really evoke the world of 80s rock and special mention goes to Sherrie’s white, tasselled ankle boots.  Ben Cracknell’s lighting design is excellent, creating a real sense of energy and excitement that draws the audience into the world of the Sunset Strip.

Under the big songs and the comedy lies the pathos of individuals chasing their dreams.  As it’s pointed out on stage, no one is this audience has everything they want.  There is the realisation that life sometimes doesn’t work out and that dreams can be different from the ones you came for.

A great show with a strong cast, classic rock songs, and lots of laughter.  One not to be missed.