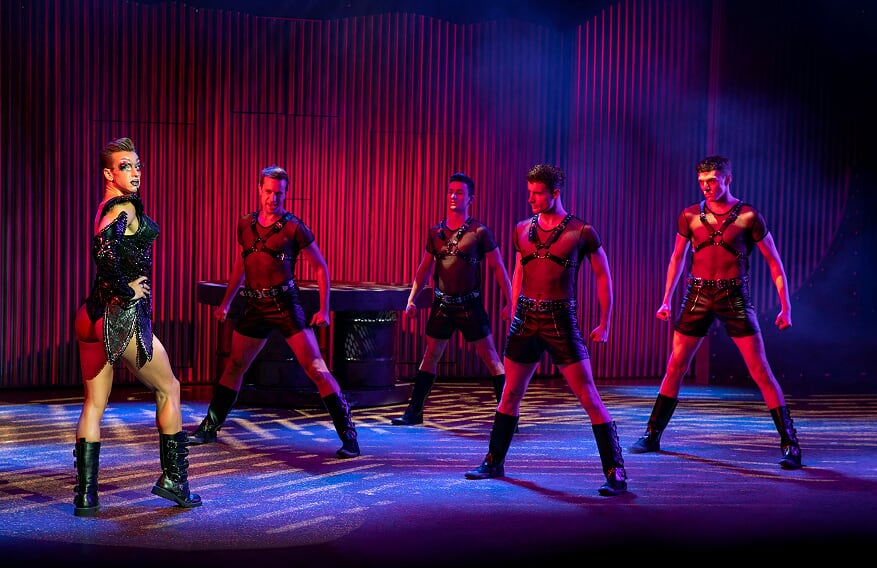 In 1994 Hugo Weaving, Guy Pearce and Terence Stamp starred in a film that simultaneously shocked and entertained the World. Following the journey of two drag queens and a transgender woman across the Australian Outback, Priscilla Queen of the Desert is a hilarious but endearing movie that contained underlying messages about how female impersonators experience life and are often negatively treated. So well received and revered was the movie (even winning both the Oscar and the BAFTA for Best Costume in 1995, as well as having numerous other award wins and nominations), that in 2006 a musical stage adaptation debuted in Sydney before hitting the West End in 2009. Huge theatrical success meant the show ended up travelling to more than ten countries over the next couple of decades and now in 2019, 25 years on from the release of the movie, the UK is lucky enough to receive another touring version.

This tour stars Joe McFadden as the central role of Tick/Mitzi, and sees him travelling to Alice Springs, a remote Australian town in the desert, to perform a show at the casino run by his wife, who also happens to be mother to the son he has yet to meet. Tick/Mitzi is accompanied by Bernadette, a transgender veteran drag performer played by Miles Western, and Felicia/Adam, an audacious and witty modern drag performer played by Nick Hayes, with who he will perform the show. The three purchase an old school bus, which they christen Priscilla Queen of the Desert, to travel the huge distance to their venue, experiencing various challenges and entertaining incidents along their route.

McFadden is no stranger to a musical and this shows in his effortless stage presence and his wonderful singing voice. Western boasts an almost endless list of theatre credits and it is easy to see why. His demeanour, vocal ability, and comic timing combined with his character’s dry delivery are superb, and he owns the stage. Hayes (Felicia/Adam) is probably more recognised as series regular Orson in Hollyoaks: in the City than for his theatrical accomplishments, but by no means does this suggest he isn’t at home treading the boards. He is truly the epitome of triple threat and executes everything he does flawlessly and with a cheeky smile on his face. He also deals with the rare moments where Felicia shows vulnerability with grace and sensitivity, changing between the contrasting states with effortless poise.

From the outset the show is hugely impressive. The choreography is jaw-dropping, with every single member of the ensemble move-perfect as well as the leads; the way every person on stage works together and delivers the movements with style and aplomb is genuinely remarkable. Predictably the costumes are equally as spectacular, Charles Cusick-Smith and Phil R Daniels the designers have truly surpassed themselves here, with each change bringing something new, elaborate and amazing; and those afore-mentioned changes (which become too numerous to count before the first act has even come to a climax!) astound in their speed and slick execution. The phrase ‘over-the-top’ has never been more appropriate, and that certainly is a positive.

There are of course a few scenes where the volume, vibrancy and extravagance of the show are dialled back – conversations between Bob (Daniel Fletcher) and Bernadette, the aftermath of Felicia’s fracas, and particularly the touching moments between McFadden and his son, played by Che Baccus, added a beautiful contrast.

Musically, not only are the three leads superb, but the live band is outstanding, the ensemble fantastic, and the Divas, three besequinned ladies with hugely enviable vocal ability, absolutely blow you away with their harmonies and power throughout.

It is impossible to imagine a bigger, brighter, more energetic show, and by the end, not a single member of the audience is sat without a smile on their face – although being honest, there isn’t a moment during the show at all where that isn’t the case. In the last 25 years the world has changed substantially, but what hasn’t changed is how entertaining, heart-warming and thoroughly brilliant Priscilla is. This show is the best night out you will have for a very, very long time.