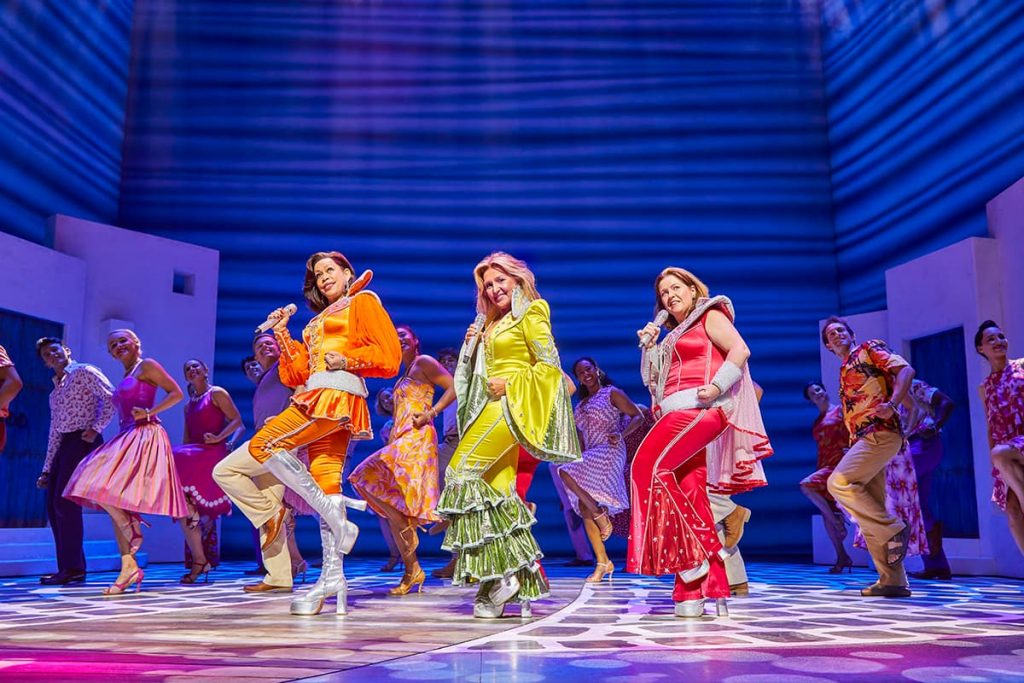 There are few musicals in London that are as synonymous with the West End as MAMMA MIA! the seventh-longest running show in West End history, which blasted onto the scene in 1999. Now in its twenty-third year, the MAMMA MIA! juggernaut shows no sign of slowing down. Still one of the biggest parties in town, the show has been seen by over 65 million people worldwide.

A jukebox musical featuring the songs of ABBA, MAMMA MIA! tells the story of Sophie, who is determined to have her dad walk her down the aisle at her upcoming wedding. The problem is, there are three potential candidates for the role. Sophie’s mother Donna has never told her who her father actually is. Having secretly read Donna’s diary, Sophie has narrowed it down to three possible men. She covertly invites them all to her wedding on the fictional Greek island of Kalokairi, all three accept unbeknown to an oblivious Donna. What ensues is a hilarious farce of ‘who’s the daddy’ set to a soundtrack of ABBA’s iconic back catalogue.

The current cast of MAMMA MIA! is led by vocal powerhouse and West End stalwart Mazz Murray as Donna Sheridan. Interestingly this isn’t Murray’s first rodeo with MAMMA MIA! she played the role of Tanya from 2015 to 2017 returning to take up the role of Donna in 2019. Murray is the perfect Donna, aghast at Sophie’s stunt she hilariously navigates a sudden rush of feelings she thought were long buried and dalliances she thought were in the past. Murray belts out classic after classic, elevating the score to new levels, but it is her rendition of The Winner Takes It All, that truly steals the show. Emotional, palpable, and powerful, it is the vocal performance of the night.

Murray is complemented beautifully by Josie Benson as the man-eating cougar Tanya and Gemma Goggin as the effervescent Rosie, Donna’s larger-than-life best friends. The trio brings the giggles and shenanigans in abundance as they help Donna navigate her quandary whilst getting up to their own mischief in isolation. Benson delivers a riotous performance of Does Your Mother Know alongside the athletic and cheeky Alexandros Beshonges as willing cougar bait, Pepper. Goggin equally delivers a hysterical performance later in Act Two in her duet of Take a Chance on Me with Stephen Beckett as Bill.

Emma Mullen is charming as Sophie and her relationship with fiancé Sky (Jack Danson) is endearing and feels genuine. Mullen and Murray are believable as mother and daughter and produce a gorgeous duet of Slipping Through My Fingers, which momentarily brings a note of seriousness and sincerity to proceedings. It’s a beautiful moment and just allows the energy in the room to return to normal before the next pulsating number.

The trio of would-be fathers offers wonderful contrast, and each brings their own individuality to their respective roles. Richard Trinder brings the most character development with his character Sam, initially quite unlikeable he develops beautifully and his love for Donna really builds in an authentic manner. Stephen Beckett is a dream as the rough round the edges Bill and his comedic timing is on point. Neil Moors, brings an endearing likeability to the loveable Harry, which makes him a firm audience favourite.

MAMMA MIA! boasts an incredibly large and diverse cast. The talent and energy on that stage cannot be underestimated. Anthony Van Laast’s choreography is complex, high energy and relentless, and the entire company deliver it with apparent ease. It is testament to the talent on show when an entire cast can make such energetic choreography look effortless. The movement and attack during Voulez-Vous are astonishing.

If you are looking for highbrow theatre, then MAMMA MIA! is not the show for you. However, if you are in the market for a vibrant, energetic feel-good musical with a party atmosphere then this show will deliver that in abundance. Judging by the furore that has greeted ABBA’s recent new music and upcoming tour, this show will continue to endure on the West End. It’s pure, unabashed joy from beginning to end. Prepare to fall in love with this musical all over again – still a Super Trouper of a show.