REVIEW: Mamma Mia! Get ready to be a Dancing Queen & give the box office all your Money Money Money – You’ll want to go again & again! 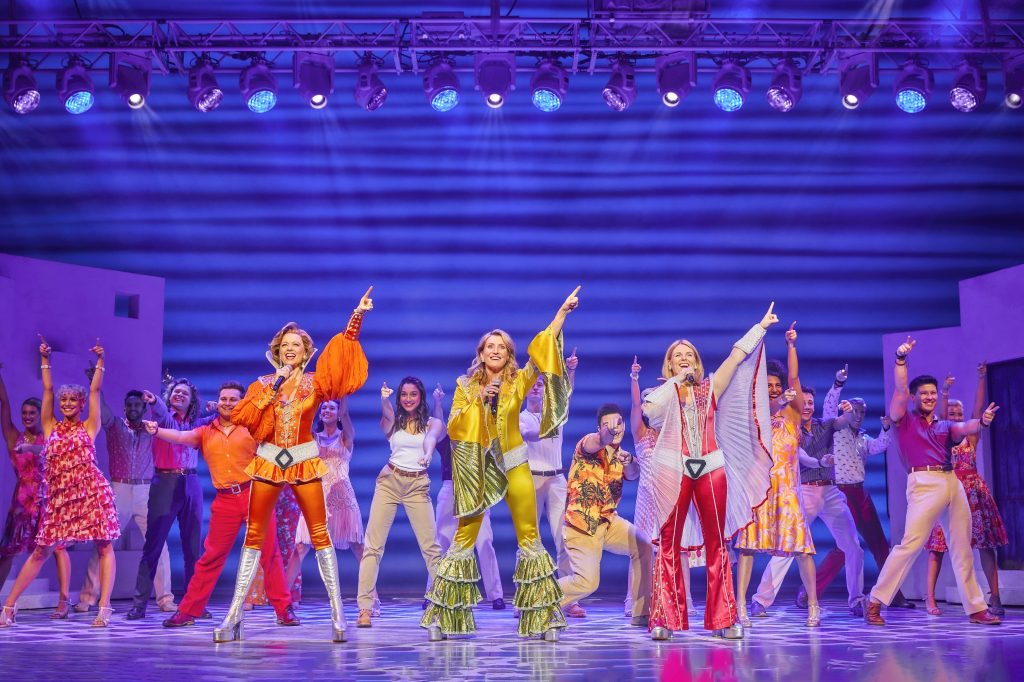 Directed by Phyllida Lloyd, with music by the spectacular ABBA, Mamma Mia! follows bride-to-be Sophie on her quest to get her father to walk her down the aisle. Things don’t exactly go to plan though when three men could potentially be her father. So, she invites all three, without telling her mother, what could go wrong? Set on an idyllic island in Greece, this hilarious, feel-good musical is a force to be reckoned with.

From beginning to end, Mamma Mia! is a triumph with near-flawless casting, it’s clear to see why the musical has been successfully running for so long.

Made famous by the incomparable Meryl Streep, Donna Sheridan is a role not easily mastered, but Sara Poyzer takes it in her stride. Having seen Mazz Murray, expectations were high, yet Poyzer exceeded them still, she is the true embodiment of the leading lady. Her charisma and character are unmatched.

Every single cast member from the ensemble to the leads deserves every single bit of praise they receive, as they were all phenomenal. Let’s not forget the creatives responsible for costumes (Lee Kerry), production design (Mark Thompson), and set (Jonathan Allen) who all make the show the success that it is.

Whilst the set is simple and props are few, they are not needed to portray the storyline.  Everything is so cleverly designed so that choreographed chaos can take place during party scenes without the issue of clearing a cluttered stage. Even though the staging may be too simple for some, it is used to its full extent, from rotating walls that some cast climb, to the famous blue barn door, it is seamlessly simplistic.

Do not let the air of simplicity fool you, the reason for less staging is so that the cast can truly let loose and cause utter mayhem. For example, the gaggle of groomsmen parading across the stage in scuba fins hardly needs an intricate backdrop – it speaks for itself. As does the raucous laughter from the audience.

Alongside Sara as Donna is Nicky Swift as Rosie, and Helen Anker as Tanya, both of which are hilarious in their own right, but put the trio together, and you have a complete tour de force. You’re going to want them for more than one night only.

Anker truly commands the stage in every scene she’s in, with a highlight being the famous ‘Does Your Mother Know?’ scene. She and Pepper (James Willoughby Moore)’s chemistry and back-and-forth are a joy to watch.

Though only given one main scene in the film, Pepper gets much more stage time in the musical, and he deserves every moment. With endless enthusiasm and boundless energy, James Willoughby Moore is the perfect rendition of this character.

It would be easy to list every single cast member, and they all truly deserve it, a special shout-out needs to go to Jena Pandya as Sophie Sheridan as this tour is her professional debut, and she is smashing it! Despite being a brunette singing about having golden hair (small technicalities), she is a class act, portraying the hopelessly naïve Sophie incredibly well. Based on this powerhouse professional debut, she’s going to take the theatre industry by storm.

Not to be forgotten are the three dads themselves. Phil Corbitt plays Bill Austin, Daniel Crowder plays Harry Bright, and Richard Standing plays Sam Carmichael. Despite being three complete strangers in the show, these three could pass off as lifelong friends with how they interact on stage. They are another example of the perfect casting; three completely stereotypical nerdy dads are exactly what you need for this trio, and they give you that and so much more.

If you’re wanting a fun, talented cast, then this ensemble has that in spades. Whether you’ve seen the film, are a fan of ABBA, or have never heard of Mamma Mia! before, this is not a show to miss.

So hurry up, get ready to be a Dancing Queen and give the box office your Money Money Money for tickets now, don’t let the opportunity slip through your fingers!

Runs Until: Saturday 14 May and on tour