REVIEW: Joseph and the Amazing Technicolor Dreamcoat – A show just as dazzling as his coat of many colours 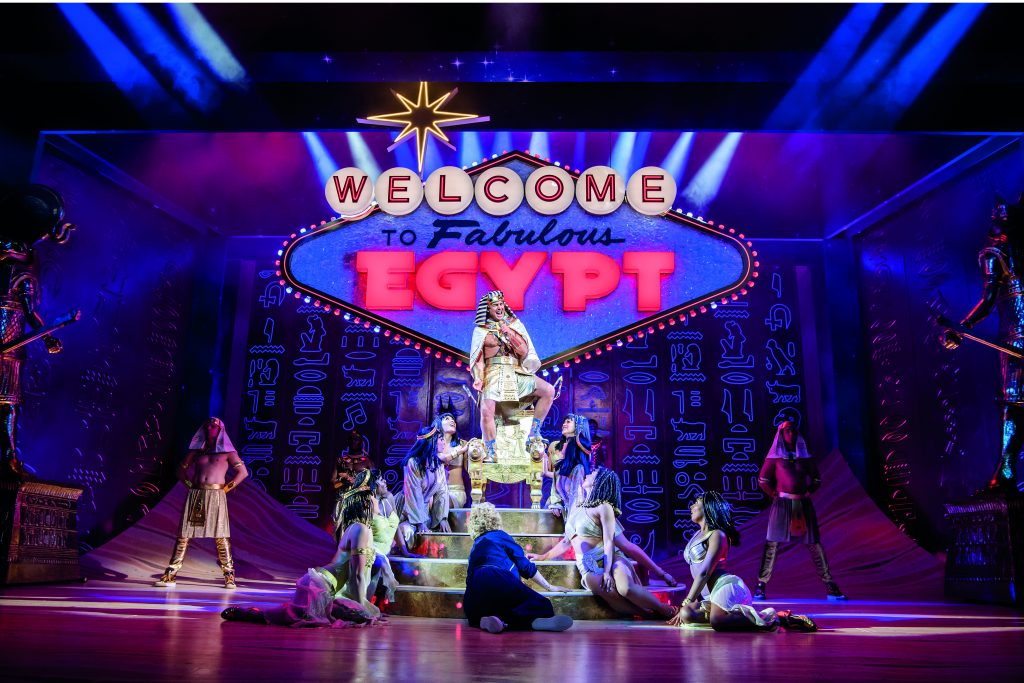 Joseph and the Amazing Technicolor Dreamcoat is a production that many have seen, or experienced, in school plays, however, to see it on a large stage is such a phenomenal experience and definitely worth it.

Alexandra Burke stars as the Narrator, and what a star she is. This production truly gets their money out of Alexandra, as she flits from acting as the Narrator to Jacob, to the Potiphar’s wife, and many more – it’s hard to keep track of just how many cameos she has.

For this performance, there was a show stop caused by technical difficulties, but it was handled with utmost professionalism by Alexandra, she even made some jokes about it once the issue was resolved.

Anyone who believed Alexandra Burke to be stunt casting will be proved wrong once they see her in this role, she is phenomenal and is the true backbone of this entire production. Throughout this entire masterpiece of a show, the cast truly is having fun and just running with any hiccups that come their way. It is fantastic that this show doesn’t take itself too seriously, it genuinely works in its favour, especially in the more satirical sections like the ‘One More Angel in Heaven’ scene.

Out of Joseph’s eleven brothers, there are three who stand out who really go above and beyond in their roles. Shane Antony-Whitely as Isaachar, Jabari Braham as Levi, and Tyler Ephraim as Dan are all hilariously over-the-top renditions of their characters and truly capture your attention.

Not to be left out, the entire gaggle of talented children is fabulous throughout the show. Initially, it seems like they’re there to set the scene, but it’s quickly shown that they stick around as integral parts of the how complete with hilariously horrific fake beards.

Every single song throughout the production is a criminally catchy masterpiece. Be prepared to be chanting ‘go, go , go Joseph’ to yourself for days afterward. Andrew Lloyd Webber and Tim Rice really hit the nail on the head with this soundtrack. Whilst there are the expected influences from Egyptian music, there are also tracks in a Parisian style and even a track in a southern country twang. There are just enough belts and high notes to leave the audience breathless, yet it still stays easy to follow and memorise, giving the entire cast ample opportunity to show off their talents yet still just have fun.

Fun they do have with this show. From peddle bike camels, to sheep on skateboards, and from a rockstar Anubis, to Joseph’s own cheerleaders, this production is a joyous, infectiously funny celebration of theatre perfect for the whole family.

Jac Yarrow is a force to be reckoned with as the titular character, Joseph. His bright, youthful persona is adorable and perfect for the happy-go-lucky Joseph. Yarrow is a bright star, almost as bright as his coat, and it is clear to see why he keeps getting brought back to star in the production.

The coat itself deserves its own mention as it is astronomically beautiful. Costume designers Morgan Large and Lee Tassie should be incredibly proud of this creation.

Not to be forgotten, Jason Donovan is also no stranger to Joseph and the Amazing Technicolor Dreamcoat after a record-breaking run in the show in the 90s. Now he stars as the Elvis Impersonator that is the Pharaoh. It’s a relatively small time on stage, but still leaves a mark.

Described by one of Joseph’s brothers as “the gayest in the bible” this show is a complete masterclass of talent, utterly flamboyant and completely insane, it’s fantastic.

Joseph and the Amazing Technicolor Dreamcoat is fun for the entire family. There are remarks and comments that adults will catch but will be lost on children – allowing them to continue in blissful innocents whilst their parents have a little chuckle. If you have been hesitating about purchasing tickets to see Joseph, there is absolutely no question, it’s not a show to miss.

It will be staying at Birmingham Hippodrome until 16 April before continuing on its tour around the UK.

Runs until 16 April 2022 at Birmingham Hippodrome and on tour