REVIEW: Jason Kravits – Off The Top: A thoroughly enjoyable evening of hilarity & randomness 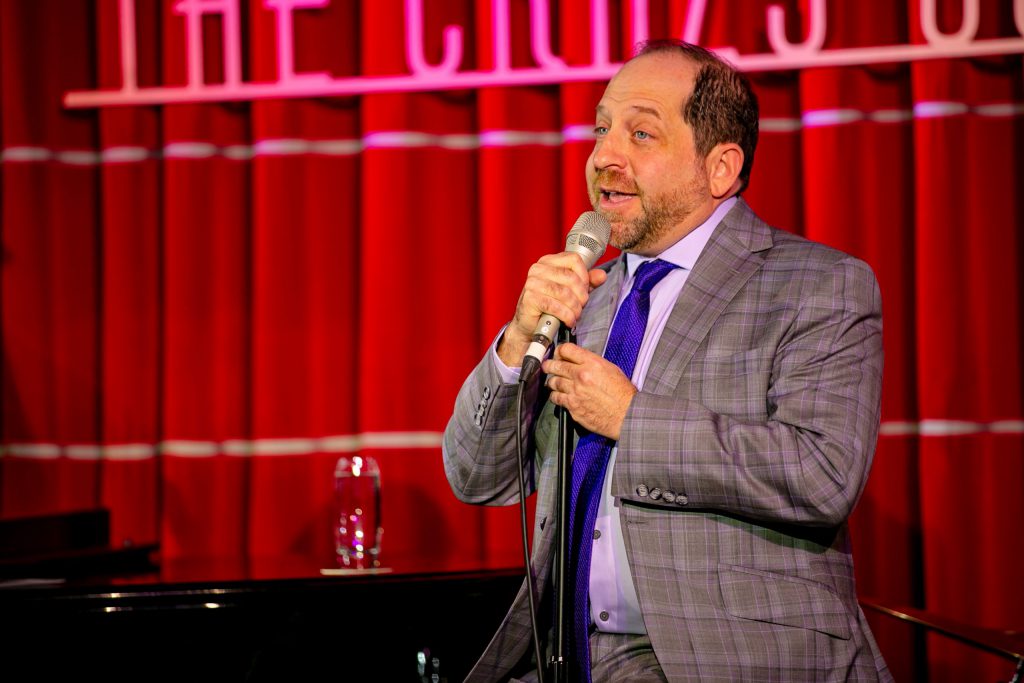 It’s impossible not to feel nervous for anyone who vulnerably puts themselves on stage, sans script, with absolutely no idea what they are about to say, sing or do. Anything can happen. The sheer (positive) chutzpah this takes, as a performer, is admirable. Jason Kravits; a charismatic American, adorned in a snazzy suit that is beautifully fitting of a TV star and Broadway sensation, greets us with high energy and instantly likeable persona. He is an immediate hit and off to a strong start.

Supported by a band of three (phenomenal and experienced improvisation guru John Thorn on the piano, Jonny Gee on bass and the naturally gifted Sophie Alloway on drums), they come together to create a fabulous piece of art. The Crazy Coqs is a fantastically intimate venue, which only adds to the relaxed and friendly ambience.

Anything can go wrong in this improvised comedy spectacular and Kravits joins the audience in not knowing what delightful dramas will unfold. Kravits leans on audience participation via suggestion cards of things such as “words to live by”, “a short phrase” and “the last text you sent you received”, for the basis of his script. This makes for a random yet hilarious account of a fictitious character the audience has unwittingly created.

Kravits uses the audience’s offerings as the basis of his narrative and vocal numbers, which means you are in for a treat. Audiences can be so cruel, as they relish at the thought of seeing how the poor man can make a musical success of things such as toilet brushes and lifeboats, yet the uncomfortable or awkward nature of audience suggestions makes hilarious viewing.

His musical improvisation success is aided by a natural understanding of harmonic progressions (cue the Broadway experience). How he makes up such flowing lyrics, on the spot, beautifully backed by a band that plays alongside as if they have rehearsed this exact song together a thousand times before, is truly a rare talent to behold.

Singing freely and eloquently about wet sock factories, racquet stringers, cats and Grimsby, one can’t help but feel sorry for Kravits at times, however, the way in which he hilariously and effortlessly brings such a random cacophony of elements together is the mark of a true professional and born entertainer.

There is a different supporting act (or acts) every evening, which breaks up the one-man-band feel, adding new excitement to the performance. With Kravits being such a seasoned comedic and vocal performer, the support act needs to be at the top of their game to keep up. Ruth Bratt’s vocals and on-the-spot thinking just about measure up and with a new act every evening, the success of some parts will rely on the strength of the supporting act.

Jason Kravits’ evident musical skill and natural comedic timing, paired with his charisma and instantly likeable character is a recipe for success from the off. The band effortlessly work together in creating some fantastic musical numbers, which flow between with some equally strong audience interaction. The fact that nothing is predictable keeps the content and experience fresh and exciting.

For a thoroughly enjoyable evening of hilarity and randomness, Off The Top is fantastic entertainment, with Jason Kravits shining with talent. Yet another success for The Crazy Coqs; a venue that never fails to impress. With guests Joe Stilgoe, Sarah-Louise Young, Josie Lawrence, Rachel Tucker, and Le Gateau Chocolat, this is not to be missed.