REVIEW: How Love Is Spelt – a timely revival of a beautifully written piece of theatre 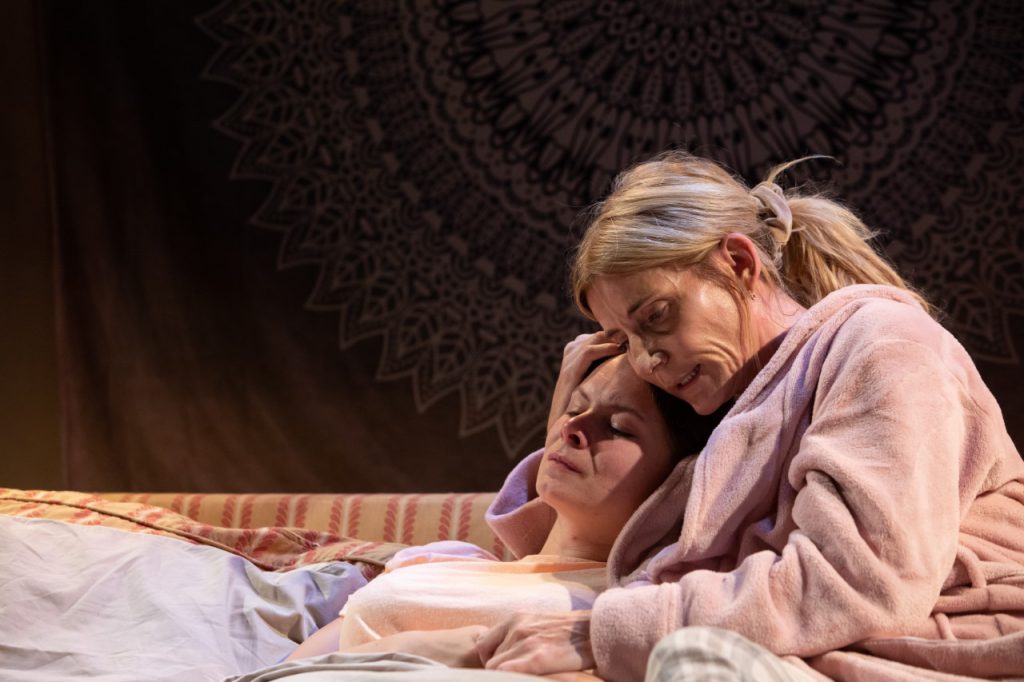 How Love Is Spelt was first produced at the Bush Theatre in 2004, a venue known for its commitment to creating a space that nurtures and develops new artists and their work. The play by Chloe Moss is now enjoying its first major revival as it takes up residence in The Little of the Southwark Playhouse.

How Love Is Spelt is a complex play which centres on 20-year-old Peta who is new to London and opens the morning after a one night stand. The action stays physically rooted in Peta’s crummy flat with her interactions with various characters central to the piece. Through a series of brief encounters with strangers, Peta strives to understand what it is that she’s truly missing. Being an independent woman in the big city during the dawn of new millennium isn’t easy, and the play chart’s Peta’s struggle with truth, loneliness, self-preservation and an overwhelming desire to escape her previous life.

Larner Wallace-Taylor is a revelation as Peta. She remains on stage for the entire duration of the play and she provides an astonishingly nuanced and multilayered performance as the conflicted Peta. As she desperately tries to reinvent herself by embodying other people within each encounter the intimacy of the venue comes very much into play. In The Little of Southwark Playhouse, there is nowhere to hide; the audience can see every single facial expression, every flicker of emotion, every movement and to deliver such a committed performance in such an intimate space is no mean feat. Wallace-Taylor treats Peta’s journey with incredible care, making it impossible to ever really understand Peta’s motives, drive and whether she is being genuine, economical with the truth or outright lying.

Her supporting cast each bring a different dimension to the narrative, Benjamin O’Mahony as Cockney wide boy Joe brings a cheeky charm and rough and ready confidence to Peta’s uncomfortable awkwardness. Their encounter and exchange is peppered with humour and O’Mahony brings incredible warmth to his role. Duncan Moore provides a solid turn as uptight history teacher Steven whose lack of confidence around the opposite sex is as endearing as it is comical.

Yana Penrose is wonderful as the bubbly Chantelle who wakes up in Peta’s flat after a night on the town. Their exchange offers a different dimension to those with Joe and Steven and through this encounter, it is possible to see Peta’s insecurities and jealousy of the vibrant and effervescent girl she has befriended.

Moments of tenderness come from stage and screen stalwart Michelle Collins, who puts in a wonderful performance as Peta’s chain-smoking yet kindly neighbour Marion. We have to wait until Act 2 to see Collins but it is worth the wait. Her interaction with Peta is incredibly tender as both women clearly have regrets regarding their own mother-daughter relationships.

Peta’s final encounter is with the enigmatic Colin whose presence up until the final moments has been restricted to a simple black and white photograph on Peta’s bedside table. Nigel Boyle delivers an incredibly assured and authoritative performance which is second only to Wallace-Taylor herself. The two play off each other in a believable cat and mouse battle of wills and the exchange goes some way to resolve Peta’s motivations for suddenly upping sticks and heading to London.

How Love Is Spelt is a touch on the long side with the first act significantly longer than the second. Charlotte Peters’ direction is incredibly intricate and so much is spoken through movement and actions rather than just the script itself, the strength of the piece is so much more than the words.

How Love Is Spelt is an incredibly raw, honest and modern representation of the difficulties of navigating life in the 21st century and how being desperately lonely can being perilously confronting, frightening and debilitating. The piece is bookended by an incredible individual performance by Wallace-Taylor and does leave you with more questions and answers; despite this, it’s wonderfully tender and a timely revival of a beautifully written piece of theatre.