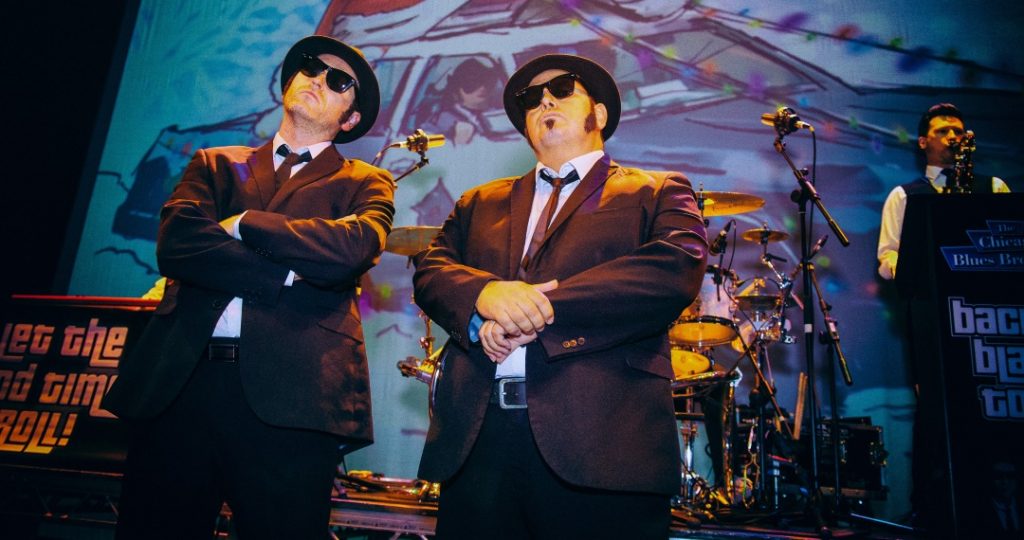 The Blues Brothers movie first hit the screens in 1980.  With its fantastic rhythm and blues music and quotable lines, it became a cult classic.  The trilby hats, suits, and dark glasses of Jake and Elwood Blues, played by John Belushi and Dan Ackroyd, became an iconic look that remains instantly recognisable.

For over 30 years, The Chicago Blues Brothers have been touring the globe.  Be warned, it is not a live version of the film.  Instead, each production aims to recreate the feel of The Blues Brothers and is based around a theme, such as Motown Mission and the Jailbreak Tour.

The current tour, A Night at the Movies, features an 11-piece band and delivers two hours of movie anthems from films including Footloose, Dirty Dancing, and The Full Monty as well as some of the classics from the original film.  The music is great, performed by talented musicians and singers who give a high energy, engaging performance throughout.  Chris Hindle, who also produces the show, and Gareth Davey really deliver as Jake and Elwood.  Their voices are strong, and they play the characters convincingly.  Also known as ‘Disco Davey’, Gareth Davey is a great dancer.  Somehow, he manages to deliver Elwood Blues dancing as Patrick Swayze.  A sight not to be missed.

They are accompanied by the Sweet Soul Sisters, who deliver great performances including an Aretha Franklin medley, Walking on Sunshine, and a standout performance of Never Enough from The Greatest Showman.

In between the songs, there is amusing banter between the cast, although some of the other jokes, particularly those aimed at the Sweet Soul Sisters, are dated.  The cast engages with the audience, who really responds to the ongoing question of whether the trumpet player will be allowed to sing La Bamba.

The show is held together by the concept of the brothers being trapped in a Blockbuster video store.  The clever use of film on the backing screen creates dimension and movement, and it does stay true to The Blues Brothers’ theme.  However, in an attempt to deliver something new, it does feel that something has been missed.  The songs are so varied that there is a lack of cohesion and, at times, veer into cover band territory rather than a West End show.  Possibly some more well-loved classics would strengthen the overall production.

The second act is definitely stronger and includes a fantastic performance of Ray Charles’ Shake Your Tailfeather.  It is a testament to the performers’ energy and talent that the audience was quickly up on their feet and stayed dancing for the rest of the second act.

A fun night with great music.  Get your dancing shoes on and be ready to shake your tailfeather.

On tour nationwide until 2 December 2022