REVIEW: EUAN – A surreal and farcical hour of theatre 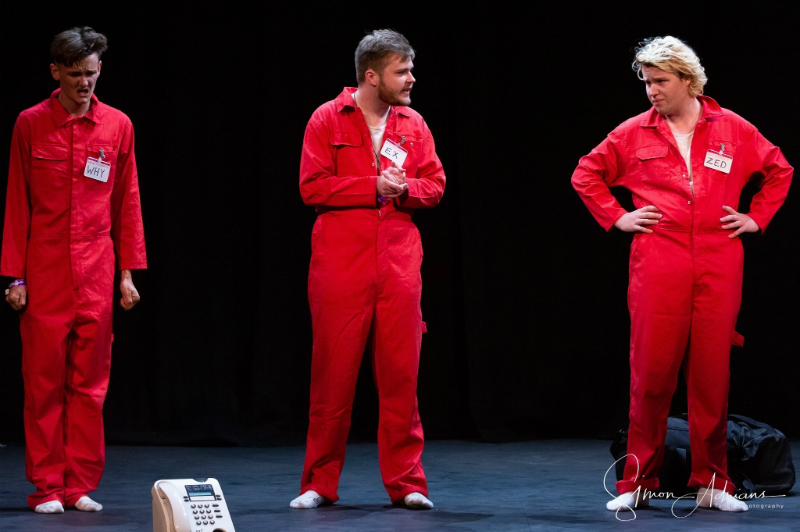 Venue: The Lion and Unicorn Theatre

Who is EUAN? What is EUAN? Why is he so important? Given that ChewBoy Productions have written a whole play about him some resolutions to these glaring questions are expected. However, after an hour of quite possibly the most barmy and farcical theatre currently on offer, the audience is left with a whole host of questions and precious few answers.

Set in the basement of an undisclosed location, Ex (Georgie Bailey), Why (George Craig) and Zed, (Hal Darling) are supposed to be minding EUAN for their mysterious boss but they’ve managed to lose him. Cue a farcical hour of theatre as the three frantically try to locate EUAN before the boss arrives. Waiting For Godot meets The Inbetweeners in this surreal and bizarre three-handed play.

The piece was inspired by a chap called Euan betting ChewBoy Productions co-founder Georgie Bailey that he couldn’t write a play just using his name. Georgie rose to the occasion and produced a 20-minute rehearsed reading for him. Realising there was something in it, Georgie and his other co-founder Hal Darling enlisted the skills of George Craig to help create a full-length piece. The result is the incarnation of EUAN which was first seen at The Tristan Bates Theatre before making its way to Kentish Town’s Lion and Unicorn as part of Camden Fringe.

EUAN is a piece of theatre that epitomises all things Fringe, it’s unconventional, experimental and completely distinct from the mainstream which is what makes it so appealing. Incredibly fast-paced, there is no let-up in the narrative. Whilst the narrative is a tad thin, all three actors work incredibly hard to deliver the piece and none more so than Craig. From the word go the sweat drips off him which is a testament to his commitment to the role. He is by far the most animated of the three, regularly breaking the fourth wall and hilariously engaging with the audience he puts in quite an extraordinary performance.

Bailey’s character Ex is aggressive and volatile yet annoyingly likeable, the self-imposed leader of the group he provides stability to Ex’s manic and hyperactive personality. Darling’s Zed provides a balance of hilarious bluntness and abstract bewilderment at the situation the boys find themselves in. Lucy Betts’ direction offers a pacy dynamic to proceedings; with the actors working at a hundred miles an hour as the story goes round and round in circles. Betts takes risks with her direction; with a furiously fast-paced dialogue which at times lacks coherence as the characters talk (and shout) over each other.

In the end, there are certainly more questions than answers, is EUAN a metaphor to represent a deeper meaning or is he really as literal as the (almost) reveal at the end of the piece suggests? It’s probably best not to think too hard on it because it’s pretty much a guarantee that no two audience members will have the same interpretation. If surrealist theatre is your thing then you will love EUAN. Even if it’s not, it’s impossible not to find these talented guys endearing, the passion they have for their work is obvious and they are a joy to watch.