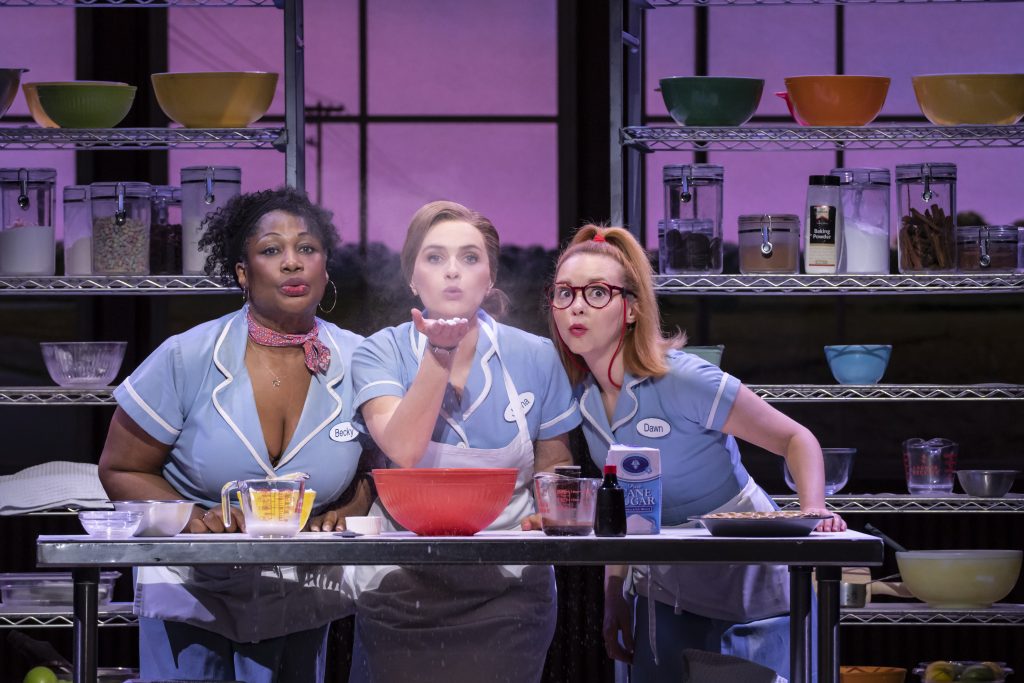 Based on Adrienne Shelly’s 2007 indie film of the same name, Waitress is a rom-com musical about an underappreciated pie chef, Jenna (Chelsea Halfpenny), who spends her days baking pies and waiting tables at a small-town American South diner. Jenna has a remarkable talent, but she is poor and miserable, going home every night to an abusive alcoholic husband, Earl (Tamlyn Henderson). After an unplanned pregnancy gives her a much-needed wake-up call, Jenna’s life takes a turn for the better. But leaving an abusive relationship is a process. It doesn’t generally happen overnight. With a score by Grammy-winning singer-songwriter Sara Bareilles, Waitress depicts how that process unfolds over a timespan of several months, as well as developments in the lives of Jenna’s likeable, frequently laugh-out-loud hilarious colleagues, the wise and maternal Becky (Wendy Mae Brown) and geeky Dawn (Evelyn Hoskins).

Waitress is currently showing at Birmingham Hippodrome, where it runs until Saturday 21 May. It’s a distinctly American story, although its core appeal is ultimately an emotional one that transcends geographic borders. It’s a musical about striving for something better than your circumstances can offer you. Nothing new there, but it doesn’t need to be, especially given that the original Waitress production broke genuine new ground by being the first show on Broadway to be produced by an all-female team (in 2016, shockingly enough).

As well as being about longing, Waitress is a musical about womanhood; Jenna is confronted early on with the choice of whether to keep her pregnancy, and she expresses ambivalence about becoming a mother. In a less progressive production, Jenna might be portrayed as instantly thrilled about her looming motherhood, but Waitress is honest about the fact that women have complicated relationships with gender roles. There’s an impressive balancing act, where serious subject matter like domestic abuse and the sexism experienced by pregnant women is addressed, but you’re rarely far from the next laugh.

Waitress has been described as a feminist musical. “Feminist” is a weighty label, and the musical’s female characters aren’t exactly radicals. However, they’re portrayed as generally supportive of one another, and as possessing levels of emotional depth and intelligence that aren’t always afforded to working-class women in theatre. The sisterhood displayed between the women of Joe’s Pie Diner is reminiscent of that of the much-loved 1989 movie Steel Magnolias, where Southern women from different generations bond in the feminine environment of a beauty salon.

Of Jenna’s colleagues, we learn that Becky is a carer for her husband, while Dawn is deeply eccentric, meaning her dating options are limited in a small-town context, although her predicament is happily resolved when she meets her “soulmate”, Ogie (George Crawford), who has the audience in hysterics with his over-the-top expressions of adoration for Dawn. These are most memorably expressed in the infectious “You’re Never Getting Rid of Me”.

Meanwhile, Becky’s storyline of being stuck in a sexless marriage has the potential to be deeply depressing, but it’s portrayed with plenty of humour. Wendy Mae Brown’s performance in the role is a massive standout; not only does she deliver one-liners with aplomb, but her vocals in solo number “I Didn’t Plan It” are outstanding.

It’s possible to reflect on the merits of Waitress at length without ever mentioning one of the main plot points, Jenna’s affair with her gynaecologist, Dr. Pomatter, who is played by a dashing Matt Jay-Willis, who many will remember from his time in chart-topping boy band Busted in the 2000s. To be clear, Jay-Willis is a fantastic actor and the chemistry between Pomatter and Jenna is highly believable. But Jenna’s self-actualisation comes before any man, which makes Waitress a rom-com with a difference.

An utterly charming production, Waitress is well worth your time.

Runs Until: Saturday 21 May and on Tour