REVIEW: The Prince of Egypt – well worth a visit, & maybe even a return 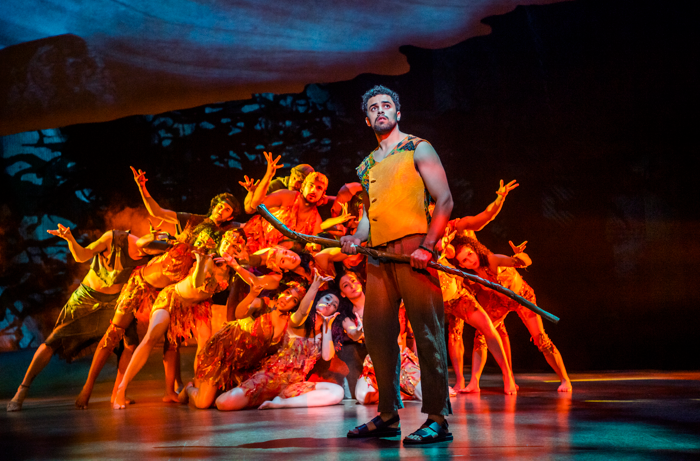 Luke Brady in the Prince of Egypt at the Dominion Theatre, London. Photo: Tristram Kenton

Based on the iconic 1998 DreamWorks film of the same name, The Prince of Egypt is a brand-new musical making its debut in the West End at London’s cavernous Dominion theatre. With expectations high for this show before it had even opened, it does not disappoint.

The show follows the biblical story of Moses. Charting his life from his mother leaving him floating down the river in a basket in an attempt to preserve his life; through to adulthood where he is willing to risk everything to give his people a better life.

Act one is seamless with every scene and song blending together and flowing beautifully, with high energy numbers and the narrative never waning. Whilst the first act is slightly long at 80 minutes, the pacing of the show doesn’t make it drag or feel as long.

Act two is when the show slows down in content. It starts and ends with lots going on, fast-paced and the action, emotions and the stakes running high. However, it feels in the middle of the second act there’s a chunk of the show with a lot of time with not as much happening which can slow the feel of the piece down.

The music and lyrics in the show are phenomenal; from the ensemble numbers that have genuine power behind them to the softer ballads. Of course, the hit song from the film When You Believe has been included but adapted for the stage. The lyrics and music are both equal parts beautiful and emotive, something to be expected when they were written by Stephen Schwartz, the man who gave us Wicked. Every song feels impactful and has the power to pull on the heartstrings.

Where the costumes are less dazzling than expected, the set makes up for this. Designed by Kevin Depinet, there are not huge set pieces in residence, with the stage itself surprisingly and cleverly keeps adapting and moving as the show progresses. Furthermore, parts of the set do expand out slightly into the audience and with the use of projection and lighting, as designed by Jon Driscoll and Mike Billings respectively. This added detail acts as a feeling of immersion into the world.

Luke Brady as Moses is fantastic and perfectly conveys the transition from a cheeky and mischievous young man, into a matured adult who is aware of his own responsibilities. Similarly, his on-stage chemistry with Liam Tamne, who takes on the role of Ramases and his ‘brother’, feels genuine and brings an additional layer of emotion. As well as this, their relationship does a good job at emphasising the importance and strength of brotherhood and highlighting that family does not always mean blood.

The ensemble are outstanding and the choreography, courtesy of Sean Cheesman is flawless. Not only are there some incredible dance breaks that showcase the talent and flexibility of the ensemble; but there are also sections where choreography is used in a stylised way to tell parts of the story and some rather significant plot points. Likewise, the cast does a good job of using the whole stage and not confining themselves to one spot. A type of storytelling and movement not often seen, this aspect of the show makes it memorable and stands out against other musicals.

With the increase of Broadway transferred shows in London, and a small portion of shows seeming to revolve around teenagers and present-day struggles, The Prince of Egypt feels fresh, new and different but at the same time classic. Despite being a bit slow in act two, The Prince of Egypt is a feast for all the senses. A breath of fresh air to shake up things in the West End, this show is well worth a visit, and maybe even a return.