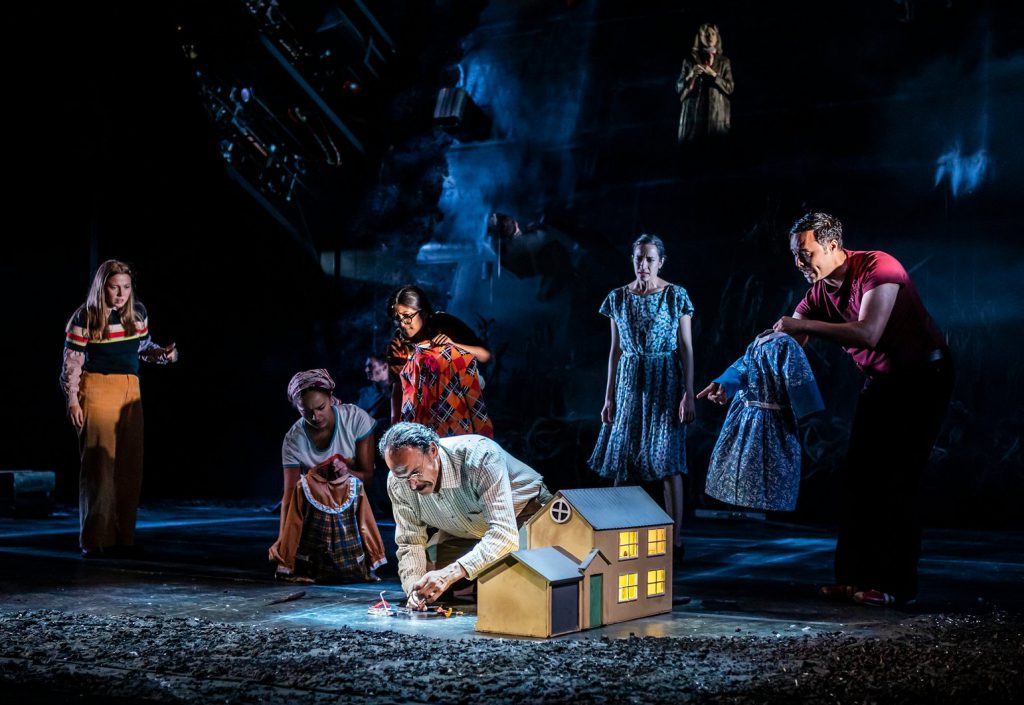 The cast of The Lovely Bones – Photo Credit Pamela Raith

A second-life is given to Bryony Lavery’s adaptation of Alice Sebold’s 2002 novel The Lovely Bones this autumn. Premiering at Northampton’s Royal And Derngate Theatre in 2018, The Lovely Bones captures the heartbreak of the brutal rape and murder of 14-year-old Susie Salmon. This year’s tour stretches a little further than its 2018 producing houses, kicking off at the Birmingham Repertory Theatre following its short residency in 2018.

Set in the 1970s, The Lovely Bones uses popular music including tracks by Tears For Fears and David Bowie to transport the audience to an era before people believed that crimes as heinous as serial rapes and murders were possible. This pre-Ted Bundy life was perhaps less complicated than the suspicion thrown around in today’s society. Maybe being suspicious isn’t always a bad thing; perhaps the play wouldn’t be as unsettling without just one or two characters being wary of Susie’s attacker.

While the plot doesn’t scream a nice evening in the theatre, this story is beloved due to its portrayal of grief. Susie’s family must come to terms with their loss, through poignancy and humour. The Lovely Bones is dark – harrowing – but it is also a coming-of-age story. Every single audience member can relate to a number of characters throughout the two-hour play.

Charlotte Beaumont captures the essence of Susie beautifully. The way she responds to the action on stage is a true narrative of any young teenager, and her growth throughout the production is admirable. Never leaving the stage, Beaumont ferries the play along trying to navigate unknown territories. Mainly in a heaven, she does not want to be in.

Jack Sandle’s portrayal of Susie’s father (also named Jack) is another standout performance. As each day, week, month and year pass, Jack simultaneously shows the grief he has over the loss of his daughter and the strength he has learnt to overcome this loss.

Fanta Barrie’s performance as Susie’s sister, Lindsey, is almost as heart-wrenching as that of her father. While Susie is frozen at age 14, Lindsey must grow without her older sister’s guidance. In a particularly difficult scene, we see Lindsey evade capture by her sister’s murderer. She learns the identity of the man who committed a heinous crime against Susie and without this evidence, it is unlikely that the story would ever come to a well-rounded conclusion.

Matt Haskins lighting design in this production of The Lovely Bones wows the audience from the moment the play begins, with strobe effects from the outset. This magic show of lighting is not only a wonder in itself, but rather amplifies the beauty of the set. Ana Inès Jabares-Pita’s design is simplistic, yet effective. Notably, the mirror spanning the width and depth of the stage slopes ​at a 45 degree-angle, reflecting Susie’s view from above. In a particularly sorrowful scene, Susie is seen screaming into her attacker’s face, yet they are nowhere near each other. The clever angles and lighting add to the supernatural feel of The Lovely Bones.

Perhaps the only lighting criticism may be that in the day of smartphones, audience members need a little more warning that a show is about to start. The powerful strobes shooting into the darkness of the auditorium loses its dramatic effect when bright screens light up the faces of those in the audience, as opposed to the bright strobes. Otherwise, this production is a masterclass of why lighting design is so important in a show. The scene is set, suspense is built, and overall it tells a story. A sublime story.

The Lovely Bones is a moving tale, depicting the highs and extreme lows following the loss of a loved one, but what makes this a wonderful production is the humour. It would be so easy to make The Lovely Bones a tale of pain of suffering, but it wouldn’t be a true portrayal of life. Despite the anguish caused by any loss – especially one as violent as Susie’s death – it is possible to laugh and love again. And without this laughter, perhaps it wouldn’t be possible to ever move on.