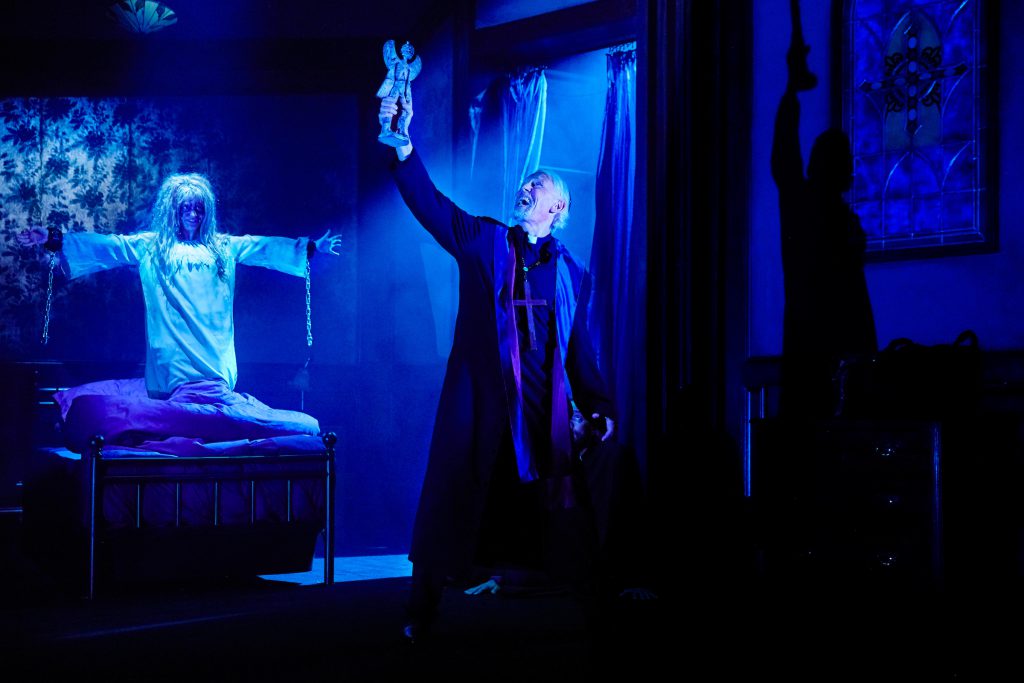 In 1971 William Peter Blatty wrote a best-selling novel based on the supposedly true events of a child possessed by the devil. He adapted his book into an award winning, yet hugely controversial feature film in 1973 and, despite multiple countries and localities banning the movie, it continues to carry a huge fan-base and is still considered by many to be one of the greatest horrors of all time. The stage production began development in 2008 through the collaborative skills of Blatty and fellow American, playwright John Pielmeier, and it eventually debuted in Los Angeles in 2012, before its UK premiere in Birmingham in 2016. A two year West End stint followed that, and this year sees its first ever UK tour.

The set grabs your attention from the moment you enter the auditorium.  It’s imposing and eerie, the nature of which effectively prepares the audience for what is to come. The innovative design utilises minimalistic and simple movements that eradicate the need for full set changes – essentially swapping between the upstairs and downstairs levels of the house where the piece is almost entirely set. There do appear to be difficulties at times with these for the stage crew/cast members operating them, but this will undoubtedly be solved on further performances.

Further special effects worked into the set itself, including the bedroom wall (which is actually an animated screen), are very clever, as are others that are used to recreate and re-imagine some of the iconic moments of the film that fans will of course be eagerly awaiting. The lighting completes the visual magic, successfully enhancing the mood and atmosphere of each scene.

The audible element of the production is equally invaluable in creating ambience and driving the reactions of the audience – well timed silences and contrasting crescendos help to shock, scare and draw the focus of those watching, while uncomfortable minor-key melodies emphasise the uneasy feelings projected to the crowd.

The focal role of Regan MacNeil is a difficult one. To portray a possessed child is a feat that very few actors will have, let alone want, to attempt in their career, however those that do find themselves in that situation, would do well to channel their inner Susannah Edgely, who is absolutely immense. Edgely superbly embodies the young, sweet girl at the start of the play, yet equally captures the evil and deranged elements of the character in her bedevilled state.

Her movement is appropriately disturbing but impossible to stop watching, and she masterfully times the mouthing of the brilliantly delivered dialogue (pre-recorded voice over courtesy of a certain Sir Ian McKellen) immaculately. She rightly steals the show and certainly gives an award-worthy performance.

Tristan Wymark clearly enjoys playing the role of Burke Dennis, and as such delivers his comically charged lines with an endearing wittiness, though it would be nice to see more moments that showcase his relationship with Edgely’s character. Paul Nicholas has a career spanning many decades and a list of credits matched by very few in the business, and as Father Merrin he gives a solid performance, hitting the dynamics required of the role. Sadly he too is not afforded as much stage time as was perhaps needed, in fact he actually only appears very briefly and as a result does not have the opportunity to develop his character or substantially impact the audience as much. Unfortunately the rest of the cast are predominantly unmemorable, and at times certain emotions were not as believable or passionate as others.

The show’s pace often doesn’t feel right, and some dialogue needs to be less rushed in order to let important content settle so that the audience is able to properly process it. There are also some moments which could be allowed more gravitas or to develop further, and alternatively occasions where content is given more thought and/or meaning than is necessary.

The Exorcist is a powerful and disturbing piece of theatre. It has translated well from screen to stage and long-standing fans will not be disappointed with how much of the original content has been kept.

Overall, this production is good, and Susannah Edgely is a virtuoso, her performance a strong reason for attending the show – however there are certainly areas which don’t meet expectations and times where it lacks finesse. Worth a watch, but not one to rush to see.