REVIEW: The Curious Incident of the Dog in the Night-Time – a moving adaptation of a remarkable novel 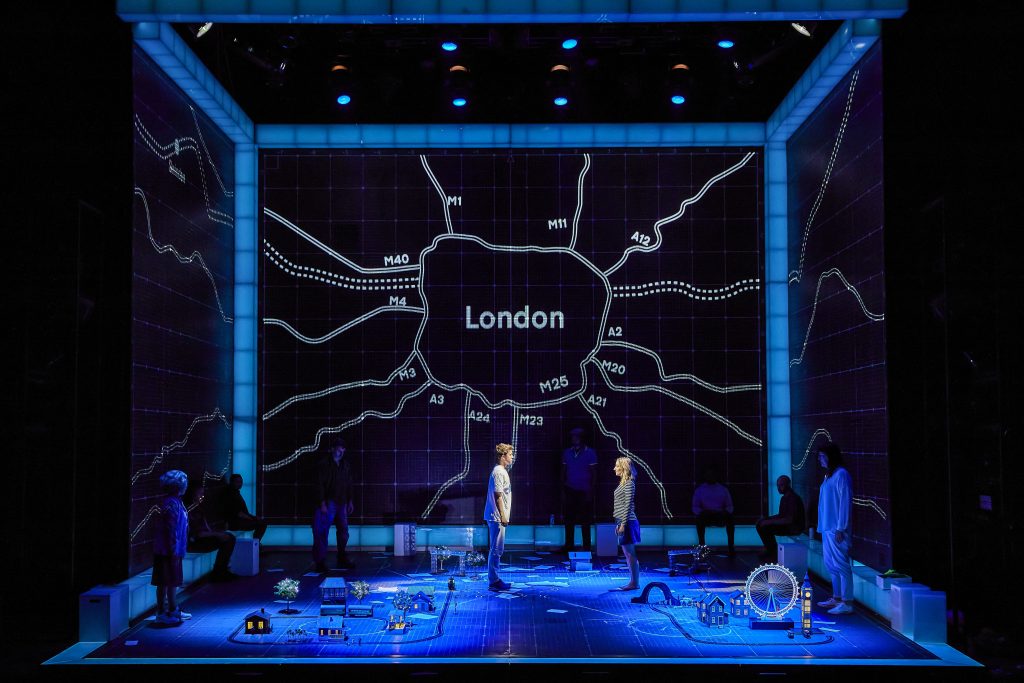 The Curious Incident of the Dog in the Night-Time. Photo credit – Brinkhoff-Moegenburg

Award-winning production The Curious Incident of the Dog in the Night-Time is back at Birmingham Hippodrome, where it will be playing until Saturday, April 2.

Based on the 2003 best-selling novel by British author Mark Haddon, the stage production premiered in 2012 at the National’s Cottesloe Theatre. It follows a series of life-changing events from the perspective of Christopher Boone (Connor Curren), a sheltered 15-year-old boy with a gift for understanding numbers and a significant impairment in his ability to understand other people. Chris likes computers, his pet rat Toby, and spending time alone. He may not seem like the most obvious protagonist of a mystery story, but it’s this uniqueness that is perhaps what has made it such a hit.

The play begins with Chris, who has a penchant for nighttime wanders, discovering the body of a dog that has been killed with a garden fork. The dog, Wellington, belonged to his neighbour, Mrs. Shears (Hannah Sinclair Robinson). Chris is deeply upset, as someone who doesn’t see the distinction between murdering a human and a dog. If there’s one thing the general British people love, it’s dogs, so even though most other facets of Chris’ personality may be unrelatable to most, it’s a strong opener.

Chris has a strong aversion to physical touch. It’s a sensory difference, a characteristic of Chris’ autism, which is central to the story due to how it leads Chris to see the world differently from everyone he meets. So, when a police officer (Kofi De-Graft -Jordan) arrives at the scene and mistakes the boy’s impairment for criminality, he ends up with a caution for assault. Despite this traumatic experience, Chris remains determined to get to the bottom of who killed Wellington, and why? Nobody seems to want him to be curious about this. The answers to his ‘investigation’ lead Chris to question everything he thinks he knows about the people he loves.

Like the source material to which it is generally faithful, the play is less interested in labels than in how Chris experiences the world; the words ‘autism’ and ‘Asperger syndrome’ are never spoken. But while Boone’s condition has been important to the marketing of the book and play, a misconception has arisen that Curious Incident was created to educate people about autism.

It’s worth clarifying that author Mark Haddon has no formal expertise on the topic. As far as the public is aware, he is not autistic, either. Nonetheless, he managed to produce a better depiction of the condition than numerous writers who profess to have carried out significant research have done.

Simon Stephens’ adaptation does not attempt to make the story into a lecture, and when narrator Siobhan (Rebecca Root), a support worker at Chris’ school, occasionally breaks the fourth wall, it’s never to teach anyone about autism. Siobhan’s narration is a departure from the novel. At first, putting Chris Boone’s words in Siobhan’s mouth seems like an odd choice, but it allows Curren to put his all into his portrayal of Chris, a role that is both mentally and physically demanding. Chris has plenty of his own dialogue too, and Curren’s ability to stay in character throughout, even when his colleagues experience minor hiccups, is impressive.

Lighting and sound effects are used extensively to convey the sensory differences that Chris experiences. While technically impressive, the bright lights and harsh noises are likely to be unpleasant for members of the audience who have sensory sensitivities of their own.

First and foremost, Curious Incident is a play for people who are ‘neurotypical’, a word used in the autism community to describe people who are not autistic. Autistic people don’t need to be subjected to sensory assault to know what it’s like to find everyday noises unbearable in their intensity. For people without such impairments, the play’s high-tech depictions of sensory overload might be a useful window into the autistic experience.

Autistic people are a small minority of theatre-goers, true. However, it’s difficult to see why a quick advance warning couldn’t be given at the start of the play, perhaps with an acknowledgment that some people may need to leave their seats during the performance and should not be reprimanded for doing so.

Another limitation of the play is that it makes little effort to adapt the story to 2022. Curious Incident was published in 2003, before smartphones, Facebook, and the economic crash. The play seems to be, too, yet references to the year make it apparent that the events depicted take place in a more contemporary context.

What is the cultural and political context Chris lives in? It’s a play with an unusually diverse cast, but questions of race and gender are left unaddressed. If this is because the social nuances of identity are lost on Chris, it’s less clear why a boy whose hobbies include using his computer is such a Luddite that he’s never heard of Google Maps. And it’s not just Chris. Apparently, no one he meets while he’s lost in London has, either!

The need for suspension of disbelief aside, Curious Incident is a moving adaptation of a remarkable novel that leaves its audiences feeling as though they have been on a real journey with Chris and his family. However, it treats autistic theatre goers’ sensory needs as an afterthought.

Runs until Saturday 02 April and on Tour