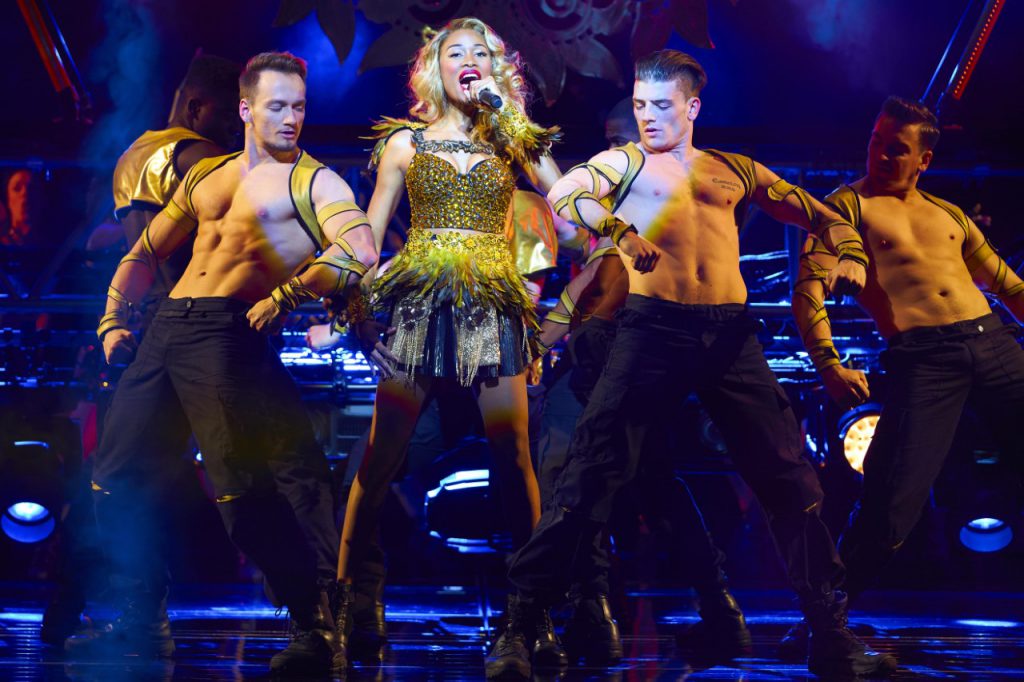 It starts with a bang and from there, the tempo, the sass and the energy do not let up – welcome to The Bodyguard. Based on the 1992 film of the same name starring a dashingly brusque Kevin Costner and the late Whitney Houston, the musical is a celebration of both the iconic film and Whitney’s diverse and extensive back catalogue.

Lawrence Kasdan’s screenplay has been slightly modified by Alexander Dinelaris’s book to make the narrative more suitable for the stage. The result is a jukebox musical in every sense which is also incredibly cheesy in places. The Bodyguard has enjoyed unparalleled success since it opened in the West End in 2012 and arrives in Wolverhampton for a two-week residency as it continues its latest tour of the UK.

Rachel Marron is a multi-Grammy award-winning artist, a global phenomenon and an Oscar nominee; she is also has a stalker problem. Her manager Bill (Peter Landi) approaches experienced bodyguard Frank Farmer (Benoît Maréchal), who avoids show business clients like the plague. Reluctantly he agrees to take charge of Rachel’s safety and is met by vehement resistance to his presence. Initially resentful of the changes he makes to her lifestyle and perceived freedom, Rachel is obstructive, rude and defiant; however, it’s not long before professional and personal lines are blurred as Rachel’s stalker continues his reign of terror.

The role of Rachel is being shared on the tour by Alexandra Burke (who starred in the production in London and on the UK tour between 2014 and 2016) and Jennlee Shallow. It’s Shallow who is in residence on press night at Wolverhampton and its safe to say she more than holds her own in the role. A little inhibited in the high tempo opening number Queen of the Night she soon hits her stride and it’s during her delivery of the power ballads that Shallow truly shines.

Shallow’s challenge cannot be underestimated. Not only is she making her UK debut, but she is also taking on a role that was originated and made famous by the incomparable diva Whitney Houston. Not only that, the character of Rachel Marron has been brought to life by established stage and screen stalwarts including Beverley Knight and Alexandra Burke. She steps up with composure, self-assurance and class delivering number after number with an incredible amount of heart, soul and outstanding vocal placement. She embodies Rachel perfectly; initially brash and nonchalant; Shallow delivers Rachel’s character development with a believable authenticity. She ends both acts with incredible emotional energy; at the end of the first with I Have Nothing and when closing the show with the iconic I Will Always Love You.

Benoît Maréchal is assured as the uptight protector Frank. A French native (who starred in the French version of the show) has an unusual hybrid accent, which at first is strange but actually gives Frank a slightly different edge. Rachel’s stalker, played by Phil Atkinson is a major departure from his film counterpart, extremely muscular and physically appealing; he produces a spine-tingly menacing turn as the crazed fan. Micha Richardson is endearing as Rachel’s long-suffering sister Nicki, who not only has to live in the shadow of her successful and famous sister but finds herself pining (unrequitedly) for Frank.

Tim Hatley’s sliding set and stage design is impressive and takes the audience from highly intimate moments to believable club/concert scenes. It is an incredible use of space and the scene changes are incredibly subtle yet highly impactful. Mark Henderson’s lighting design is complemented by the video design of Duncan McLean, the combination of which makes the Grand’s stage (at times) seem significantly bigger than it is.

If you are looking for a show with incredible vocals, a good story and some iconic numbers then look no further than The Bodyguard. The show is and continues to be a wonderful tribute and immortalisation of a beloved movie and a celebration of an incredibly gifted artist who was taken far too soon.