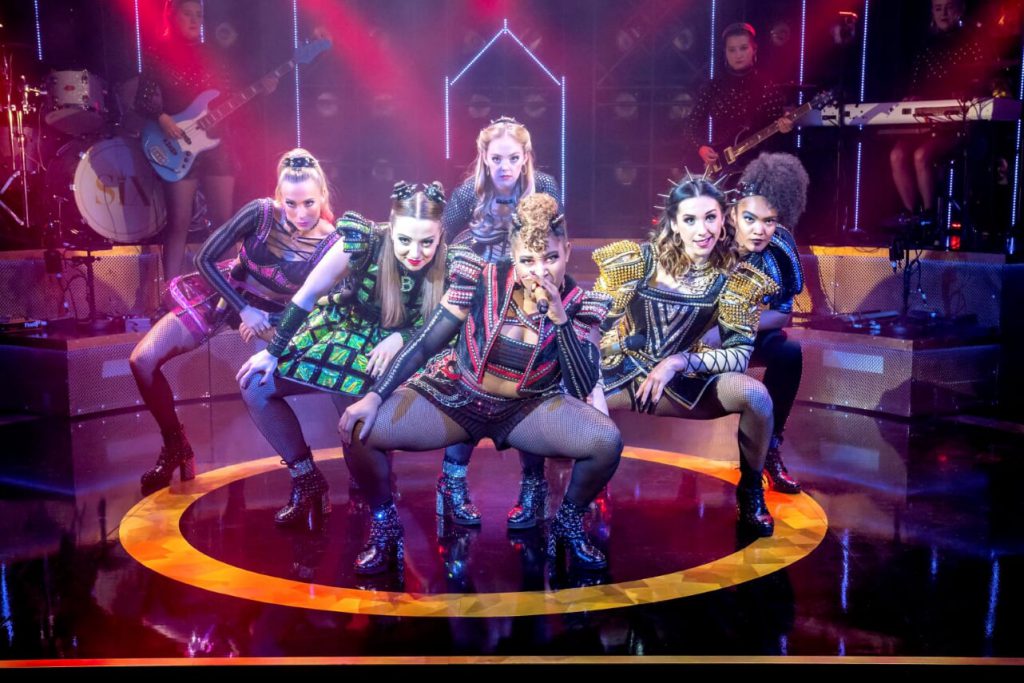 Arguably one of the most famous groups of women in history, Henry VIII’s wives have been the subject of countless TV biopics, school projects, and non-fiction books. You’d struggle to find someone who wouldn’t utter the rhyme “Divorced, Beheaded, Died; Divorced, Beheaded, Survived” on hearing the mention of that particular Tudor monarch, and that his wives totaled 6 in number, is a fact that even the youngest of students fail to recollect. That said, the majority of the general public would struggle to name most of the women, let alone give any information about them beyond their cause of demise. So, to create a musical about them, and in turn, make it successful, is an interesting idea that few would have perhaps had much faith in. Fortunately, though faith there was, and successful it certainly is.

SIX is the famous historical tale, told from the perspective of Henry VIII’s six wives. The audience is introduced to the queens as though they are a pop group, each with their own energy and style. The concert-like feel of the opening also allows the performers to break the fourth wall, immediately immersing the crowd and completely removing the theatrical atmosphere. The show’s premise is that of a competition – the wives all want to be ‘crowned’ the winner of the most suffering wife and aim to win that title by singing about their trials, tribulations and final outcome at the hands of the king, each wife having a solo number to argue her case with a couple of group songs tying the whole piece together.

The composition works brilliantly, the pace dictates a constant interest in what is going on and never allows the energy (on stage or off) to drop. The exceptional writing of Toby Marlow and Lucy Moss takes modern language and strong attitudes and egos, combine them with accurate (and embellished) historical facts, and unites it all with lyrical brilliance, resulting in a fabulous musical.

The direction is also superb, it is clear to see that Lucy Moss and Jamie Armitage are very much in sync with each other as well as musical director Arlene McNaught, and together they have created a perfect atmosphere for the six women to adopt while also allowing them the freedom to add individuality to their own performances.

It is impossible to single out one of the Queens as their true genius is in their chemistry. Each of the six women (Lauren Drew as Catherine of Aragon, Maddison Bulleyment as Anne Boleyn, Lauren Byrne as Jane Seymour, Shekinah McFarlane as Anna of Cleves, Jodie Steele as Katherine Howard, and Athena Collins as Catherine Parr) is undeniably hugely talented, but the way they work together and create relationships while still exhibiting personal traits is the key to this piece.

The music is stunning, outstanding vocals are showcased in individual numbers (with Heart of Stone and All You Wanna Do standing out as particularly incredible solos), amazing harmonies are never missed in the group songs, and the on-stage band (all ladies too, which is a great touch) are equally excellent.

The dancing too is of the highest standard, again all of the women are perfectly in sync and the routines from choreographer Carrie-Anne Ingrouille are varied and exciting to watch. Add in a simple yet effective set, some very cool costumes and it really is the whole package.

SIX is a powerhouse of music, dance, and camaraderie. Modern musicals quite often promote important messages about things such as equality (or the lack thereof), discrimination and old-fashioned views and beliefs. SIX manages to do this is in a subtle yet welcome and enjoyable way, reminding us that although the Queens are remembered for the common factor of their ex-husband, they had individuality and were justifiably famous and memorable in their own right.

It is easy to see why this show is so popular with the female teenagers and their peers in this modern age of female empowerment – however, it certainly doesn’t pigeon-hole itself purely to that demographic. Regardless of age, gender and background, all will enjoy SIX, so catch it before it ends.