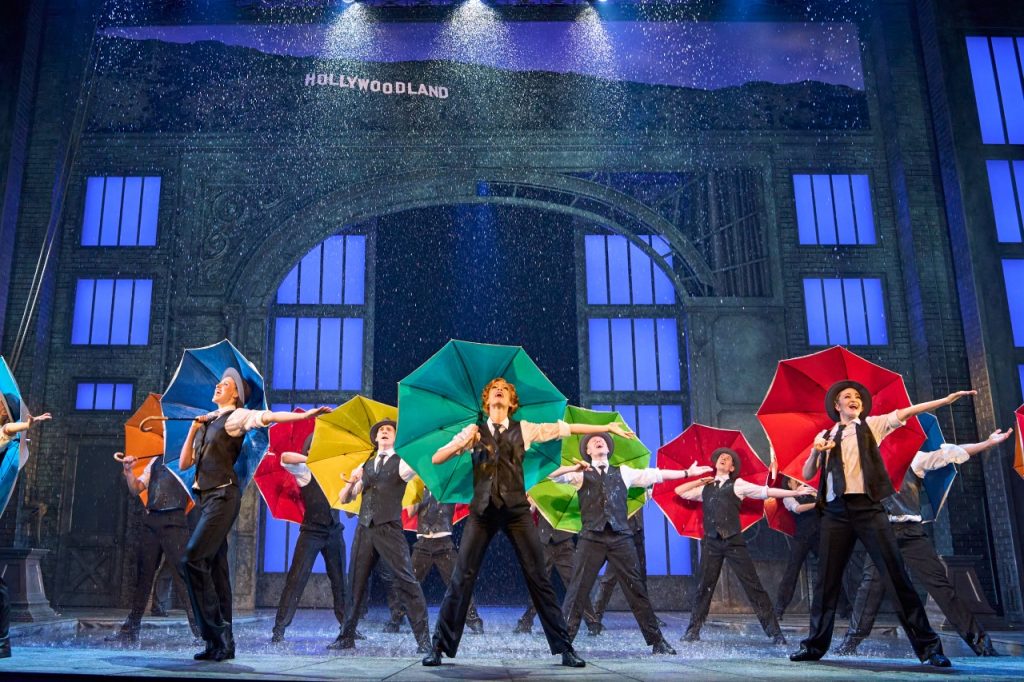 The Singin’ in the Rain company

Singin’ in the Rain oddly doesn’t feature that much rain, or that much singing, for a musical anyway.

Based on the classic Metro-Goldwyn-Mayer film, Singin’ in the Rain features the famous song of the same title, along with the equally successful track ‘Good Morning’ which are some of the only memorable moments of this musical. This musical is widely seen as a classic, having been a hit from its film inception in 1952, though it arguably lacks the ‘oomph of other’ classics.

The production details the development from silent pictures to a screen musical, showing how the industry changed and adapted to work with technology and keep up with the times. Perhaps the musical could take a leaf out of the story’s book. Whilst the (two) scenes where the actors dance in the rain are an interesting watch, the only things memorable are the fact it was real water and that the lead dropped his umbrella.

Not every show needs elaborate sets, tech effects or over-the-top ballad numbers, but this musical needs something. The set is simple and bland, presumably to ensure the water scene works, but some clothing rails and benches are not enough to set a scene. The storyline also feels problematic and seems to change constantly. Is it a musical about making a musical, is it a love story, is it a dance recital? That is unclear.

Some people may enjoy large dance breaks and instrumentals, that is down to personal preference, but overall the musical feels a lot more like a dance recital than a musical with the dance numbers fragmenting the show instead of bringing it together. In a few scenes, the audience gets sucked into the action for a moment, only to be torn out by a random tap number that serves no purpose. Even the actors exclaim “tap dancing, we’ve gotta have tap dancing!” which feels like how this musical was created.

Having lots of dance numbers doesn’t automatically mean a bad show, just look at West Side Story, which has huge dance breaks, but they still add to the story instead of taking away from it. The ratio of singing, dancing, and dialogue in Singin’ in the Rain may be like West Side Story, but the latter musical is infinitely more enjoyable.

Although the show is entirely unremarkable, there are some redeeming factors. Namely, Ross McLaren as Cosmo Brown and Charlotte Gooch as Kathy Seldon. McLaren’s Cosmo is the star of the show. Cosmo is portrayed as the best friend everyone needs, brutally honest yet ridiculously silly, and always supportive. His infectious joy is welcome in an otherwise drab production. Every single high point of the show has a direct correlation to McLaren, from the hilarious track ‘Make ‘Em Laugh’ to the upbeat ‘Moses Supposes’ he is the shining star on this stormy night.

Gooch’s Kathy Seldon is the no-nonsense cynic that is needed to balance the egotistical Don Lockwood and bring him down a peg. Not only is she a phenomenal singer and dancer, but she also has the stage presence and light-hearted air about her that allows her to feed off Cosmo’s relentless energy. In some scenes, Cosmo and Kathy have more of a connection than Don Lockwood and Kathy.

Whilst the whole point of Faye Tozer’s Lina Lamont is to be an annoying self-absorbed diva, the voice was entirely too much and hard to follow. As said in the production, Lina Lamont’s voice will bring back silent movies. Faye Tozer takes method acting to a whole new level, it’s hard to realise it is actually her unless you look at the programme, it’s a shame that her real singing talent is not given a chance to shine.

The true heroes of this production are the crew who make sure that everything is safe between scenes, especially after the big water numbers when things can get dangerous. They rightfully get applause during the interval as they finish mopping up the stage. They are truly unsung heroes.

This production stays at Milton Keynes until 16th April 2022 before continuing on tour.