REVIEW: Showstopper! The Improvised Musical! A potato in the dark and an over-sharpened leg 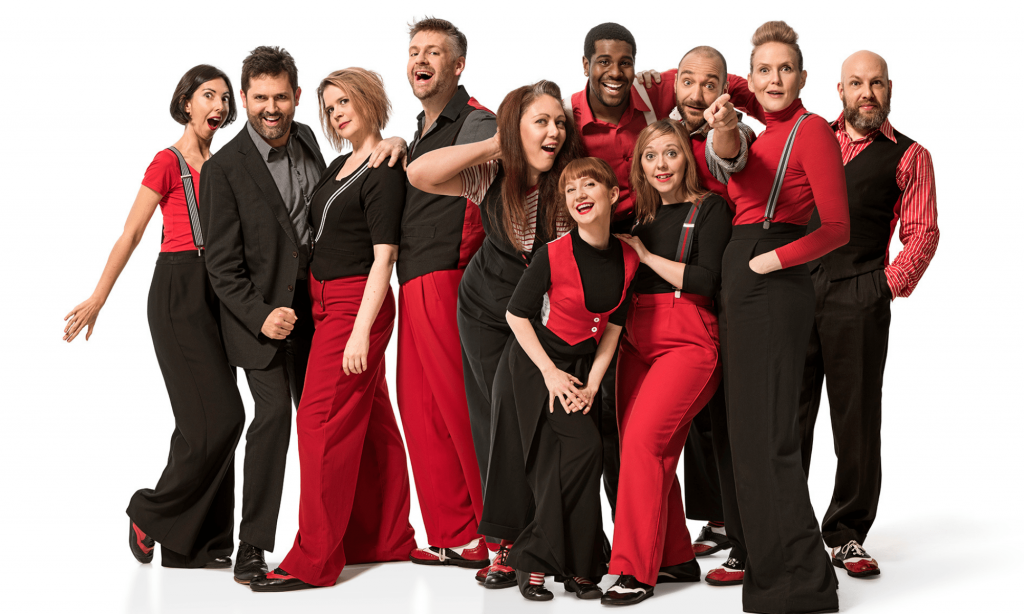 The Showstoppers – Photo by Hugo Glendinning

Heading into an improvised musical with no cast list or background information is certainly daunting but ultimately, insanely worth it. Showstopper! The Improvised Musical! Is back in the West end as it takes up a limited residency at the recently vacated Lyric Theatre. With performances monthly until March next year, there are limited opportunities to witness these innovative, improvised musical extravaganzas. These guys already have an Olivier Award to their name and are genuine trailblazers in the world of improvised comedy. Every show is unique and with audience participation encouraged, the Showstoppers are ready and waiting to adapt to all the twists and turns thrown at them.

Recently, there has been furor amongst the theatre community and avid theatre goers about etiquette and audience behaviour. Yet, where shows (such as these) actively encourage the participation, that energy is gorgeously translated to the stage. Writer/moderator Dylan Emery begins the show by encouraging the audience to shout out ideas for the cast to transform them into the brand-new West End hit. This raucous and willing Press Night audience were up to the task landing on Pirates and Mermaids with music in the styles of SIX, The Book of Mormon, and A Chorus Line, hilariously titled Who do you think you arrrrrr?

Within minutes, the band, and performers spring into action, performing sea shanties and bold ballads about life on the sea with such passion and vigour that you would never have guessed they were only just given the theme. Pippa Evans served as Captain Abernathy, guiding his ship the Black Toad towards the isle of Tortuga, an island that he couldn’t even pronounce properly. Other cast members took this pronunciation fumble and ran with it, all pronouncing the island’s name differently throughout the show. The simplicity of this became hilariously unhinged throughout the show as the pronunciations became worse and worse.

The mermaids were portrayed as seductive mistresses with fringed scarfs over the top of their pirate getup and their bold pirate drawl transformed to sultry southern accents to help aid the transition. Each cast member flitted between hard sea-worn pirates to irresistible mermaids instantly, their talent was truly unmatched and made any random prop into a key story piece. One cast member who truly put their all into both their Pirate and Mermaid characters was Ruth Bratt, playing a hilarious chef Blanche and irresistible temptress Marybell.

One of the props used to the best of its ability was a red foam baseball bat, seemingly boring, yet it transformed from a podcast mic, to a pirate’s sword, to even a wooden leg. In fact, Pirate Skippy, portrayed by Andrew Pugsley, even had a whole catalogue of wooden legs. One that he spent most of the show sharpening, a bejewelled leg known as his ‘sexy leg’ and the one with a bomb in it.

If this sounds bonkers, that’s because it is. But in the best way.

Throughout the entire show, all cast members poked jabs at reality, from comments about podcasts and Instagram, to the brutal cancel culture that led to Skippy walking the plank.

The purposefully slapdash costumes and slapstick comedy made the crowd insatiable to the comedy onstage. Especially when it became their decision to choose key points in the story, each audience decision unraveling what sanity the performers had left. For example, having poor Joshua Jackson struggle through Russian and Birmingham accents on short notice. Amongst all the jabs and jokes, it must be highlighted that every single member of the group is also a sensational vocalist, something that really shouldn’t be overlooked.

This show is truly hard to explain, and hard to review, as every night is a completely unique experience. It is quite sad that the world will never hear the three-way Hamilton style love triangle, or the SIX-inspired revenge song.

One song stole the whole show, though, and that was the opening number of the Second Act. This served to cultivate the backstory of the bloodthirsty mermaids in the musical style of the Spice Girls. A phenomenally clever and hilarious concept. The murderous mermaids set off Act Two with synchronised dancing to the words “slam their body down and cut ‘em by the throat”. (Must be read in the tune of Wannabe).

If you are looking for a fun evening, then Showstopper! Is a must-see, one of your suggested plot points might even be chosen. Just make sure not to make the cast on stage suffer too much, unlike the Press Night audience who made two poor cast members perform in iambic pentameter for an entire track.

The show ends as frenzied as it begins, with proposals, men going overboard, Javert-style, and even a potato gun. Oh, and the bomb in the wooden leg. A wild ride of truly improvised musical comedy delivered by an insanely talented and accomplished cast – a must-see.