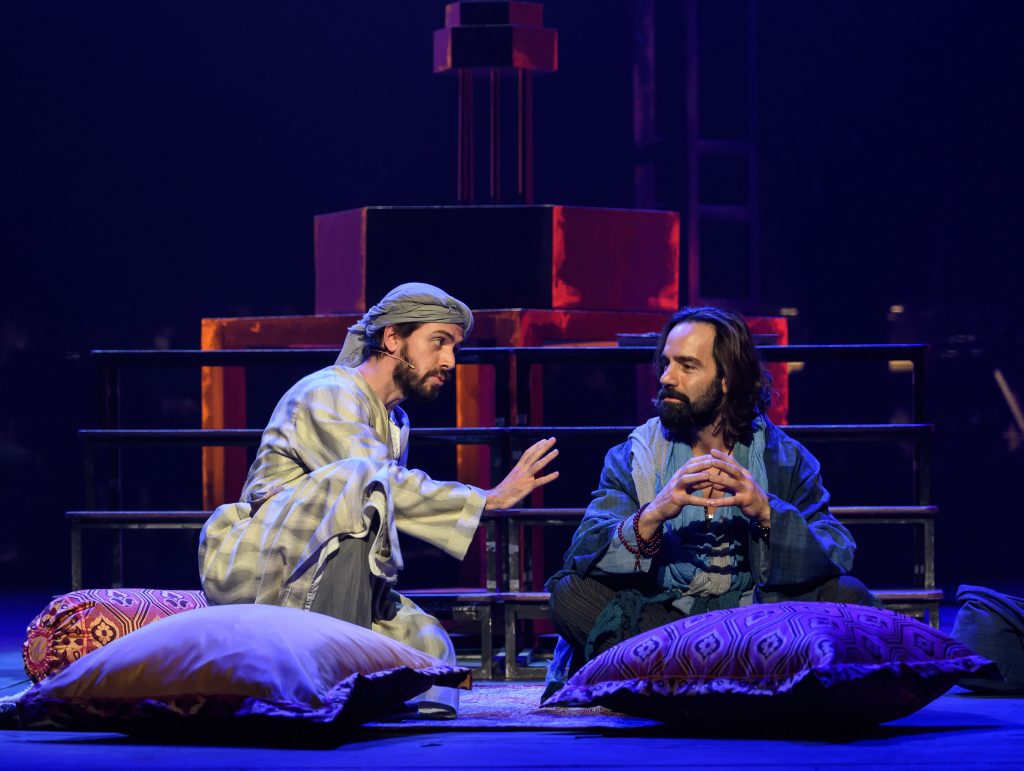 The choice to adapt the life of a 13th-century philosopher and poet into a musical may seem somewhat strange. However, Rumi, is not just any poet. His influence has transcended borders, religion, conflict, and time, touching millions around the world. His spiritual legacy continues to endure eight centuries later. Rumi has inspired all nationalities, ages, faiths, and backgrounds and now, thanks to Dana Al Fardan and Nadim Naaman his story becomes mainstream as it hits the West End stage.

Rumi: The Musical charts the poet’s determinative relationship with his mentor Shams Tabrizi; the primary storyline is intertwined with other sub-plots, including how his development as a philosopher impacted his relationships with his children, wife, and followers. If you are unfamiliar with the works of Rumi, then fully expect it to take a few numbers to fully grasp the story. That said, any unfamiliarity certainly doesn’t detract from the quality and impact of the musical. In fact, the wider benefit of the sub-plots allows other characters to come to the fore, providing broader investment and character development outside of Rumi himself.

The music, courtesy of Joe Davison, is phenomenal. The 29-piece orchestra beautifully performs Davison’s orchestrations and arrangements, transporting audiences to Konya, the shows setting. Nikki Davison’s vocal arrangements are exorbitantly powerful, with the clever lyrics delivered and performed by a wildly talented cast full of vocal prowess. This literal music to the ears ensures that Rumi pays homage and respect to both the characters in the show and to the Middle East in the most perfect way.

It’s impossible to single out standout performances amongst the cast, the immense talent on show means that every member of the company is incredible in their own right. Nadim Naaman and Ramin Karimloo lead proceedings as Rumi and Shams, with the two nothing short of stellar in their roles. The pair have been performing iconic roles for years, and their experience shines through here. Through their strong and smooth vocals, combined with raw acting, they bring a genuine sincerity to these characters.

Soophia Foroughi, Casey Al-Shaqsy, and Ahmed Hamad complete the Rumi family. All three bring complexities and depths to their characters in authentic and believable ways. This is unavoidable as their characters go through profound changes thanks to the newfound bond between Rumi and Shams. Casey Al-Shaqsy and Ahmed Hamad portray two young lovers, Kimya and Aladdin. Their relationship is delivered in such an incredibly heart-warming way that it’s hard not to empathise with them. There is a very poignant moment later in their relationship, which the show depicts both respectfully and sensitively. Accompanied by Al-Shaqsy’s stunning vocals, this moment is sure to bring a tear to the eye and a lump to the throat.

The ensemble provides strong vocals in the powerful group numbers, such as ‘Don’t’, ‘Behold the Golden Sun’, and the ‘Finale’. All continue to shine by as they showcase their dance talents. Anjali Mehra and Mark Samaras’ choreography is creative, unique, and elegant.

Similarly, Gregor Donnelly has designed equally creative, unique, and vibrant costumes which are as much a feast for the eyes as the rest of the show. What is remarkable about Rumi, is every single component part is stunning in every sense of the word. All come together to create a visual and auditory feast with every intricate detail so well-thought-out, delivering mini spectacles within a larger extravaganza.

This is a truly gorgeous musical. The committed cast maintains the momentum and energy from the first to the final note. This, combined with songs and music that are sure to linger in minds after the curtain has come down, makes Rumi a captivating production.

Rumi must be congratulated for truly paving the way regarding representation. The number of conversations within the industry is untold, with the demand for better representation becoming deafening across the board. Rumi has not only listened to the demand, but it has also delivered it in abundance.

Naaman has not only brought a Middle Eastern story to the West End but it has also been created and performed by those who represent the region he was from. All cast and creatives are made up of MENSA (Middle Eastern, Northern African, South Asian) heritage people. A first for the West End means that Rumi has not only made its world premiere, but it has made history and truly led by example.

Rumi is wholeheartedly unforgettable, paying homage to its origins in the best possible way. It will be a joy to see Al Fardan and Naaman, continue to bring figures from the arts and literacy scenes of the Middle East to the West End, something that has been long overdue. Not only are they dispelling stereotypes, but they are also blazing a trail for true and authentic representation in theatre. You only need to look at the richly diverse Coliseum audience. Accurate casting will influence and promote diverse audiences and accessibility, and this example must be followed. Everyone involved with this production deserves huge plaudits.

With only two shows planned (and one remaining) Rumi: The Musical would be a joyous addition to the West End and this show deserves a return and a longer run.