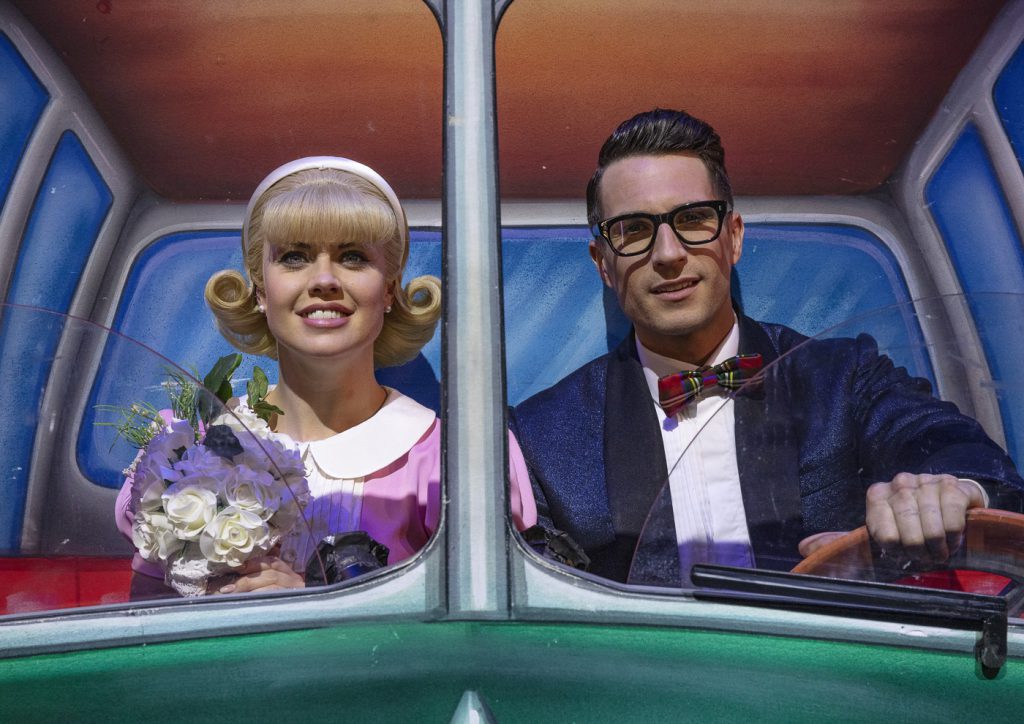 Since the smash-hit 1975 film, it’s been difficult for any actor to really put their own stamp on the characters in Richard O’Brien’s insane show. In fact, the show would not have the same draw to audiences around the working without the at the timeless classics, including the pelvic-thrusting ‘Time Warp’. It would be wonderful to treat the audience to a little reinvention of the show, but maybe even the loyalist of fans would shy away from too much of a deviation from the original.

Laura Harrison’s Usherette opens the show, setting the atmosphere of the piece with ‘Science Fiction, Double Feature’. She goes for comedy; she sells the sexiness of the show and she has a good time. Which is, quite simply, the Rocky Horror Show in a nutshell.

Joanne Clifton and James Darch play sweethearts Janet and Brad, both with dreamy vocals, caught with a flat tyre in a storm. Fortunately a mansion stands nearby and the two lovebirds are able to shelter from the rain. This house belongs to the stand out of The Rocky Horror Show – the main antagonist. Stephen Webb’s Frank-N-Furter is no exception to this rule. His performance of ‘Sweet Transvestite’ is slick (it’s no wonder his performance receives the loudest cheer of the evening), and his emotion is raw during some of the slower numbers in act two.

Kristian Lavercombe brings a familiarity to this production, having played Riff Raff in over 1500 shows all over the world. His ‘Time Warp’ is effortless and charming, with an edge like no other version of the song. Ross Chisari’s cameo as Eddie is entertaining with a crowd-pleasing ‘Hot Patootie – Bless My Soul’ although his character is lost on the greener audience members. Chisari returns in the second act as Dr. Scott in yet another bizarre – and unnecessary – twist in the production. The Narrator (Philip Franks) has a great rapport with the audience, particularly the seasoned Rocky Horror fans. The back-and-forth is very ‘adult panto’ and a newcomer may be a little taken aback by how well this show is known and loved by so many people.

The high-energy songs have strong choreography by Nathan M Wright, only amplified by the dancing talent of Joanne Clifton and the gymnastics brought by Callum Evans, the blonde-haired and tanned monster created by Frank-N-Furter.

While the plot loses direction a little (or a lot) during act two and doesn’t wrap up neatly, it’s fair to say that the cast keep the show alive. It’s their stage presence and energy that makes the Rocky Horror Show something special. And with a run time of just two hours, the slight loss of direction can be forgiven.

A night at the Rocky Horror Show is outrageously funny. It’s saucy, it’s sexy and it’s a whirlwind of a night at the theatre. This show may be a bit marmite – but if you love it, you’ll really love it.

Perhaps the light over at the Frankenstein place will entice you to see this much-loved musical at Wolverhampton Grand Theatre this week. And if the light doesn’t persuade you, maybe the promise of an audience-wise Time Warp just might.