REVIEW: Reputation – A hidden gem of a show bursting with nostalgia 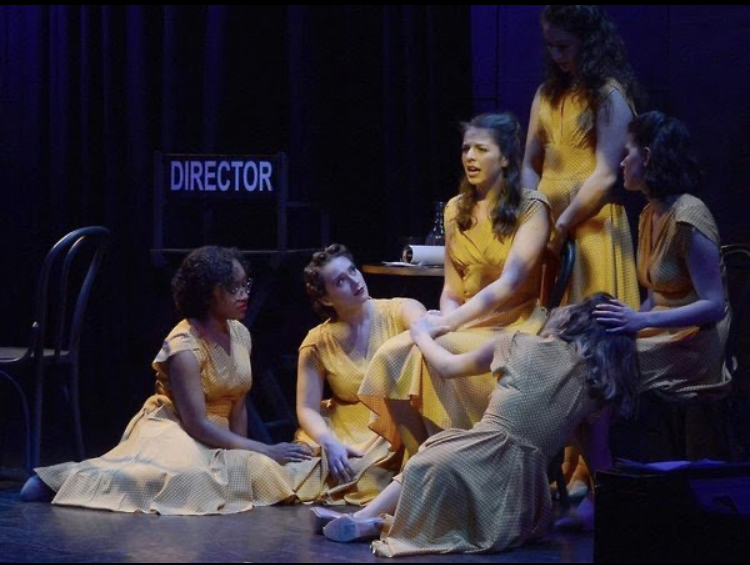 Maddy Banks and the cast of Reputation – Photo Credit: Donato

Venue: The Other Palace Theatre, London

Think back to the golden age of musicals. Soprano love ballads, chorus girls with huge smiles dancing in perfect synchronisation, an easy to follow plot and a very clear villain. That feeling of nostalgia is exactly what is presented throughout Reputation, a new musical presented by Alick Glass, which is currently enjoying its world premiere at The Other Palace in London.

The musical, set in 1935, revolves around an aspiring author – Michelle Grant (Maddy Banks) – who sees an advertisement looking for a film script, and when she sends her work away, realises she has been scammed by the crook in the show – Freddy Larceny (Jeremy Secomb), who is passing her work off as his own. The show charts Michelle’s fight to have the work recognised as her own. The show follows a simple and clear format and although slow in places, is engaging throughout with songs coming frequently enough to ensure that the narrative never stagnates.

There is a feeling of nostalgia throughout the performance which is created in the main due to the music. There is a classical, stripped back feel with only a piano and double bass being used. That, combined with the harmonies which are as beautiful as the lyrics themselves, ensure the music fits in perfectly with the time period setting. The numbers stand out for all the right reasons with the music being arguably the most memorable component of the show as a whole.

From start to finish, the cast maintains a high level of energy, with the whole ensemble cast on stage for 90% of the show. The actors rarely leave the stage, truly showcasing their stamina. Jeremy Secomb in the role of Freddy Larceny is just fantastic. He commands the stage and completely embodies the villainous and crooked character of Freddy. While the set and lighting may be minimalistic, the enthusiasm from every cast member more than makes up for this and as a result, it’s easy to become invested in every single character.

Warren Wills is solid in his direction; however, the show does seem to be confused about how it presents itself. With very over the top acting through facial expressions, movements and speech, it is hard to ascertain the motivation behind this directorial decision. It may be motivated by the time period in which the show is based, mirroring the golden age of musicals, or even because the show is deliberately satirising the over dramatisation of musicals as a whole. That said, Wills’ directional choices work in the main and appear to have the desired comic effect. Although, in a few scenes it can be taken a bit too far with the scene ending with a slight am-dram feel.

The show itself takes audiences on a journey, starting with Freddy setting the scene, and then seeing Michelle finish and send off her work, all the way through the fight to have her work recognised as her own. There is a genuine believable transformation as Michelle changes from a young teenage girl into a strong woman as the show, and time progresses.

Reputation in itself is a hidden gem of a show that maybe just getting started. Completely different to anything else currently running in the West End, the show may not be perfectly polished and the plot may not be life-changing, but it is worth visiting for the nostalgia of old school musicals and the incredible music and songs that will be stuck in your mind long after the show has ended.