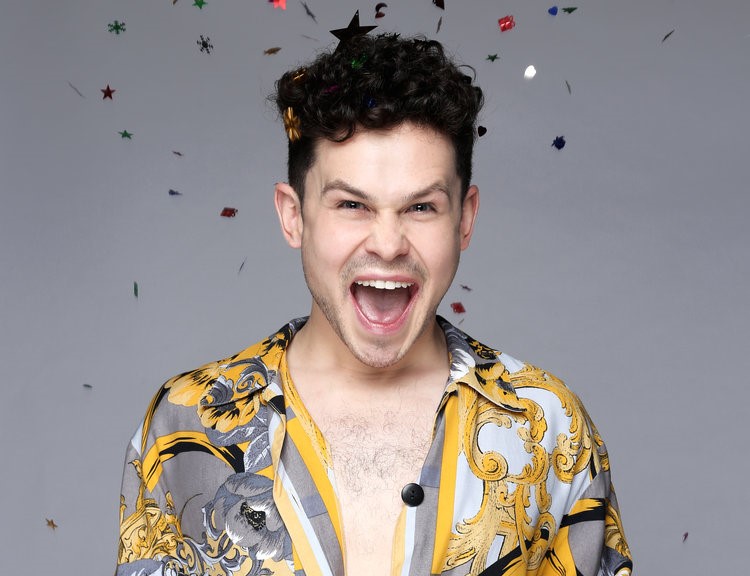 Venue: The Cage at The VAULT Festival – London

Moss plays Harry Ledgerman, a musical theatre star who, in the throes of a mental breakdown decides now is the perfect time to revamp his career. The show is based around the launch of his memoir, Quadruple Threat. The book launch is used as a vehicle to introduce a mixture of larger than life characters, all hilariously played by Moss. Plant your tongue firmly in your cheek for this satirical look making it big in showbiz, delivered with an exorbitant level of comedy.

There is a clever mixture of both acting performance and sections of the show where nothing is happening on stage but instead, audiences can hear radio interviews. Despite having nothing to see during these scenes, the dialogue is cleverly scripted, engaging and maintains the humour of the show high. The pace remains constant ensuring that the comedy is not diluted through the change in medium.

Quadruple Thre4t is over the top, camp and ridiculous, but in the best possible way. The piece feels like it was made with actors in mind and feels like a show just for them. Moss takes every stereotype of an actor, heightens, exaggerates it and portrays it openly and honestly. The mannerisms, the rush to show off the triple threat talent actors have and the dramatically bursting into song every two minutes to convey the emotion he is feeling at one given time.

The set is basic, but for this performance and production, it works perfectly. A large and lavish set would only take away from the performance itself. Moss uses all the space available and is never in one spot for too long. The stripped-back nature means that the focus is entirely on him and his words and acting.

When performing a solo show, it is always a challenging feat to engage, capture and maintain the pace, style and audience attention. This is something Moss handles excellently, and it is hard to take your eyes off him; with the change of characters happening quickly and the show moving at pace, it’s never possible to rest on your laurels and get comfortable.

The piece is wonderfully unpredictable with Moss taking the narrative down some fabulously zany avenues, all delivered with a magnetic level of enthusiasm and energy. It’s nigh on impossible not love everything he does. Whilst this show may not be life-changing, it allows for 50 minutes of pure unadulterated laugh-out-loud laughter and escapism.

You may have missed Quadruple Thre4t this time around (it only played over one weekend at this festival) but it’s hard to envisage this sharp and infectious piece not having a much longer life. Moss is certainly one to watch.