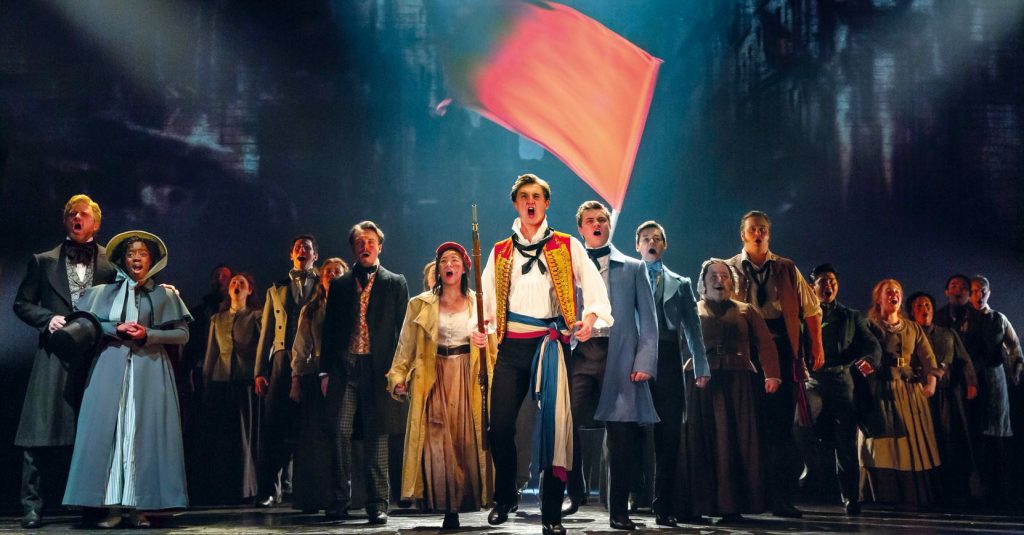 There are few musicals that truly stand the test of time, certainly not those who enjoy continued and unadulterated success. Les Misérables is one such musical. Still a stalwart of the West end, the show is now packing out regional theatres on its current UK tour.

Based on the 1862 novel by Victor Hugo, Les Mis centres around convict Jean Valjean who, after stealing a loaf of bread to feed his starving nephew, is sentenced to 19 years in prison under the iron fist of prison guard Javert. Having received parole, Valjean reverts to his thieving ways but is offered redemption by a kindly bishop. Fast-forward eight years and Valjean has changed his ways, become mayor of Montreuil-sur-Mer and a stand-up member of society.

The plot of Les Mis is complex and multi-faceted, with several subplots and fringe characters. However, it’s Valjean’s encounter with the fated Fantine which forms the basis of the story and sets in motion a chain of events that spans several decades.

Will Barratt steps into the role of Jean Valjean in the absence of Dean Chisnall with all the authority, command, and presence you would expect for such an iconic character. Barratt owns the stage and delivers Valjean’s arc with effortless flair, and palpable emotion. Nic Greenshields Javert is imposing and authoritative and he plays the conflicted lawman with unending class and poise. His vocals are astonishing, and his physicality serves to make the character more menacing and imposing. The two play off each other wonderfully in a never-ending game of cat and mouse, a game that spans the entire show.

Katie Hall is a fine Fantine. She articulates the character’s hopelessness and ultimate demise with a believable and authentic performance. I Dreamed a Dream is possibly one of the most iconic musical numbers in existence, and Hall delivers it with gusto, emotion, and class. It remains as it always has, a sucker punch to the emotions of even the harshest of critics.

Fantine’s daughter Cosette is played as an adult by the glorious Paige Blankson. Her operatic vocals, are one of the highlights of the show. Blankson is complemented in droves by Will Callan as Marius. Their chemistry is believable as their relationship builds to the backdrop of the French Revolution.

Les Mis is blessed with a multitude of rich characters and a large cast. Ian Hughes and Helen Walsh excel as the despicable Thénardier’s. Having conned Fantine into entrusting a young Cosette to them, they abuse and exploit her whilst encouraging their own daughter, Éponine to mirror their actions. Hughes is captivating as Thénardier, delivering an incarnation of the crook which feels like a blend of Joe Exotic and Fagin. He’s small and nimble, which contrasts beautifully with his buxom and intimidating wife. Master of the House is a fine sequence and really showcases the pedigree on stage.

Samuel Wyn-Morris puts in an authoritative turn as revolutionary Enjolras. His vocals are smooth and it’s not difficult to buy into his passion as he rouses his comrades as they man the barricades.

However, the vocal performance of the night must go to Nathania Ong as the doomed Éponine. Crippled by her unrequited love for Marius, she breaks free from the shackles of her unfortunate parentage, achieving ultimate redemption. Her performance of the iconic On My Own is spine-tingling, beautiful and delivered with a tear-jerking dollop of raw emotion.

Les Mis is a lengthy affair and the cast work incredibly hard. The choreography is complex, and the wider ensemble has unlimited levels of energy, making the movement look easy. Matt Kinley’s set is incredibly intricate, with every detail thought through. The battle scenes of Act 2 are particularly effective, and the various video projections maximise the emersion. We may have lost the revolving stage, but it’s not detrimental in any way.

The length of the piece is somewhat to the detriment of the production, as there is literally so much packed into the narrative. We don’t see any of Fantine’s backstory, which means that we don’t empathise with her as much as we should. Her journey is truly heart-breaking, and unfortunately, the musical does dilute that. Additionally, the pace feels just that bit too fast with the cast whizzing through the numbers, scarcely taking a breath.

That said, it can’t be denied that Les Mis remains one of the most iconic musicals of all time. It’s stirring, empowering, heart-breaking, and rousing, and it’s unsurprising that it continues to stand the test of time. It might not be the most cheerful of musicals, but it’s a wonderful story of redemption, benevolence, love, and compassion. Claude-Michel Schönberg’s music and book will undoubtedly continue to inspire and enchant audiences for years to come.

For those unable to get to London, Les Mis is in residence at Milton Keynes until Saturday 21 May 2022.