REVIEW: La Cage aux Folles [The Play] – Despite not being as strong as it’s musical or film counterparts, it remains a story that celebrates individuality & acceptance 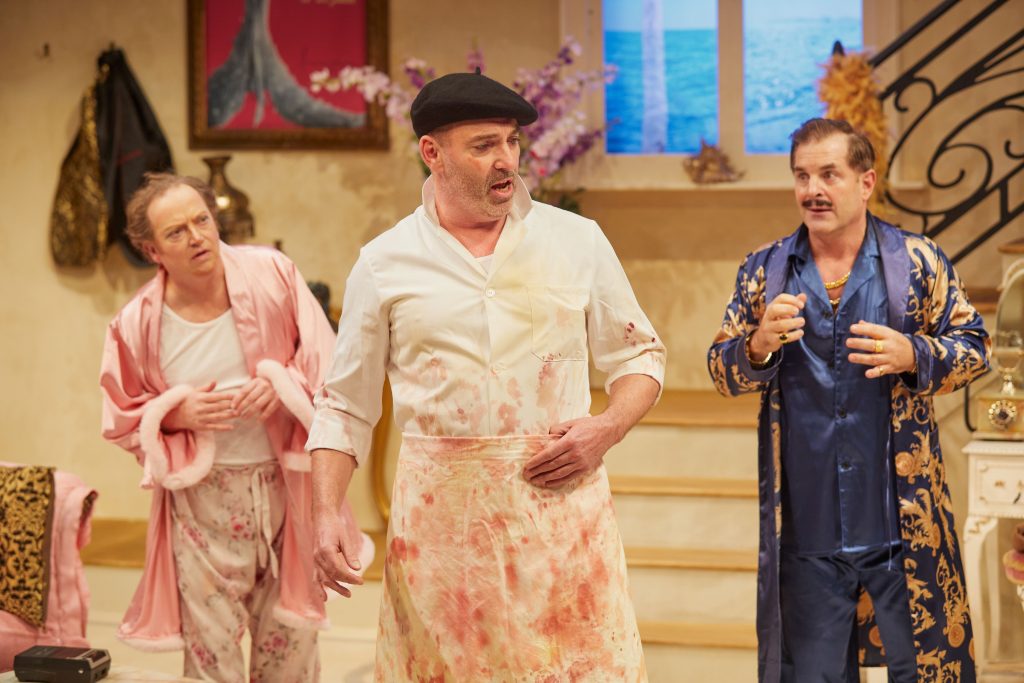 The comedic farce that led to four blockbuster films and a hit musical is now back in London. Making the English Language world premiere, Simon Callow presents a new translation of La Cage aux Folles [The Play] which is currently running at the Park Theatre.

The play centres around Georges, a gay man who runs a drag queen nightclub who learns that his son is getting married to a woman whose parents are deeply politically right-wing. The show presents the chaos as Georges must prepare to host the family whilst keeping his flamboyant lifestyle under wraps.

The show gives a snippet into what life would have been like for a gay man in a previous time period. However, in this current generation when LGBT+ are fighting for acceptance, the running theme of hiding one’s true personality and adapting a lifestyle to please others and fit into what society deems acceptable feels dated.

This is echoed by the acting choices made by those portraying the drag queens and gay characters within the show, seeming to just adapt LGBT+ stereotypes and overdramatise them for comedic purposes. Following this, a scene which concludes act one displays Georges trying to help his partner, Albin, played by Paul Hunter, behave in a more conservative way and hiding his sexuality. The scenes are important for the plot, and may even be a deliberate intention as directed by Jez Bond for audiences to question whether these themes within the context are still relevant today, however, witnessing them being performed felt somewhat uncomfortable to watch.

The show’s comedy seems to rely on overdramatic. Big melodramatic voices and overdramatic acting choices, movement and facial expressions, while funny at first, become tedious and watching this ordeal starts to feel closer to pantomime as opposed to a comedic play.

Following this, manic chaos seems to be the appropriate phrasing for this show. From start to finish, it feels as if the cast don’t actually stop to breathe. There is a great deal of staging with characters shouting and running around with no real rhyme or reason, and the dialogue being said is fast and flustered; it is hard to keep up with who everyone is and what exactly is going on.

Even the final scene, which has every character in a flapper dress and accepting each other for who they are, would be endearing and heart-warming if there were enough character development and time to fully process the journey each character had been on throughout the show to lead to this moment.

Whether this is because of the short length of the show or not, it’s hard to tell, but unfortunately, what could have been an uplifting and stand out final scene has this effect lost slightly due to the rapid movement of the rest of the show.

Despite its shortfalls, the hard work and talent of the cast cannot be denied. The energy levels are maintained from start to finish, admirable in a show where there is so much happening at once.

Michael Matus’ portrayal of Georges is fantastic, rarely leaving the stage. He effortlessly portrays Georges inner conflict at having to hide his true personality versus sacrificing his true authenticity to please his son’s future in-laws and secure his son’s future happiness.

The set, designed by Tim Shortall is stunning and the transformation from a beautiful and subtly flamboyant dressing room/sitting room in act one, to a conservative basic living area in act two should be applauded.

Similarly, the costumes, also courtesy of Shortall, are cleverly done with a stark contrast between the bright colours and the glitter and tassels for the drag queen costumes, to the dark and sombre feel of the costumes worn when trying to mask their personalities. The light and shade of these choices and nuanced details are striking.

Overall, whilst this show has areas for improvement and may still be rough around the edges, there is evidence that with more time and consideration given to some choices within the production. La Cage aux Folles [The Play] is unfortunately not a patch on its musical or film counterparts.

However, it remains a story that celebrates differences and encourages people to stand out and be themselves, no matter what others think. Something which, in today’s world, cannot be understated.