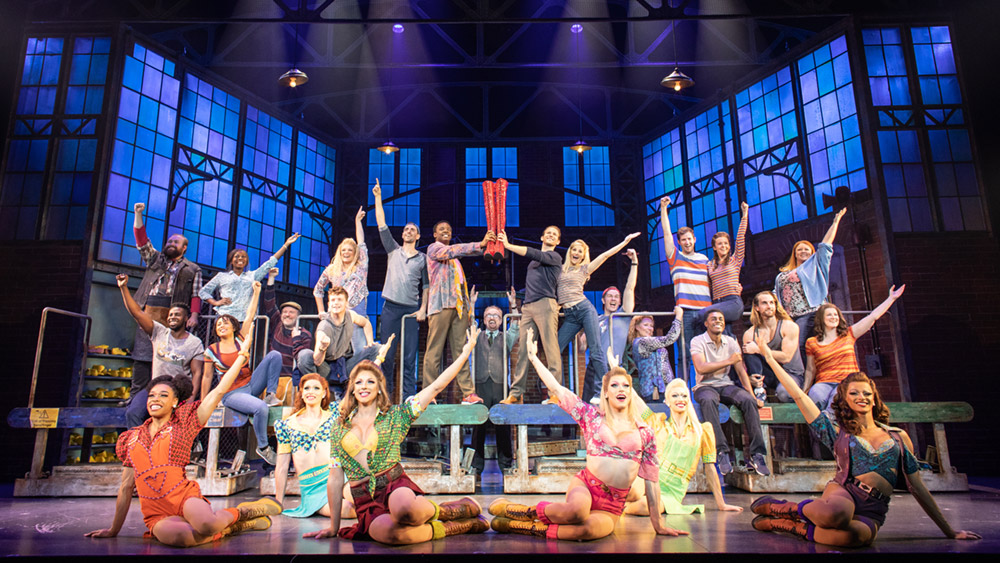 Many modern musicals showcase music and lyrics written by famous performers. From pop stars to rock groups, the involvement of already well-known and successful musicians is now common place in the world of musical theatre. Many take the form of Jukebox Musicals (Rock of Ages, Mamma Mia, Priscilla, Jersey Boys etc) where famous songs are worked into a storyline to create a full musical.

The other main alternative is where the songs have been specifically written (or at least adapted) for the musical itself by a famous singer/musician. Examples of this style include 9 to 5 (Dolly Parton), Tommy (Pete Townshend of The Who) and of course Kinky Boots, where the music and lyrics created by 80s superstar Cyndi Lauper shape the show.

Kinky Boots approaches the end of its first UK tour, almost exactly seven years after it premiered in Chicago in 2012. This theatrical adaptation of the 2005 British film of the same name (written Geoff Deane and Tim Firth), was actually conceived only a year after the cinematic release, but didn’t officially begin production until 2010.

Since then it has entertained audiences worldwide, from Australia and Korea, to Japan and Canada, and of course the USA, where it has had two national tours as well as Broadway and Chicago residential runs. In the UK it enjoyed a West End run of nearly 1500 performances and won a Laurence Olivier award for Best New Musical to add to the two Tony Awards (Best Musical and Best Original Score) it already had to its name, before embarking on this tour last year.

The story follows Charlie Price (Joel Harper-Jackson) the namesake of the latter part of Price and Sons Shoes, and his inheritance of the family business after his father’s demise. The failing factory is on the brink of closure which in turn threatens the inescapable unemployment of its long-serving staff members, and as a result Charlie has to come up with a way of saving not only his family’s business, but also the jobs of those he has grown up with and cares about dearly. Enter Lola (Kayi Ushe), a drag performer who heads up a team of cross-dressing men in need of fabulous footwear that can support the male frame. The inevitable chaos and excitement that ensues is dotted with very touching and deep moments of sadness and heart-ache, and shows the daily struggles of those considered “different” as well as normal life problems in business and love.

Harper-Jackson is fantastic. His characterisation and demeanour couldn’t be more perfect for the role of Charlie and his strong (quite pop-styled) vocals are excellent. He has some lovely moving moments that break up the more frequent comedic feel to his part and delivers both sentiments equally confidently and ably.

Ushe is quite simply jaw-dropping. From his hilarious and perfectly timed delivery, to his astounding stage presence, he never puts a foot wrong (quite literally when it comes to the choreography too!) The endless energy he exudes in the big numbers is matched by the thoroughly believable and powerful feeling he gives to the emotional and moving tracks. His extraordinary singing voice inspires roof-raising cheers and applause one moment, and then creates an atmosphere where you are almost able to hear a pin drop the next – his influence over the audience is incredible. His overall performance is magnificent and at no point is he any less than brilliant.

Lola’s Angels, the vocal and dance group of drag artists she heads up, are absolutely amazing. The team of six (Connor Collins, Daniel Downing, Damon Gould, Joshua Lovell, Chileshé Mondelle and Toyan Thomas-Brown) are so full of energy that you can’t take your eyes off them. Their flexibility and dance ability often boggles the mind and their individuality as characters impresses as much as their unity.

One other member of the cast who truly stands out is Demitri Lampra as the un-accepting and old-fashioned Don. Lampra plays his role flawlessly with the perfect blend of nastiness and buffoonery, and has the audience crying with tears of laughter at times.

The story line and music are equal to the quality of the performers. From the beautiful and poignant ballads, to the in-your-face outrageous up-tempo numbers, coupled with the strong dialogue, innovative set, superb choreography and wonderful costumes, the show takes you on an emotional rollercoaster which never stops being an enjoyable one.

Not only has Jerry Mitchell directed a wonderfully touching and entertaining piece of theatre, but he also happens to be the choreographer, and has got it absolutely spot on in that respect too. Every big dance number is perfectly timed and the cast (particularly the Angels) give 110% to every single move. The urge to get up and join in is hard to resist (and by the end resistance is non-existant!) and the entire audience claps, taps and sings along throughout.

Kinky Boots truly is a wonderful night out at the theatre. The message in bringing awareness to what the transvestite and drag communities have to endure at times, is an important and clear one, but never feels preachy or unjustly highlighted.

It deals with a difficult subject with grace, and the story beyond that is heart-warming and never fails to make you smile. It is a big shame that this particular run ends very soon, and it is worth trying to get tickets if you can – but if not, there is no doubt Kinky Boots will be strutting its stuff again in the UK in the near future.