REVIEW: Kinky Boots – it may not have the West End budget, but it has the talent, dedication, and passion 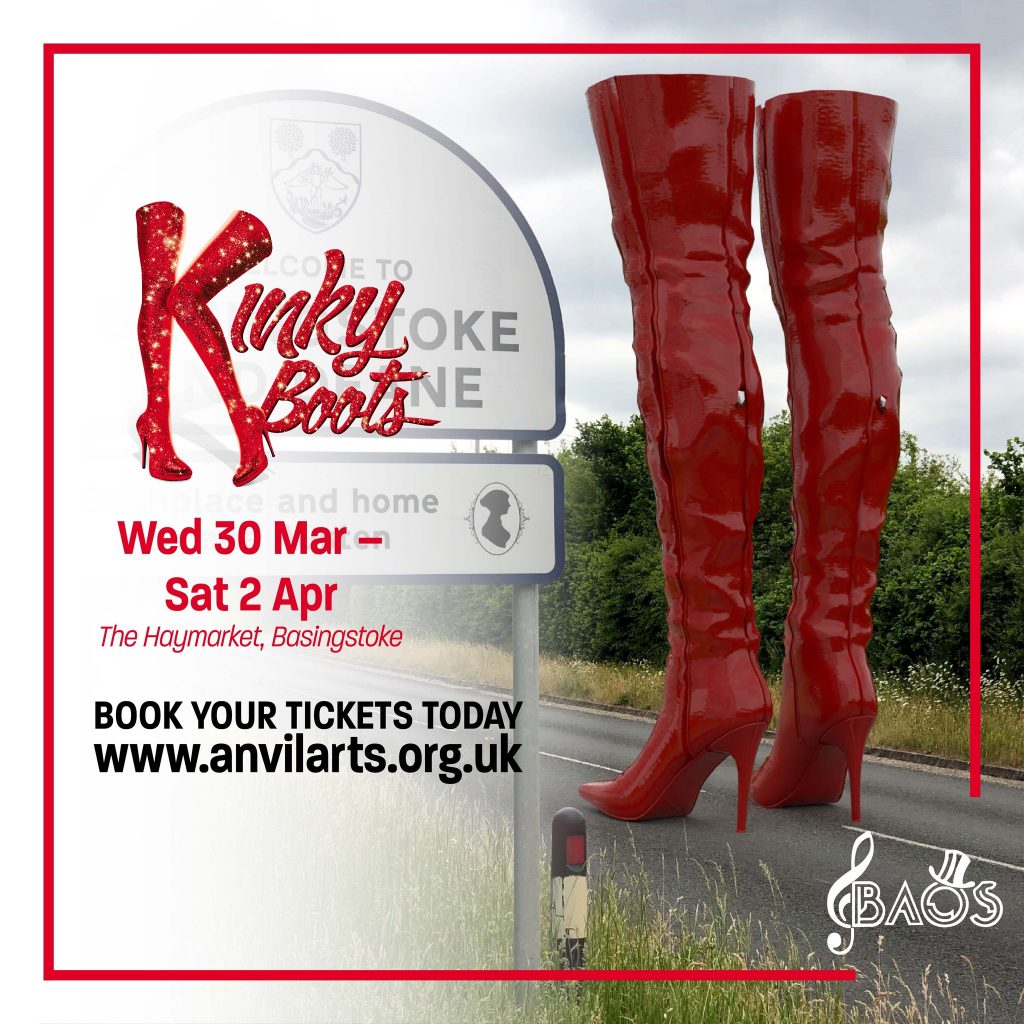 The fun, positive and joyous show that is Kinky Boots is the perfect thing to bring smiles to everyone’s faces after the dark period we’ve all had, and Basingstoke’s Amateur Dramatic Operatic Society is providing exactly that to Basingstoke this week.

Running from the 30th of March to the 2nd of April, BAOS is back with another blinding show at Basingstoke’s Haymarket theatre. Their shows are always a fun night out, but Kinky Boots in particular feels quite special, bringing that high energy and infectious enthusiasm that people love to get from live theatre.

Having previously watched a rehearsal of Kinky Boots, it was a treat to see the finished show, and it did not disappoint. Under Adam Bayjou’s direction, from the first to the final note, team BAOS have put everything they have into this show, and it would be a challenge for audiences to not leave the theatre smiling. What’s so heart-warming is that these are people who work ordinary jobs during the day and have still found the time and energy to put all these hours in, and give people a wonderful, positive show.

It’s not only the show itself that’s enough to warm hearts and bring a beam to your face; it’s seeing how happy everyone on stage is. Their passion and love for what they are doing are infectious and make it impossible to not get caught up in the show and story they are telling.

Leading the cast is Joshua Vaastra as Charlie Price and, Jerome Ifill as Lola, who are well deserving of their roles, not only showing off their vocals but bringing the emotions through their ballads such as ‘Hold me in your Heart’, ‘Not my Father’s Son’ and ‘Soul of a Man’.

Hollie Parks brings the character of Lauren to life and brings the comedy that makes her so loveable. Parks’ rendition of ‘History of Wrong Guys’ really shows off her embodiment of Lauren.

Supporting Josh and Jerome are a wonderful ensemble whose voices blend beautifully and reach every corner of the auditorium. The characterisation of the team is remarkable. Even when people are not the main focus of attention, their characterisation never drops and the cast still maintains and gives their all; in fact, it’s as interesting and entertaining to watch the ensembles’ reaction to the main action of a scene and how they interact with each other, as it is to watch the main show itself.

The Angels, played by Ben Shallow, Diana Sankey, Jade Williams, Tom Boncey, James Davies and Victoria Howard-Andrews are fabulous. They strut around the stage in their heels as if they own it, whilst showing off the fine choreography, courtesy of Luannsa Goodman. ‘The Sex is in the Heel’ in particular really showcases the choreography, the number being show-stopping by itself, really giving the Angels the chance to bring the glitz and glamour that makes Kinky Boots what it is.

Speaking of the Kinky Boots themselves, the costumes are stunning. The iconic red boots of course make appearances and combine with the glamorous costumes that the Angels and Lola are famous for, with a set that transports you straight to the Price and Son factory in Northampton, the attention to detail in the show elevates it and all helps brings it to life.

It’s no secret that when people come together to make a show happen, that team becomes a family. With BAOS and Kinky Boots, that much is obvious. The love and support they have for each other is palpable, the authenticity of the relationships on stage cannot be questioned.

One thing is for sure with the BAOS production of Kinky Boots  – it may not have the money that west end productions have, but it has the talent, dedication, and passion.

Kinky Boots runs at the Haymarket Theatre in Basingstoke from the 30th of March to the 2nd of April. Tickets can be bought here: https://www.anvilarts.org.uk/whats-on/event/kinky-boots#dates-and-times