REVIEW: Jack and the Beanstalk – The choreography & movement really are the feather in the cap of this panto 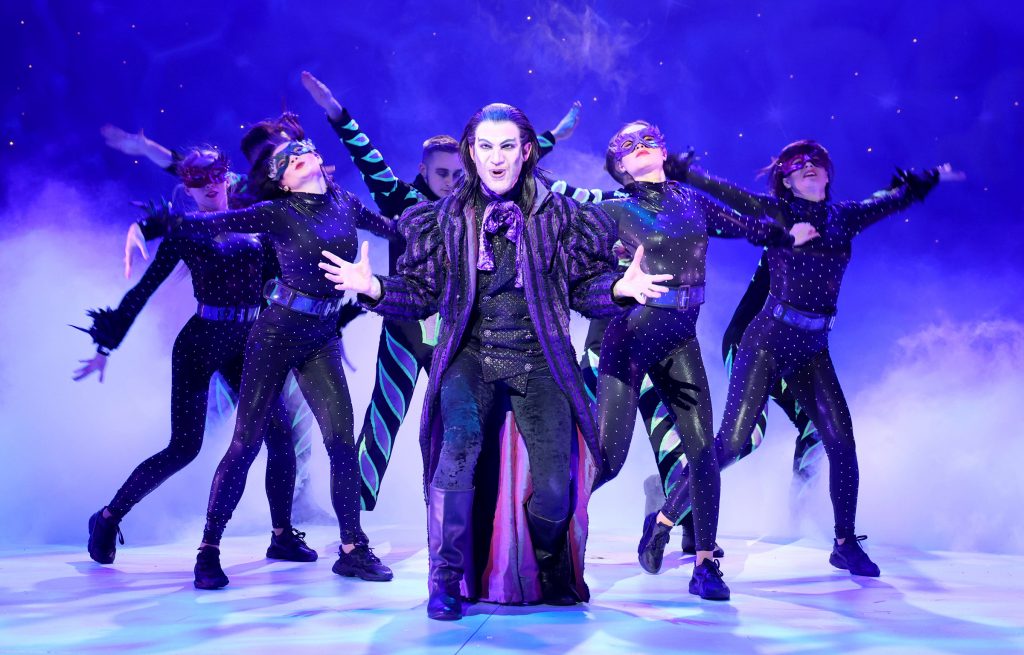 It’s certainly fair to say that panto season is now in full swing, with most open or imminently so. Milton Keynes Theatre throws open its doors this week, welcoming audiences to its annual pantomime extravaganza. This year’s headliners are 2009 Britain’s Got Talent champions Diversity, led by the multi-talented Ashley Banjo in the titular role.

Earlier this year, pantomime giants QDOS were acquired by Crossroads Live, and Jack and the Beanstalk is one of their larger offerings. Set in the fictional town of Roundybout (a nod to the infinite number of roundabouts in MK) the residents are routinely terrorised by the giant Blunderbore up in Cloudland. When his lackey Fleshcreep steals Jack Trot’s family cow, Daisy, the family decide to ascend the beanstalk to save her.

Proceedings certainly start strong with the villainous Daniel Boys as the revolting Fleshcreep opens the show with thunderous energy. He’s flanked by an incredibly accomplished ensemble. Billed as the giant’s lieutenant Fleshcreep is the quintessential panto villain. He elicits plenty of boos and hisses as he teases the younger audience members with the prospect of ending up in a ‘steak and kiddie’ pie.

It takes a little while for Diversity to materialise, but when they do, their initial high-octane routine is worth the wait. Unfortunately, the three main stars of the troupe, Ashley, Jordan, and Perri just aren’t up to the gold-plated panto standard. Without question, they can dance, but sadly their acting performances feel awkward, laboured and very unsure. Even the Diversity dance sequences begin to feel samey and don’t hit the heights of the routines that made them famous. This seems odd as it’s Diversity’s fifth panto to date.

Perri is the strongest of the three and once he rectifies a microphone issue, he hits his stride. Back in 2009, he was the fresh-faced baby of the dynamic dance troupe, but he is all grown up now and more than holds his own in this production.  All three are incredibly enthusiastic, and their energy can’t be denied, particularly during the amusing ‘If I Was Not in Pantomime’ routine which ends the show on a much-needed high.

Sadly, what Jack and the Beanstalk lacks in abundance is humour. Pete Firman brings some much-needed light relief and tomfoolery to the piece as an endearing Simple Simon. He is also an incredibly competent magician. He creates a wonderful blend of slapstick comedy and magic with an endearing charm. It could be argued that he is a touch underused. More could have been made of his relationship with his mother Dame Trot played by Jack Land Noble. More comedic interludes between the pair would have been welcome.

Jack and the Beanstalk is always a slightly problematic panto. The antagonist giant is notoriously difficult to get right, and his eventual reveal feels underwhelming. A fairy, or in this case, Mother Nature doesn’t naturally slot into the narrative, and such is the issue here. Whilst Gina Murray is the strongest vocally in the cast, her character feels somewhat shoehorned in. As a result, the story feels disjointed and lacks natural flow. Jack’s girlfriend Jill (Laura Evans) is supposed to be a princess but hangs out with peasants. The narrative just doesn’t feel thought through.

Of course, with panto extreme liberties are always taken with the source material, but here it feels like a tombola of themes and ideas have been thrown together and selected at random.

All that said, the cast’s energy and enthusiasm cannot be denied, and the panto schedule is gruelling, and for that, they deserve all the plaudits. The competent and talented ensemble delivers Nick Winston’s choreography with aplomb and blends seamlessly with Banjo and Diversity’s signature style. The choreography and the movement really are the feather in the cap of the production, as you would expect.

Firman’s Simon and Daniel Boys’ Fleshcreep go some way to elevating proceedings but unfortunately for Milton Keynes this year’s offering just falls short of previous outstanding productions at the venue. However, as Ashley Banjo mused at curtain call, the darkness of theatre left such a big hole for all involved in the industry and that will never again be taken for granted. The cast deserved their standing ovation as they do their absolute best with the material they have been given.