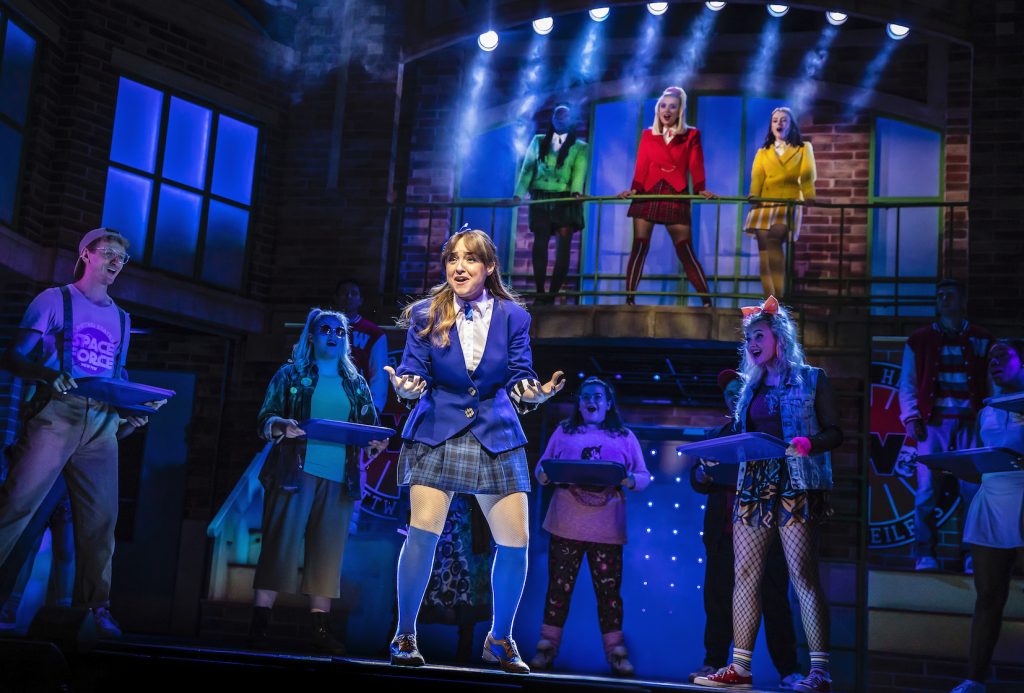 If you ask any teenage theatre fan what their favourite musical is, Heathers The Musical will easily break top five. Fortunately for theatre kids up and down the UK, the musical is on tour. How very.

Based on the 80s cult classic starring Winona Ryder and Christian Slater, Heathers The Musical is the story of a clique of three girls named Heather who take Veronica Sawyer under their wing. Unfortunately for them, and their whole school, Veronica’s (Rebecca Wickes) relationship with new boy J.D (Simon Gordon) leads to a string of fake suicides, and the high school social structure begins to crumble.

Written by Laurence O’Keefe and Kevin Murphy, Heathers The Musical is high octane from the first note. Rebecca Wickes starts strong with a very ‘musical theatre’ portrayal of Veronica Sawyer compared to previous iterations of the role. She is a squeaky-clean Veronica, as opposed to the sassy and darker Veronica seen in previous versions of the role. Whilst initially this is jarring if you know the production well, this portrayal is a fresh take on the character which worked beautifully.

We are introduced to the Heathers early on into the show, and for once they are all believably teenagers. Heather Chandler (Maddison Firth) is the leader of the clique, standing out on stage in her red ensemble and a high pony, Heather McNamara (Lizzy Parker, her professional debut) is the lovable captain of the cheer squad dressed in sunshine yellow, and Heather Duke (Merryl Ansah) is the wannabe leader rounding off the clique in green. Musically, the Heathers are on it vocally and their dance timing is untouchable. The three roles are meaty in a way that the mean girls in musicals often lack, and their respective solo performances have gusto.

We are introduced to Simon Gordon’s J.D in a fight scene between him and two football players (Liam Doyle and Rory Phelan playing Kurt and Ram respectively), with these three roles perhaps less believably ‘teen’ – you only have to see the football players at the end of the first act for this! The audience falls for J.D as quickly as Veronica, with smooth vocals from Gordon starting with a stellar performance in Freeze Your Brain. It’s an interesting experience watching J.D spiral in this production, as in other performances the internal battles the character faces seem to almost come out of nowhere. The anger often explodes. But Gordon’s portrayal is a clear sink into madness.

With three years under its belt in this particular UK version, Heathers The Musical has found its place in the theatre world. Whilst there are a couple of songs that feel unnecessary and serve as filler songs to pad out the run time – such as Kindergarten Boyfriend (beautifully performed by Mhairi Angus as Martha Dunnstock, another professional debut) and My Dead Gay Son – the majority of the numbers are songs the audience leave the auditorium humming. They’re earworms, with brilliant choreography by Gary Lloyd to boot.

Particularly striking in this production is Ben Cracknell’s lighting design. There is plenty of colour work, each beam of light worked intricately into the show for different characters. There are plenty of backlit moments, adding atmosphere to the staging throughout too.

Heathers The Musical is a fantastic night out at the theatre that has truly developed over its various runs in the UK. Get in quick while you can, catch some incredible young actors before they make it big – it’s a real night of Big Fun!