REVIEW: Hairspray UK Tour – Just try and stop the beat – we dare you 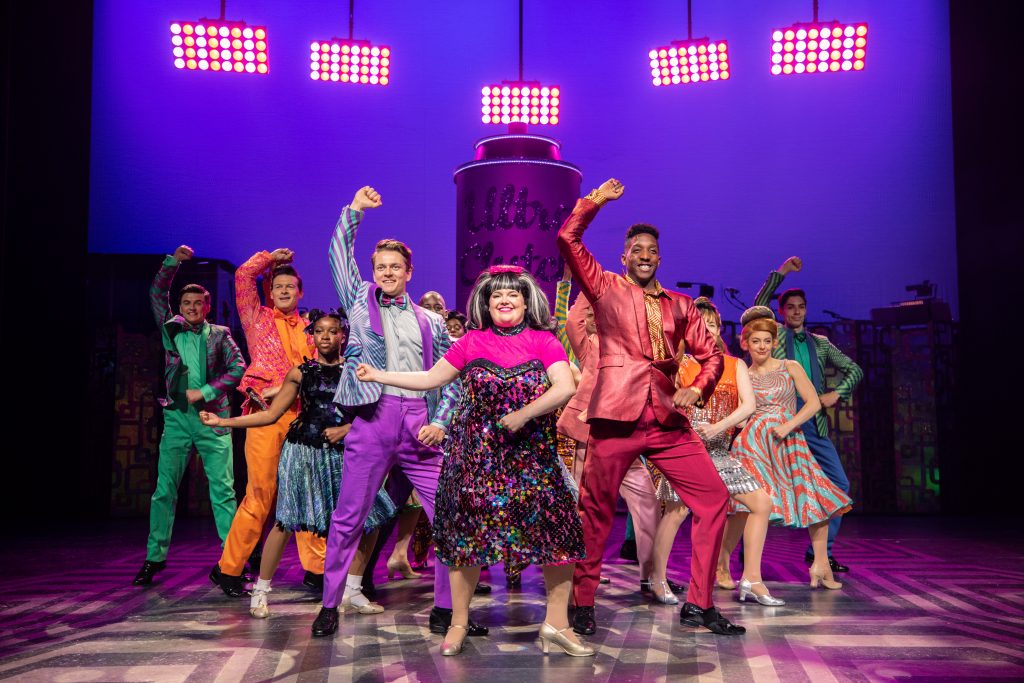 After a long 18 months, the stage of Aylesbury Waterside Theatre is alight once more. With the nicest kids in town, Aylesbury couldn’t have chosen a more vivacious and exuberant opening gambit than the Hairspray UK Tour. The show is currently enjoying a revival both in London and on tour, with both productions running concurrently.

Hairspray started life in 1988 as a film by John Waters. It made its Broadway debut in 2002 going on to win eight Tony Awards. Hairspray has also enjoyed multiple tours in the UK, along with a West End Production and of course the 2007 smash hit musical film starring John Travolta and Zac Efron.

It’s 1962 and the larger-than-life, bold and vivacious teenage Tracy Turnblad longs to dance on The Corny Collins Show. Undeterred by bullies and society in general, Tracy peruses her dream, securing her place on the show, and catches the eye of local heartthrob Link Larkin. Not content with her newfound fame, Tracy turns trailblazer and begins campaigning for racial inclusion and equality in Baltimore.

Tracy is played by the effervescent Katie Brace. It’s safe to say that Brace is truly made for the role. She not only makes Tracy her own, but elevates her to new heights. Her smile is infectious and her energy palpable. She not only commands the stage, she lights it up. Brace is complemented in droves by Rebecca Jayne-Davies, who plays Tracy’s best friend Penny. Jayne-Davies’s comic timing is on point, and she is an utter revelation. It’s nigh on impossible to take your eyes off her. Her nuanced movements and facial expressions are sheer genius. The pair are matched perfectly by their respective love interests. Ross Clifton brings a renewed charm and tenacity to Link Larkin and Akeem Ellis-Hyman is endearing and cheeky as Seaweed.

Indeed, the touring cast is so strong, it’s tough not to make this review a name-checked love-in. There is no weak link, and the energy of the cast is off the charts. It’s pure joy to see this cast perform together after such a tumultuous time for the industry and the challenges individuals have faced. It’s such a testament to their resilience to see this show be such a success.

The iconic character of Edna Turnblad is played on tour by Alex Bourne. Bourne’s performance is fresh and somewhat toned down from the usual, pantomime dame interpretation that befalls Edna. His incarnation is fabulous, and he really delivers a believable arc for Edna’s journey. Comedian Norman Pace takes up the role of Wilbur Turnblad his and Bourne’s chemistry is a delight. They ham it up in the duet (You’re) Timeless to Me showcasing both actors’ comic prowess. Pace does wonderful justice to Wilbur’s love for his family.

Richard Meek puts in a strong turn as Corny Collins, Meek is a musical theatre performer who never delivers less than perfection. He plays off Rebecca Thornhill’s bigoted Velma Von Tussle with panache. Speaking of Velma, Thornhill does an excellent job in making her thoroughly unlikeable, as does Jessica Croll in her portrayal of the spoilt Amber. Former X-Factor favourite and vocal sensation Brenda Edwards brings sass and class to the role of Motormouth Maybelle, and it’s always such a travesty that the character doesn’t get more stage time.

Although the set design remains largely the same as previous productions. Somehow, the show feels bigger and bolder. Ben Harrison’s sound design ensures the numbers sound crisp and clear throughout. Ben Atkinson leads a wonderfully accomplished band lifting this iconic soundtrack to the next level, making the most of the incredible sound design. Drew McOnie’s choreography is smooth and dynamic, with the wider ensemble cast never dipping in energy.

Hairspray is such a beloved musical, and the popularity of the show endures because of its relevance to today’s society. Even after 30 years, it is still possible to connect with the characters. Hairspray is an incredibly clever piece of theatre that delves into heavy and serious themes of racism, sexism, body shaming, and bullying. Although this is done in a light-hearted and non-confronting way, it doesn’t take away from the seriousness of the message.

This is an effervescent, energetic, and incredibly slick production that will delight audiences both old and new. Just try and stop the beat – we dare you.