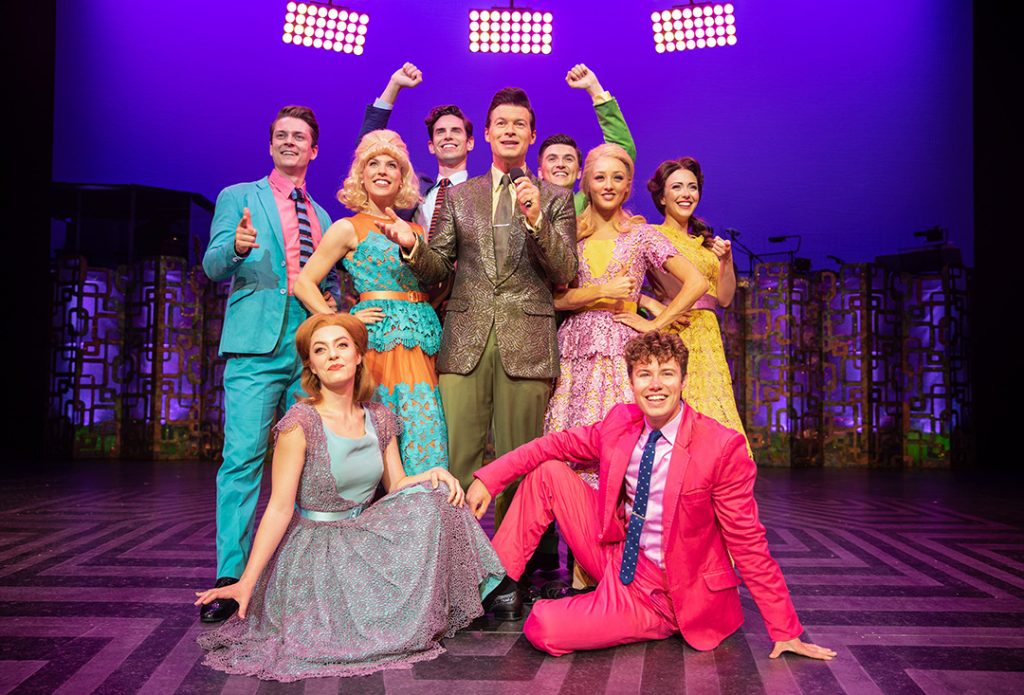 Based on the film written by John Waters, Hairspray dances onto Milton Keynes’ for the week as part of their UK Tour. With the beginning of the tour running in parallel to an extremely successful London run starring heavyweights Michael Ball, Les Dennis, Marisha Wallace, and Rita Simmons, expectations are certainly high. If there were any doubts that the tour is the poor relation to its London counterpart, those are dispelled from the get-go, this show is a knockout! With an all-star cast including Brenda Edwards and Norman Pace, this cast is new, vibrant, and refreshing, just like its source material. This high-octane celebration of individuality and inclusion is brought to new heights with this version of the production, almost as high as Tracey’s hair.

Whilst this show follows the same timeline as the well-loved film, there have been some tweaks to aid the transition to stage – as well as to make it be more appropriate for the current climate. That said, the gritty racism and struggles with segregation are still clearly displayed throughout both acts. The comments and terms are used enough to get the point across but have been pulled back significantly to ensure that that all cast and creatives are comfortable with the show.

Just like Book of Mormon, this show has undergone tweaks and changes to make it less problematic, but the main areas of importance are still just as jarring and bold as always. The main theme throughout the show is Tracey Turnblad’s dream to end segregation, fight for inclusivity, and ultimately and simply, to just dance with her friends.

With the removal of the cheating scene, Ms. Pingleton’s ‘Devil Child’ admonishments, and the new way of Tracey meeting Link, it could be said that there have been too many changes, but they truly don’t detract from the storyline or affect the enjoyment of the show in the slightest. It is still a night of outrageous family-fun, filled with laughter and the occasional tear.

Of all the changes, there is only one that isn’t necessary, and that is the change in the ending. Those who are familiar with Hairspray know that, originally, Little Inez is the one who wins the pageant at the end of the show; however, this new version instead has Tracey winning by a landslide. This change is quite disappointing, as it was such a strong and important moment for Inez to win the competition, as the show becomes integrated. It just seems like an unnecessary change and leaves the audience missing that explosion of energy that comes with Little Inez’s victory dance.

Speaking of Little Inez (Charlotte St Croix) she bursts onto the stage like a ball of infectious joy and energy. St Croix is a genuine firecracker oozing with talent and attitude, it’s hard to take your eyes from her.

Tracey Turnblad is brought to life by Katie Brace on this tour, marking her triumphant professional debut. Brace adds in her own little quirks and quips to make her interpretation of the character completely unique. Paired with Ross Clifton as Link Larkin, they become a naïve lovesick couple that are too engrossed in their own little bubble to care about anything else – something many people can relate to.

This power couple are joined by Zoe Heighton as Penny Pingelton and Akeem Ellis-Hyman as Seaweed, who give the main pairing a run for their money. This dynamic duo are love-stricken sweethearts who are just as brave as they are talented, balancing that perfect line between showing off without being too much. Ellis-Hyman as Seaweed is an exceptional casting choice, this role is practically made for him.

For opening night, Milton Keynes was treated to three understudies helping bring the show to life.  Paul Hutton steps in as Wilbur Turnblad, Zoe Heighton takes on the role of Penny Pingleton and Liam Dean provides a solid turn as the ‘male authority figure’. All three, reinforce the importance of standbys and understudies as they seamlessly make the characters their own.

There are standout performances from Paul Hutton as the hilarious jokester Wilbur Turnblad and Brenda Edwards as the incomparable Motormouth Maybelle. Edwards is known for her vocals from her stint on X-Factor, plus her attitude from being a part of Loose Women, and she brings both characteristics into her incredible portrayal of Ms. Maybelle. During her performances of Big, Blonde and Beautiful and I Know Where I’ve Been it’s hard not to be awestruck. It’s goosebump-inducing stuff.

Rickard Meek is excellent as the legendary Corny Collins, giving the insane vocal talent needed for the show host and pairing it with the swagger and charm of a true star. Alex Bourne as Edna Turnblad provides an entertaining and classic portrayal of the larger-than-life matriarch but just lacks that little something. However, he truly comes into his own when he plays off Hutton’s Wilbur. The chemistry between the pair is electric, and the additions of occasional ad lib or improv made for hilarious scenes between the pair. Their interpretation of You’re Timeless to Me is all kinds of sweet and sincere yet so outrageously uproarious.

A review of Hairspray cannot be complete without a nod to wig designer Diana Estrada, the woman responsible for making Tracey’s hair as high as the level of talent on stage. She is a true magician and deserves an award for all the insane hairstyles she helps bring to life on stage.

Overall, this show is such a fun-loving experience that will be a great evening at the theatre for anyone from families to a girl’s night out.