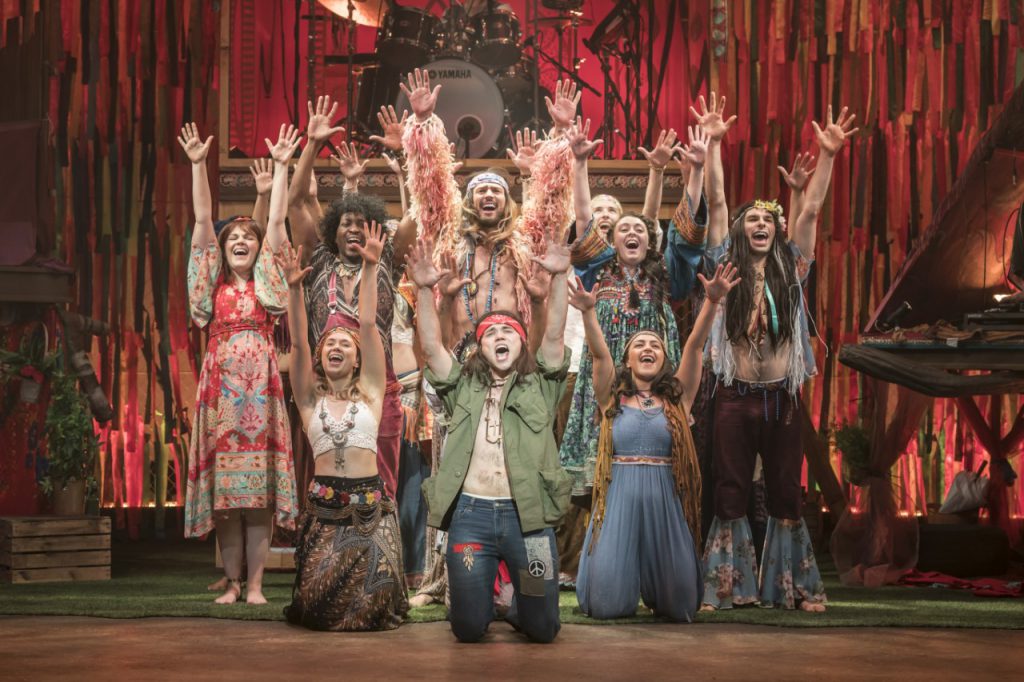 Welcome to 1967 and the ‘Age of Aquarius’ which is steeped in hippie counterculture and sexual revolution. Hair’s hippie ‘tribe’ reside in the East Village of New York where they shun conventional society, defy authority and yearn to change the world. Set in the shadow of the Vietnam War, Hair blazed a trail in musical theatre through its definition of the rock musical genre where it utilised a racially diverse cast and helped to define the concept of immersive theatre.

The show is currently celebrating its 50th Anniversary and Hope Mill Theatre’s production of Hair has been touring the UK following runs at the Manchester Fringe Theatre and in London. With the book and lyrics by Gerome Ragni and James Rado and music by Gal MacDermot the show is set against as Grammy® award-winning score featuring iconic and much-loved hits such as ‘Aquarius’, ‘Let the Sunshine In’, ‘I Got Life’ and ‘Good Morning Starshine’

The cast are as hot as the soaring temperatures outside. With vocal prowess in abundance, the vastly talented cast includes Dancing on Ice Winner Jake Quickenden, Daisy Wood-Davis (Hollyoaks/Dreamboats & Petticoats) and Marcus Collins (X-Factor/ Kinky Boots). Quickenden soon sets the scene of liberation and freedom as he drops his trousers, flinging them into the audience below. Quickenden produces a solid and charismatic turn as the rebellious and confrontational Berger; his vocals are rich and his range broad. Marcus Collins is effervescent as the free-spirited Hud as he showcases his beautifully soulful vocals. Bradley Judge is buoyant in his role of Woof, a part he plays with an infectiously joyous energy.

Paul Wilkins plays the conflicted character of Claude, torn between living his truth and his patriotic duty of serving in the war. Claude is the only character that receives some tangible development, with the others serving mostly to highlight his quandary. However, despite the strength of the male cast the standout performances come from Aiesha Pease as Dionne and Daisy Wood-Davis as Sheila. Both nigh on blow the roof off the Grand Theatre with their powerhouse vocals and incredible stage presence.

Whilst the talent of the cast is undeniable, the main problem with this production of Hair is its relevance and connection to a modern audience. In 1967 Hair was a show that challenged and defied convention though it’s provocative content. The musical’s unapologetic use of profanities, drug use and overt explorations of sexuality caused extensive controversy. Yet somehow, in a far more liberal and accepting world (although, clearly there is work still to do) the themes of the hippie movement of the 1960’s just don’t feel relevant which makes it difficult to connect to the piece in its entirety.

Jonathan O’Boyle’s direction is sharp and slick with William Whelton’s choreography delivered perfectly by the highly polished cast. Whilst Maeve Black’s design is wonderfully representative of a hippy commune and the costumes are pristine and authentic, the set makes no reference to the setting of the piece. Unless armed with prior knowledge the audience has no idea that the tribe is gathered in New York.

There is no denying the songs are both iconic and infectious. Musical Director Gareth Bretherton leads a highly accomplished band that is immersed with the cast on stage. Unfortunately, the sound design feels a touch on the loud side with the band at times drowning out the vocals making the diction difficult to decipher.

Despite losing some of the grit and shock factor for which it used to be known, Hair is still a vibrantly powerful production that celebrates diversity and freedom. Having now passed this anniversary milestone, it would be incredibly refreshing to see Hair reimagined for a modern audience as a production that connects with today’s youth as the original did back in the 60’s. What a tribute that would be to the lasting legacy of an iconic piece of theatre.