REVIEW: Everybody’s Talking About Jamie – A joyous production that fully deserves its place in the spotlight 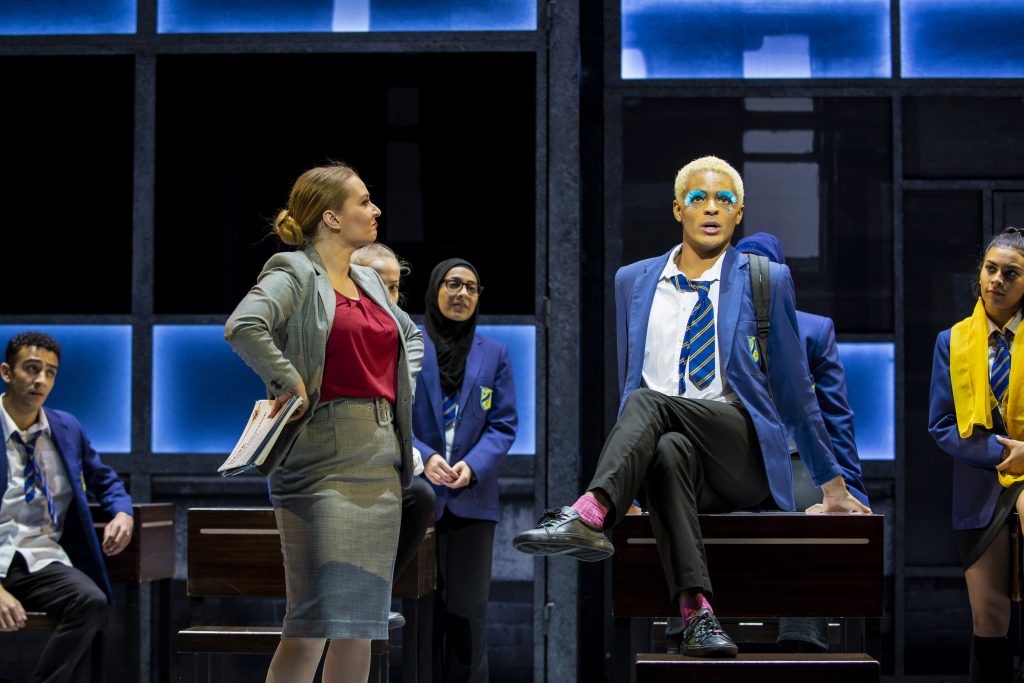 Contemporary and fresh with an unbreakable mother and son relationship at its heart, Everybody’s Talking About Jamie, celebrates love, friendship, and the power of self-acceptance.

Jamie New is 16 and growing up in a working-class area of Sheffield.  Money is tight and Jamie and his classmates are advised not to dream.  Jamie is terrified to reveal his secret ambition to become a drag queen.  Supported by his loving mum, encouraged by his best friend, Pritti, and inspired by local legend Loco Chanelle, Jamie eventually overcomes bigotry and his self-doubt to step ‘out of the darkness and into the spotlight’.

The musical was inspired by the true story of Jamie Campbell and his mother Margaret.  Director Jonathan Butterell, saw the Firecracker documentary Jamie: Drag Queen at 16 by chance but the story of the boy and his mum in a working-class community resonated.  He joined forces with writer Tom Macrae and Dan Gillespie Sells, lead singer-songwriter of the band The Feeling, and they began creating Everybody’s Talking About Jamie.

Unsurprisingly, Dan Gillespie Sells’ songs are incredibly catchy and beautifully written.  The opening number And You Don’t Even Know It has real energy and transports the audience to Jamie’s world.  Set in a classroom where hopes and aspirations are few or unrealistic, the brilliant ensemble captures the excitable, part-feral energy of Year 11 perfectly.  Within the boys’ bravado and the girls’ gossip, individual characters are swiftly drawn and instantly recognisable.  At the start of the second act, the high-impact ensemble number, ‘Everybody’s Talking About Jamie’, creates a real buzz and immediately draws the audience in.

Layton Williams excels as Jamie, portraying his extrovert sass and inner vulnerability with both flair and sensitivity.  The connection with his mum, Margaret, feels very real and is in stark contrast to the toxic relationship with his estranged father.  Amy Ellen Richardson gives a stand-out performance as Margaret.  Her rendition of He’s My Boy is show-stopping; a beautiful song that captures the pain, joy, and unconditional love of being a mum perfectly.

The show is packed full of warmth and comedy and the power of friendship is present throughout.  Down-to-earth, crisp-butty eating Ray gives unwavering support to Margaret and Jamie.  Quiet, unassuming Pritti, who also faces bigotry, is Jamie’s loyal best friend and encourages him to follow his dreams and choose how he wants to live his life.  Loco Chanelle and the queens at Legs 11 offer the acceptance that Jamie dreams of

Personified by Jamie’s dad and fellow student, Dean, the show certainly doesn’t shy away from the cruel realities of hatred and bigotry.  Even his teacher, Miss Hedge, who seems to want the best for him, tries to dissuade him from following his dream.  Tellingly, it is Dean who becomes isolated and Jamie’s father misses out on knowing his son.

The set is incredibly well-planned, and the cast moves the scenery effortlessly between the classroom, Jamie’s home and the Legs 11 Drag Night.  There is also a very impressive costume change.  Jamie’s kitchen is painted a warm, sunny yellow and represents hope and positivity in an otherwise grey world.  Pritti’s bedroom, with its illuminated globe, stars, and Buzz Lightyear cuddly toy reveals the future of a quiet, shy girl whose dreams and determination will take her to infinity and beyond.

Self-doubt and the impact of other peoples’ opinions are universal and these themes give this musical its emotional punch.  As Jonathan says, ‘we hope that audiences will see a bit of Jamie in themselves too.’

This excellent exploration of identity and belonging celebrates love and acceptance.  A genuinely uplifting, heart-warming musical fully deserving of the celebratory standing ovation.  Definitely see this show if you can.