REVIEW: Dreamboats and Petticoats: Bringing on Back the Good Times! 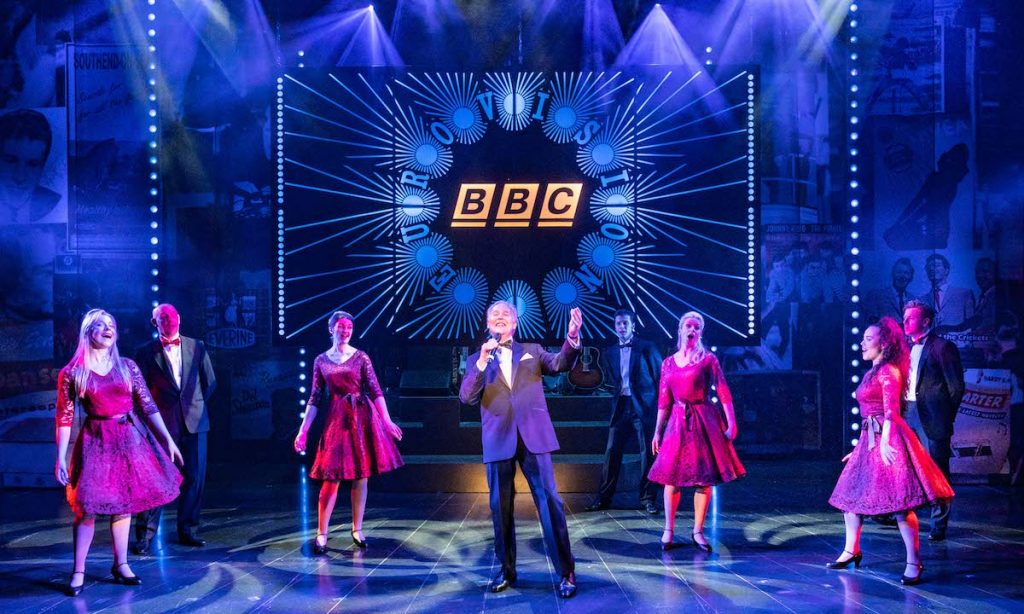 Jukebox musical Dreamboats and Petticoats is set in mid-sixties Essex and is unapologetic about being targeted at the baby boomer demographic. Featuring beehive hairdos, live singing, and energetic dance numbers aplenty, it’s a trip down nostalgia road for mature audiences. The production is the third part of a series of nostalgic British musicals, with predecessor Dreamboats and Miniskirts having played at The Alexandra back in 2014.

The musical is light on plot: it’s communicated that Laura (Elizabeth Carter) and Bobby (David Ribi) are two young musical talents dealing with the conflicts that faced youth with creative aspirations in the post-war era. Bobby and Laura are a couple who used to perform as a duo. Now because of ‘creative differences’, Bobby has rejoined his old band and Laura is a rising solo star. When Bobby and Laura are forced to spend two months apart due to their separate music careers, strain is placed on their relationship. Bobby’s bandmates also deal with their own minor dramas. There’s not a great deal more to the plot than that, so theatregoers looking for a story that puts them on the edge of their seats will be disappointed.

Yes, there are some funny lines in the script; a sure highlight of the evening is David Benson as Kenneth Williams hosting Eurovision, whose hilarious performance gives a chuckle to even the most stone-faced guests in attendance. Unfortunately, the dialogue between the young leads is forgettable with the chemistry between Laura and Bobby, conspicuous in its absence. As such, audiences who aren’t already familiar with the franchise may struggle to invest in the characters; we know too little about them to care about their fates.

However, the lightweight plot does leave plenty of room for the main attraction, the music. The musical trilogy this production is part of was originally inspired by a successful series of compilation CDs celebrating pop hits from the Rock’n’ Roll era.

A wide range of songs are performed, from more high-energy numbers to ballads like “You Don’t Own Me”, which Laura sings as a moving solo. It’s a fantastic vocal performance, but a bit more dramatic tension between the characters would push it to another level. Laura’s manager, Larry (Mark Wytner), is clearly controlling, but this relentlessly cheery show is uninterested in exploring the darker parts of the music industry, preferring to treat them as comic fodder. Granted, Dreamboats and Petticoats is marketed as a ‘feel-good musical’. The highs of the production would have a greater impact if its characters were permitted to experience real lows. This might come at the expense of a few songs, but it need not come at the expense of its overall ‘feel-good’ nature. Allowing the musical’s stars to express more emotional depth might broaden its appeal beyond lovers of 50s/early 60s nostalgia.

Another factor that holds back the production relates to the allocation of songs to actors. Without singling out any of the hard-working cast, some songs seem mismatched to the vocal ranges of those performing them. This is particularly true of songs best suited to higher voices. In addition, some of the cast’s vocal talents are under-utilised, such as those of Samara Clarke, who gives a standout performance as Donna.

Nonetheless, there is a range of enjoyable musical performances from the men and women of the cast.

Mark Wynter is perfectly cast in his role as pompous talent manager Larry, bringing to it his own experience in the post-war music industry; Wynter had a pop career of his own back in the 1960s. His performance of “Well I Ask You” should put to rest any doubts about whether a man nearing 80 can woo an audience with his soulful croon. He’s still got it, ladies and gentlemen!

The booklet for the production depicts Laura and Bobby sharing a milkshake. Dreamboats and Petticoats is a bit like a milkshake: frothy and sickly sweet. But if you have someone to share it with, it’s more digestible. As a light-hearted evening out for people who miss the days of Dusty Springfield and Roy Orbison, it’s not half bad. Under-50s without an independent interest in nostalgia for the era the production attempts to recreate might prefer to give it a miss.

Runs Until: Saturday 26 March at The Alexandra and on tour