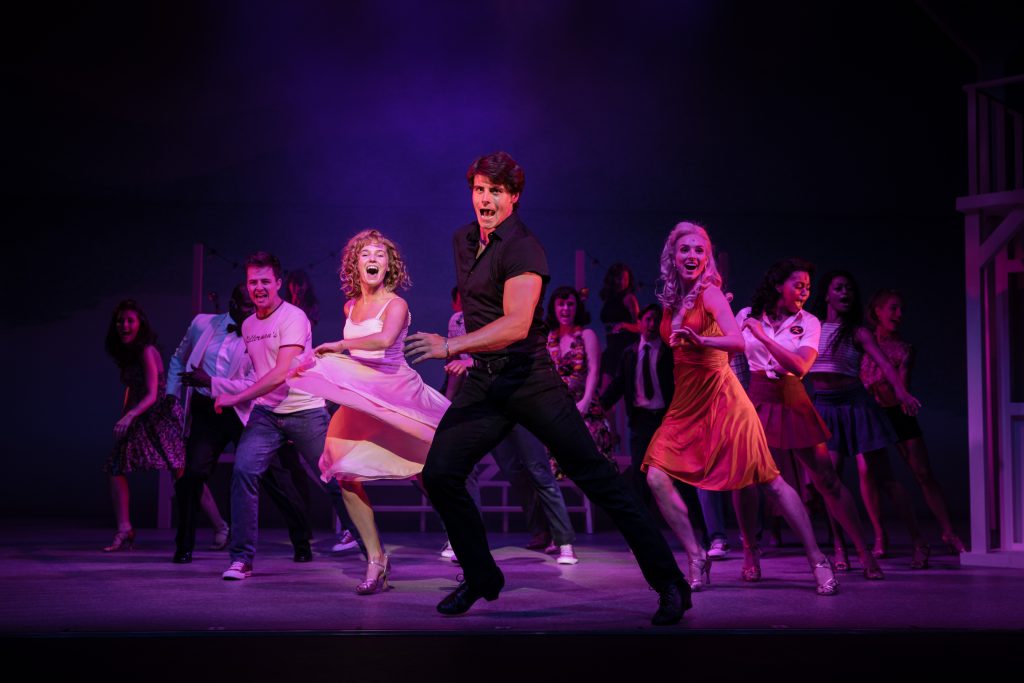 There are only a handful of truly iconic films and without a shadow of a doubt, Dirty Dancing is one of them. The cult classic coming of age story centered around the naïve and youthful Baby and her relationship with bad-boy dance instructor Johnny Castle is beloved by many and back on stage. Recreating the magic of a film as iconic as Dirty Dancing is often a challenge, but this vibrant cast takes it all in their stride.

Leading actors Kiera Malou as Frances “Baby” Houseman, and Michael O’Reilly as Johnny Castle are a brilliant pair, buzzing with energy. Whilst they both excel individually and are the absolute doubles of the original characters, they don’t quite have the spark of chemistry expected of Baby and Johnny. That said, Malou portrays Baby’s naïveté and oblivious clumsiness superbly. O’Reilly is the perfect candidate for the role of Johnny, he has the look and the swagger, but the accent took a little getting used to at first.

The show itself finds the perfect balance between having the steamy sex appeal of the film without it being too vulgar or uncomfortable. The only thing that disturbed the equilibrium was the large groups of women hollering whenever O’Reilly did anything remotely alluring i.e., taking his shirt off or Johnny’s trademark dirty dancing. Fortunately, this was only at certain points and doesn’t detract from an impressive show overall.

Alongside the shows’ dynamic duo, two standout cast members are Amber Sylvia Edwards as Elizabeth and Samuel Bailey as Billy Kostecki. Edwards’ smooth sultry tones open the show with This Magic Moment and continue throughout the production, aiding to blend scenes and add that extra layer of emersion and awe of the show. Bailey’s sweet angelic vocals resonate throughout the auditorium during In the Still of the Night (I’ll Remember) with an astonishing high note to finish with a flourish.

As expected, the best scene of the show is the final dance, though not because of the routine. Whilst the routine is as impressive and awe-inspiring as always, it is expected. What isn’t expected is Edwards and Bailey to perform a duet version of (I’ve Had) The Time of My Life. It is truly marvellous to see two talented singers execute and elevate such an iconic song so flawlessly.­

Though these two were absolute standouts, the entire cast was flawless. Mark Faith adds great levels of comedic relief with his outlandishly funny mannerisms as Mr. Shumacher, and Lizzie Ottley performed the ever-chipper annoying sister perfectly. Kellerman’s Band, comprised of Miles Russell, Ben Mabberley, and Tom Mussell, is a truly talented trio. They add depth and drama to the stage, with punchy trumpets and sharp saxophones helping drive home the emotion displayed onstage.

Choreographer Austin Wilks deserves every single bit of praise he gets, the performers slide and jive around the stage with calculated precision to ensure they never once collide or look muddled, it’s a true skill. Even during scenes where separate pairings perform vastly different routines, it’s still easily readable and you don’t get confused or lost at all. This insane choreography is highlighted by the equally talented Valerio Tiberi and Nick Richings, whose lighting arrangements use different coloured spotlights to both separate and highlight different dancers during group scenes.

This impressive lighting is also used to aid scene switches, lighting up the characters at the forefront whilst small changes are made in the background for a seamless transition. Unless you are looking for the changes, they seem to appear like magic. Overall, the set is very stripped back with a simple framework used throughout, with new additions to help transform the aesthetic. Although not overly technical, it is clean, easy to follow, and doesn’t feel lacking at all, a hard job but executed well by set designer Roberto Commoti.

Complementing the sleek and streamlined set, the cast vibrate with an infectious passion and excitement, delivering pulsating energy. Being a relatively small cast allowed everyone to shine and have the time of their life, it’s in the nature of the show, after all.

Overall, Dirty Dancing is not one to miss. It maintains the magic and chemistry of the original film, with the additions of live music and some jaw-dropping vocals to awe and inspire all that attend.