REVIEW: Death of a Salesman – New imagination of a classic hits all the right spots 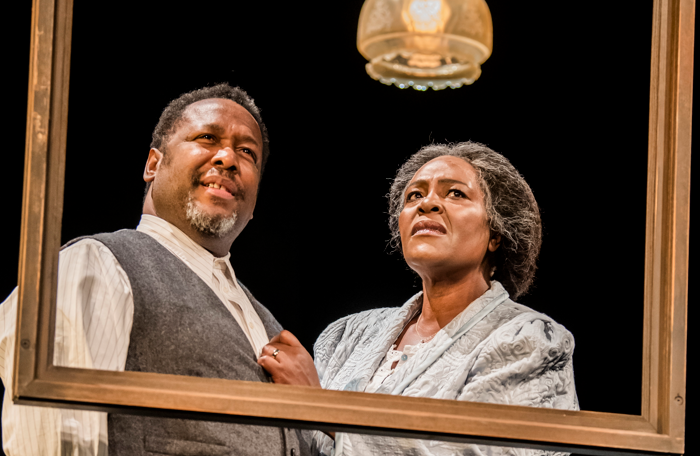 70 years have passed since the legendary Arthur Miller penned Death of a Salesman. Although his works by this point had actually hit double figures, it was the second piece he created that won notable awards (his previous play All My Sons won Tony Awards for Best Author and Best Direction) scooping no less than six Tony Awards, including Best Play and Best Author, as well as winning the hugely coveted Pulitzer Prize for Drama.

It is no surprise then, that it would continue to be as successful well over half a century later and that three of the four Broadway productions would secure Tony Awards for Best Revival. Radio adaptations, film versions and multiple translated outings all around the world substantiate the popularity further and this particular rendition in the West End follows a highly successful six weeks or so at the Young Vic Theatre.

The play revolves around Willy Loman (Wendell Pierce), a travelling salesman, his wife (Sharon D. Clarke), his two grown up sons Biff (Sope Dirisu) and Happy (Natey Jones), and their struggles to make ends meet as Willy’s career has gradually become less and less lucrative over the years.

It takes the viewer on a journey and allows them to witness first hand Willy’s issues with depression and his psychological troubles with visions, hearing voices and talking to ‘himself’. The Young Vic production and subsequently this West End transfer sees the family portrayed as African-Americans living in Brooklyn in the ‘40s, a brave decision but one that fits perfectly into the feel of the piece.

The direction from Marianne Elliott and Miranda Cromwell is superb. The clever way the flash-backs and memories are shown is easily differentiated from the standard progression and it is never in doubt what is happening inside Willy’s head and what can also be seen in reality by the others. The feeling of witnessing a family’s every day discussions, arguments and activities is never uncomfortable and the audience immediately forget they are watching a group of actors.

This can also be attributed to the immensely clever yet minimalistic set, the majority of which works by automated staging levels and flown in props and furniture varying the location at appropriate moments. The simplistic nature perfectly represents the poverty of the family in the home setting and also differs enough when it clearly becomes other venues like the Jazz club/restaurant and the various offices.

Wendell Pierce is fantastic. His delivery and handling of the language is immaculate and his comic timing simply brilliant. His ability to showcase the pride and confidence of the character and then in a second switch to the depressed and tortured nature of him is masterful and he commands the stage, thoroughly deserving of his multiple curtain calls to a full house standing ovation.

Sharon D. Clarke is equal to him on all levels. Her characterisation as an endearing yet long-suffering wife is perfect, she is loveable to a fault but switches seamlessly to show the vulnerability and emotional anguish of both a mother and as a wife. Couple this with her beautiful singing voice that she uses on a couple of occasions and you have a truly magnificent leading couple.

Sope Dirisu and Natey Jones complete the family unit as the two brothers and also give fabulous performances. Their jumping between grown up adults for the present day, and school age children for Willy’s flash-backs and visions are highly convincing, and the relationship between Dirisu as the hardened and troubled elder brother and Jones’ more laid back, cocksure and cheeky younger of the two matures credibly. They are certainly a family unit.

The ensemble and supporting roles are all played very well. Particular plaudits go to Trevor Cooper as the hilarious Charley. His relationship with Willy is unquestionably reminiscent of longstanding camaraderie, the bickering and constant competition between them akin to two brothers as is often the case with close friends. His part often offers the extra comic relief required to soften what is at times a very dark piece, but he is also more than capable when it comes to showing his love, support and desire to help his companion.

Death of a Salesman is powerful, starkly blunt on occasion and brilliantly acted. It could perhaps be condensed a little, as at around three hours it is extremely long and some of the scenes felt a little over-extended, but fortunately almost everything else about it makes up for that.

The additional racial persecution undertones do not feel out of place and add to the feel of the piece, and everything from the staging to the lighting gels faultlessly. It is certainly one to check out, and those who missed the opportunity to enjoy it at The Young Vic will definitely not want to pass up the opportunity to see it this time round.