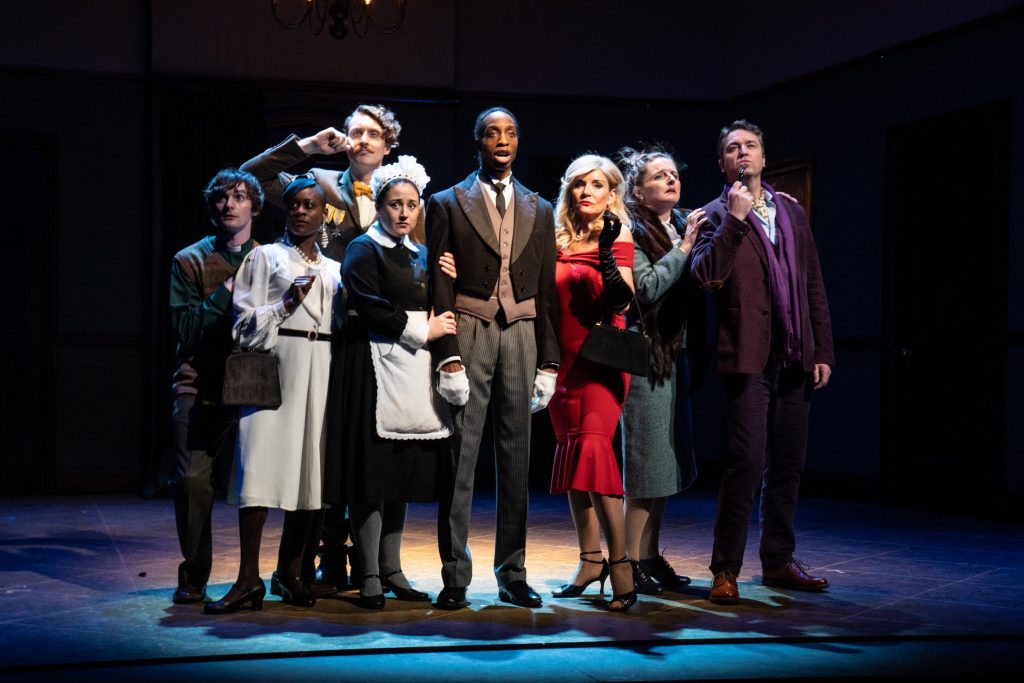 Debuting last month at Bath’s Theatre Royal, Cluedo is a new offering from Mark Bell, the director of The Play That Goes Wrong. This week, it’s playing at Birmingham’s beloved Alexandra Theatre until Saturday. The play will then tour the country before wrapping up in July.

Cluedo features a fabulous ensemble cast, including Michelle Collins, who will be recognised by many for her past roles in EastEnders and Coronation Street, and Daniel Casey, who appeared in Midsomer Murders as DS Gavin Troy, playing Miss Scarlett and Professor Plum, respectively.

Perhaps calling Cluedo ‘new’ is a bit misleading. If you go way back, its source material is the iconic murder mystery board game of the same name, which was invented in Birmingham during WW2, and has since become a game cupboard staple.

More recently, the board game was the inspiration behind the 1985 American movie, Clue (so-called because the game is called “Clue” across the pond), which was a box office flop, despite starring Tim Curry. It did however gain a cult following later down the line, and the Cluedo of 2022 is based on Clue’s screenplay.

Set in 1949 in a manor house near London, the play is distinctively British in its humour (there are various jokes about Tory corruption, for instance) and its casting. There are some Americanisms, though, as the owner of the mansion where the play’s action takes place is called Mr. Boddy (a name which the writers get plenty of puns out of). In the UK game, he’s called Dr. Black.

As in the play’s board game namesake, everyone in Cluedo is under suspicion for murder. An eccentric array of guests accused of corruption have been invited to Mr. Boddy’s abode for dinner: Miss Scarlett, Professor Plum, Colonel Mustard (Wesley Griffith), Mrs. White (Etisyai Philip), and Mrs Peacock (Judith Amsenga), and Reverend Green (Tom Babbage).

They are locked inside, the windows blocked, and the threat of the imminent arrival of police has all of them in jitters. Who among the party is guilty of murder? As the night progresses, the number of corpses in the house increases along with the dramatic tension. It’s a grim storyline, but it’s approached with so much mischief that a laugh is never far away.

At two hours (including the interval), Cluedo feels well-paced. Most theatre-goers will have been to a play where the bloated first act has you internally crying for an interval NOW, please. But Cluedo is so action-packed that there’s hardly a dull moment. When the first act ends, a sense of excitement is palpable among the audience about what’s to come next. And it keeps up the momentum right until the end.

There’s some top-notch acting talent on display here, but the standout performance of the night comes from Jean-Luke Worrell, who is perfect in the role of the suggestive butler, Wadsworth. The knack Worrell has for advancing the story through his facial expressions and hand gestures is truly exceptional, and sure to delight anyone who enjoys theatre that doesn’t take itself too seriously.

Overall, there’s little to criticise about Cluedo. It’s polished (almost immaculately so) at the same time as being campily hilarious, with a script full of one-liners. It’s so fast-paced that some theatre goers may struggle to keep up at times, but this pacing is also part of what makes it so enjoyable to watch. If you’re looking for a barmy night of murder mystery high jinks, Cluedo will not disappoint.