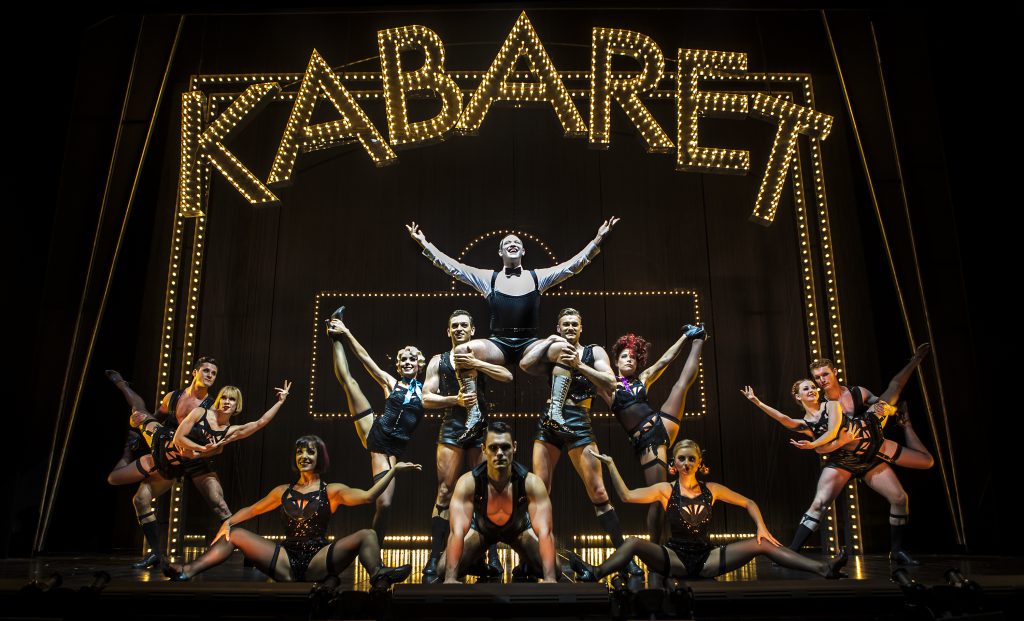 There is no way that a classic musical set in pre-Nazi Germany should resonate with a 2019 audience, much less draw parallels to today’s society. However that is exactly what Bill Kenwright’s revival of Kander and Ebb’s salacious and iconic musical Cabaret does.

Set in 1931 Berlin, Germany is living in the shadows of the Nazi party’s quiet rise to power. Cabaret focuses on the night life of 30’s Berlin and the seedy Kit Kat Klub specifically. The narrative revolves around American novelist Cliff Bradshaw who begins a relationship with the effervescent and beguiling English cabaret performer Sally Bowles.

The multi-talented John Partridge opens proceedings as the flamboyant Emcee, fresh off the back of the phenomenal success of Max Vernon’s The View Upstairs. Partridge is no stranger to taking on incredibly layered and nuanced roles, and he delivers a performance here with his usual flair and consummate levels of class and panache. Cabaret focuses on several story lines and Emcee is the glue that holds the narrative together. Partridge is a gift in this role; his vocals are on point and his movement both dexterous and natural.

Sally Bowles is arguably one of the most iconic roles in theatre and has been embodied by several legendary accesses including Judi Dench who was cast in the original 1968 London production. More recently Emma Stone and Michelle Williams have tackled the role on Broadway. However the most iconic and famous incarnation of Sally Bowles was that of Liza Minnelli who embodied the role when Cabaret was brought to the big screen in 1972. The movie version was loosely based on the play, with only six original songs included, but was a huge commercial success. Liza took home an Academy Award for Best Actress for her performance in the film, which marked her first time singing on-screen.

To take on a role of this magnitude and do it justice is no mean feat. Kara Lily Hayworth more than rises to the challenge and truly makes the role her own. Her accent is perfectly executed and she oozes confidence, class and an alluring sophistication in her portrayal. Her solos of Maybe This Time and Cabaret demonstrate her exceptional vocal placement and rich soprano tones. She is a revelation as Sally and it’s clear to see she is relishing every moment. She is complimented by her leading man Charles Hagerty who is a joy as the morally conflicted Cliff. This is Hagerty’s second turn in the show returning to the role of Cliff after playing him in the 2017 UK tour. He is clearly at home with the character and his chemistry with Hayworth is both believable and natural.

Stage and screen stalwart Anita Harris steps into the role of Fraulein Schneider whose relationship with James Paterson’s Jewish shop keeper Herr Schultz offers an alternative perspective on the perils of developing relationships in the face of rising Nazism. Harris perfectly embodies Fraulein Schneider’s heartbreak at being forced to choose between following her head or her heart and what that means for her future happiness. Indeed, some of the more highly charged and emotional moments come from the aching duets between the couple.

The wider ensemble is also strong and executes Javier De Frutos’s fine choreography with ease and style. There is absolutely no weak link in this cast and each member of the company maintains an enviable level of energy which is sustained throughout the show. In fact, Cabaret is so polished it’s hard to believe that this is only the second week of the tour. There is a palpable chemistry between the cast which is likely due in part to the intimacy and trust required between them to execute some of the more physically demanding and emotional scenes.

For a Kenwright touring production, the set design is surprisingly intricate and detailed, successfully transporting us to a decadent and debauched Kit Kat Klub. The set is complimented by Tim Oliver’s lighting design and Dan Samson’s sound design, with each competent part doing their bit to cultivate authenticity and a legitimate and immersive ambience. The costumes don’t leave much to the imagination but are clearly in keeping with the subject matter and serve to add to the believably of the piece.

Any piece that includes Nazism as a theme is always highly emotive and the appearance of a swastika nearly always yields a sharp intake of breath. This production of Cabaret does not shy away from that and is actually quite confronting. It’s well known that the Kit Kat Klub serves as a metaphor for the ominous political developments in Germany and the danger for anyone that didn’t fit the Aryan master race mould.

With extreme political unrest unfolding both in the UK and the USA and the emergence and legitimisation of far right views, anti immigration and a seeming backward steps in terms of tolerance, acceptance and equality, Cabaret provides a sobering reminder of how, when these things are taken to the extreme can have deadly consequences.

You don’t hear in pin drop in Wolverhampton Grand as Partridge delivers the Finale so softly sung it’s barely audible. It’s rare that a final moment of a musical leaves an audience in silence, yet such is the power of the final scene that the applause is delayed just for a few moments – an unbelievably powerful and poignant moment which truly encapsulates the power and magic of theatre.