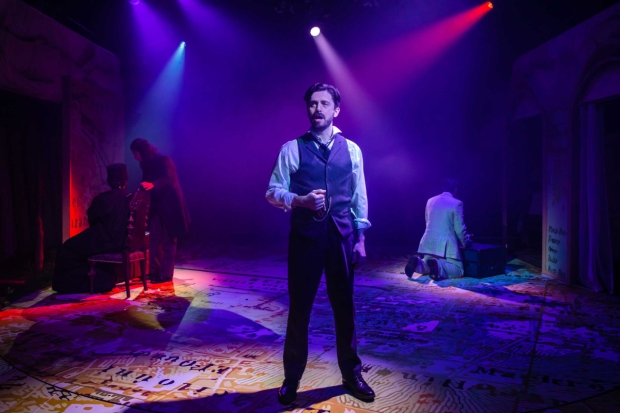 I visit the theatre often, but as someone who is of Turkish heritage, it’s sadly not often at all that I get to see myself or feel represented in stories, casts, creatives, or cultures within theatre. In fact, it feels like sometimes MENASA is forgotten about. The theatre community has been calling out the industry for more representation and diversity for years, and it seems there is finally being some change implemented. Nadim Naaman and Dana Al Fardan are the creative team who are bringing change and advocating for representation for the Middle East in theatre, with both Broken Wings and Rumi the Musical. This representation within cast, creatives, and stories has been long overdue but their incredible work has been well worth the wait.

Broken Wings is a breath-taking story based on Khalil Gibran’s poetic book of the same name. Performed in a unique and stunning manner, it is a show the West End was missing. This show first had a semi-staged concert run for a short 4 day only event at the Theatre Royal Haymarket in 2018 and has now just re-opened, this time as a fully staged musical, for a 4-week run at the Charing Cross theatre. And I can safely say that this is not a show to be missed.

London is known and celebrated for being a vibrant city full of people from all walks of life, so many cultures all in one place – hence, it only makes sense to have West End theatres match that. Broken Wings brings this culture and vibrancy to life, the culture and vibrancy that was needed in the West End. Performed in the round on a turning revolve, with direction from Bronagh Lagan, movement direction from Philip Michael Thomas and assistant directed by Teenie Macleod, this type of staging feels intimate and immersive, and audience members can’t help but feel like wherever they are sitting, they’re right in the heart of the show and story. With this staging, audiences never feel like they are missing out; there is always something for audience members to see as there isn’t a side better than the other.

It goes without saying that the music and lyrics in this show – both by Nadim Naaman and Dana Al Fardan – are stunning, aided with musical direction from Erika Gundesen and orchestrations from Joe Davison, but the set, costumes and lighting are also sublime, making this show a feast for the eyes. Gregor Donnelly and Nic Farman are responsible for the set, costume, and lighting respectively and, from the moment you walk into the auditorium, it feels like you are transported. The map of Beirut on the floor, the flowers on the ceiling, the gorgeous woven carpets, the added details on Gibran’s desk. Whilst these are all small details, they add so much to the production. This set combined with the beautiful lighting and costumes really brings Lebanon to life and makes it believable for audiences of where the story unfolds. It is this creativity that ensures that as if the cast alone were not enough, these visual details add to the show and make it a wonder to watch.

Leading the show is the co-composer Nadim Naaman himself, playing the elder Khalil Gibran, with Lucca Chadwick-Patel playing the younger Gibran. Their performances are both stellar, their emotions so authentic, raw and genuine. Similarly, their voices are incredible and blend together sublimely, such as in the song ‘Selma’. All of this combined leads to such beautiful mirroring of the two roles that there is never a shred of doubt who they both are, and it’s so believable to be watching a younger and elder version of the same person display their story right before your very eyes.

Noah Sinigaglia takes on the role of Selma, with whom Gibran is utterly besotted. Based on her performance, it’s not hard to see why. Bringing grace and genuineness to the role, she has a stunning voice that blends with Chadwick-Patel’s in an equally stunning way. The chemistry between them is palpable, especially in the hopeful and joyful song ‘I Know Now’ and it is so easy to be swept up in their love story, to feel their frustration and anger as they fight and fail to be together, and the heartbreak they both experience – the latter being so evident in the particularly heart-wrenching number ‘Til Death Reunites Us’, where you’d struggle to find a dry eye in the house.

Besides the young lovers, there is a stellar cast making up other roles who elevate the show. Yasmeen Audi, Haroun Al Jeddal, Soophia Foroughi, Alex Kais, Johan Munir, Ayesha Patel, and Stephen Rahman-Hughes complete the company. Whilst this show may not have a huge cast, they do have all have huge energy and passion, which is evident in all their performances – individually and combined. From start to finish, the energy is maintained, and it’s hard not to get drawn in and lost in the show. The ensemble numbers such as ‘All I Longed to See’ and ‘Spirit of the Earth’ are so energizing and rousing, it would be hard not to lose yourself in their emotions.

Every performer and character in the show takes the audience on a journey. There is Naaman and Chadwick-Patel as Ghibran falling for Selma, learning about life and love, and ageing before our eyes; there is Sinigaglia as a young and gentle Selma who we see change as she falls in love, is forced into a life she does not want, then struggles with both hope and misery, whilst mourning for so much at one time. It is a tricky feat to be able to take characters on such journeys in a relatively short time, but every single person in this cast is remarkable and gives breathtaking performances.

Whilst every single cast member is fantastic in their own right, Benjamin Armstrong, in particular, should be praised. On the lead-up to and including on their first preview, Broken Wings had one cast member missing. Armstrong then stepped in and learned the role in just 48 hours! It would have been impossible to tell that this was a last-minute cast change if it wasn’t something you already knew prior to the show; Armstrong slotted into the show and performed so at ease, really showing the amazing work of understudies and swings – especially as someone who wasn’t actually an understudy or swing in the first place!

All of this above combined is more than enough to make an incredible show, yet there is still more that makes it a perfect piece of theatre. The culture of the Middle East being brought to life was enough to move me to tears; from small things such as the way the characters greet people to the way coffee is served, to the larger cultural details such as Selma’s wedding, which moved me particularly. Not only is it a significant plot point that is designed to make the audience feel, but for me, it felt like I was watching a wedding ceremony on stage that was almost exactly like weddings I had attended myself of my own family members. To see that – a wedding from my own heritage – happening on a stage in London’s West End, heck, to see a whole show celebrating the culture of my own heritage – the impact of that cannot be understated.

Broken Wings is a love story. That much is true. However, that is not all it is. It’s a story of love, hope, gender equality, what home means… and it is a story that is timeless and is as relevant today as ever. It may be set in the past, but these themes present in the show are still applicable to 2022. Furthermore, Broken Wings is so much more. It is so much more because, through this show, Naaman and Al Fardan have broken down stereotypes of the Middle East and the people who derive from there; Broken Wings is a celebration and a love letter to the Middle East.

All that being said, Broken Wings may be set in and be a celebration of the Middle East, but someone with no prior knowledge of what life is like there would still be able to thoroughly enjoy this show. This setting is not by any means a barrier to people learning about lives different from their own. It is accessible to everyone, and this delightful show would be a fantastic way for people to learn about Middle Eastern culture whilst being engaged in such a captivating story. Similarly, a show being different from what someone has grown up with does not have to be a barrier to someone enjoying it. This is a story that everyone can see part of themselves in, everyone can relate to, that it would be near impossible to not appreciate it.

Broken Wings is an awe-inspiring show. This production showcases that the Middle East deserves representation too; it shows the talent of MENASA performers, and it shows that Middle Eastern stories matter too. The impact of having a show running in the West End that is not only set in the Middle East but is also put on by creatives and cast who are all exclusively MENASA cannot be understated. Everyone deserves to be seen – be that on stage through cast or musicians, or off-stage by people on the creative or technical teams who also work tirelessly to make shows happen. Everyone deserves to feel seen, to feel heard, to feel represented, and to feel like they have somewhere they belong. With Broken Wings in the West End, this show is providing all of that to MENASA people and the impact of that is not lost on me, not by a long shot. It means more to me than I can fully demonstrate in words.

Anyone who gets the chance to witness this show during its 4-week run is beyond lucky and is in for an absolute treat. After loving the concept album, the show transcended my expectations and took my breath away. Every single person who has helped bring this show to life and make it what it is should be beyond proud of themselves; they have more than outdone themselves with this incredible production.

I am more grateful than I can say to have this musical running at the Charing Cross theatre and know it will be one which I return to as much as possible in the 4 weeks it is there. I only hope when it closes, there is still a future for it, as I know it will be sorely missed. A captivating and beguiling show, Broken Wings is an experience not to be missed, an unforgettable and memorable one. I challenge anyone to go and see Broken Wings and to leave without having shed a tear or having their heart captured by this magnificent production.